Glamour became unglamorous in the infancy of the 2010s. Designers were disinterested in portraying traditional notions of glamour and hardened their edges, deployed ugly chic methodologies and entered a heightened normality stage. To tell the truth, it isn’t always fun to watch a disgruntled model storm the runway in a hoodie and thigh high boots or jeans and a denim jacket; one yearns for the Steven Meisel-lensed Balenciaga advertising campaigns from the Ghesquière era or John Galliano’s Dior iteration. Michael Halpern, graduate of Central Saint Martins, is an American designer showing in London and his designs are Glamourous with a capitalised, underscored and italicised G. Inspired by fashion movements in the 1970s, dancing at Studio 54 and singer Cher, his work is pointedly referential of a bygone era, where dressing up and hedonism were simply ways of life.

He gave his Fall 2017 collection—his London Fashion Week debut—a dystopian twist with his venue of choice: a bare, exposed brick retail space in St James. A dystopian disco in London, how fitting? The soundtrack too was rather unnerving: there was a haunting ringing sound to accompany the final procession, for example. 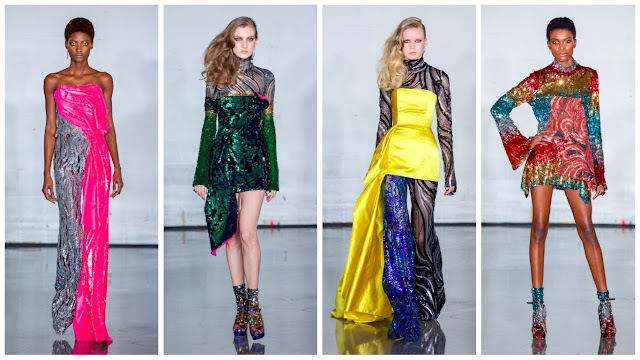 He rendered his designs in jewel tones and opted for a beautiful melange of fabrics. Double duchess satin, sequins, silk… Intricately embroidered sequins shimmered and glistened in the harsh, bright lights of the venue. They flickered like fireworks dancing across the night sky. One could imagine characters in a seventies-inspired film bedecked in Halpern’s beautifully bedazzled outfits. However, there is something incontrovertibly modern about his creations. Although they’re an honest ode to the 1970s, they aren’t swept up in the epoch—it’s a fantastical foray into the future, with elongated hemlines and flattering cuts.

The dearth, or death, of glamour—whatever way you want to look at it—over the past number of years is symbolic of fashion’s cyclical behaviour. However this jolt of electrified energy from Halpern has been something this critic has been patiently awaiting. My writing roots belong in red carpet coverage and this is a dreamland of dresses and jumpsuits fit for movie stars. They are enrapturing, wonderfully weird.


His expertise was acquired from stints at J.Mendel and Oscar de la Renta, two American houses with commercialistic viewpoints and an insistence on pushing stereotypical visions of glamour. Couture sensibilities are evident in his work; he consults for Atelier Versace, Versace’s couture division. There are undoubted whiffs of subversion in Halpern’s designs and it earmarks him as one to watch. His affinity for blurring the lines between good and bad taste, for one, and the suppleness of his silhouettes, their over exaggeration and aggressively outlandish lengths, present these facts. Welcome to London, Halpern.
Posted by Paulidoodles at 6:00 AM