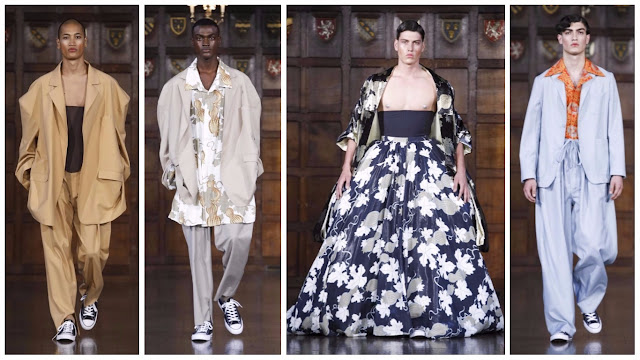 The landscape of menswear design has shifted considerably in the past decade. Not only has the industry blossomed and multiplied in size, but the themes which designers explore are reshaping the way men dress today. Challenging masculinity has been the cornerstone of the development of the menswear industry. Edward Crutchley, an upcoming designer at London Fashion Week Men’s, is at the fore of this rebuff against traditional notions of masculinity. His Spring 2018 show, presented at The Ironmonger’s Hall in June, commented on the irrelevance of gender, the relevance of sex.

His show was densely packed, filled with wide-reaching ideas and global touchstones—“Northern splendour, remote Arcadia”, tribes in Borneo, adolescent males in Japan, all through the lenses of Victorian and Elizabethan England. A multi-epochal exploration of masculinity, the show spotlighted “manly pomp, feminine vigour.” To say gender the show’s impetus wouldn’t be a misjudgement. Crutchley was thinking about the 1980s, with designers such as Jean Paul Gaultier and Giorgio Armani appearing on his mood board. Specifically, he was referencing early Armani, the deflated 80s volumes, the dropped shoulder and the wide-shoulder. He was interested in the interplay between 80s power suits and gender ambiguity. One look for example combined a taupe, oversized blazer and an extravagant corseted, full skirt. Another keenly observed the principles of 80s sportswear but rendered it in a decadent print, implying the feminine vigour. The manly pop derives from the prints in the collection. Perhaps more interesting than the 80s power suit contrasting with the subversion of gender is the historical references juxtaposition with the notions of masculinity.

Historicism affords the theatricality of expression, the general acceptance of the masses— men’s dress in the 15th to 19th centuries were characterised by different approaches to masculinity. From the Edo-era wakashū he studied the inclusion of the kimono in their work. An owner of a kimono, Crutchley brought his to a factory where he studied how to fashion one himself. The ones in this collection were elaborate, luxurious.

Commercialism was something Crutchley worried about this season, and misinterpretation. It is common for designers to question the commercial viability of their work and so they should, if they want to continue working in the industry. However, despite the possibility the press might misinterpret this work and buyers mightn’t want to buy certain pieces, he charged full steam ahead to create looks that were important to him and his interests. Whether you enjoy the aesthetics of it or not, one can’t help but appreciate the self-serving agenda of a creative designing something they’re passionate about. Generally, it produces good work. This was a thoroughly engaging show.