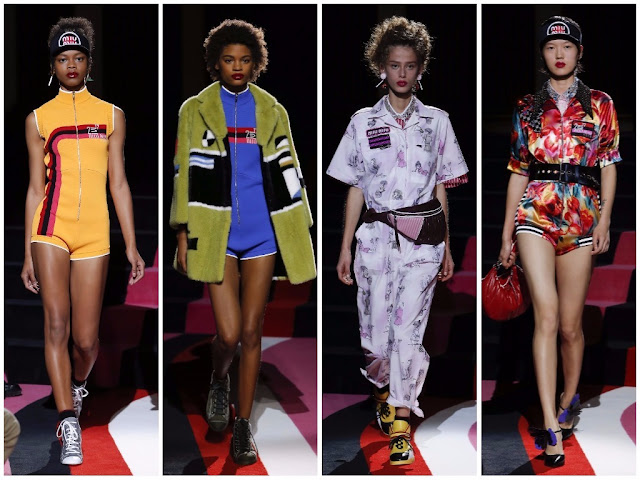 It wouldn’t be a couture week without an extravagant opening. Miuccia Prada’s Miu Miu provided an impetus for the week; it was a couture week which saw an influx of ready-to-wear, pre-collection and seasonless shows. Miu Miu is of course Prada’s disarmingly punchy ‘sister’ label—although Mrs Prada has highlighted her aversion to the term in recent interviews. Miu Miu boasts fundamental differences to Prada, the more serious counterpart in Mrs Prada’s creative lexicon: firstly, its bi-annual ready-to-wear and respective pre-collections are shown in Paris; secondly, the label operates at breakneck speed, developing the clothing a mere two weeks ahead of the show to allow for an instinctive creative response to whatever Mrs Prada feels at a given time. This time it was “cabaret”, “powerful women”…

What better—and more defiant—place to host the Miu Miu Club for the Resort 2018 season than the Automobile Club de Paris, a private members men’s club in the 8th arrondissement, adjacent to the recently revamped Hôtel de Crillon. A men’s club on a Sunday night in July, transformed for a fancy womenswear show—a statement in itself. The musical proceedings were kickstarted by Canadian rapper Tommy Genesis, dressed in a baby blue one piece before segueing into a significantly less offensive assortment comprised of Marilyn Monroe’s ‘You’d Be Surprised’, Rita Hayworth’s ‘I’ve Been Kissed Before’ and Nicole Kidman covering ‘Diamonds Are a Girl’s Best Friend’. It’s the juxtaposition of good taste and bad taste, a familiar tenet of Mrs Prada’s work, that continues to complement her girly Miu Miu shows.

Although cabaret was on her mind—there were inflated bum-shorts and rompers to assuage the motion—there were also mechanic references, with the girls’ outfits appearing as 50s pin-up-inspired uniforms, equipped with race-car driver graphics. It was glamorous Formula 1, seen through the eyes of an Italian woman who keenly observes the codes of girlhood. (The show reminded one of the fame-obsessed Spring 2011 show or Prada’s eponymous label’s Spring 2012, with flames and retro car graphics.) There were many styling tricks at play here, courtesy of Love magazine’s Katie Grand who is behind all styling operations at the house: half-on, half-off boiler suits; wide-shoulders, wide-hips and cinched waists. She adapts her own stylistic vocabulary to the wonderful world of Miuccia Prada, mostly successfully.


Substance isn’t engrained in Miu Miu the way it is at Prada—this is a playground for girlish delights, where Mrs Prada can dress the fantasy woman up or down. She is a blank canvas and she has been interpreted in a multitude of ways. This season Mrs Prada endeavoured to find yet another way to express her desire to empower women through clothing. She did so exceptionally, fusing the cabaret dancer and the mechanic. Remember, it all unfolded at a men’s club. It’s no longer a man’s world, it’s Mrs Prada’s. 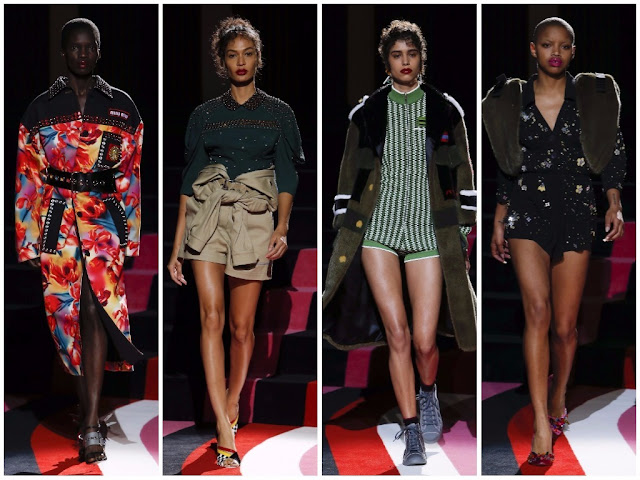 Posted by Paulidoodles at 9:30 AM