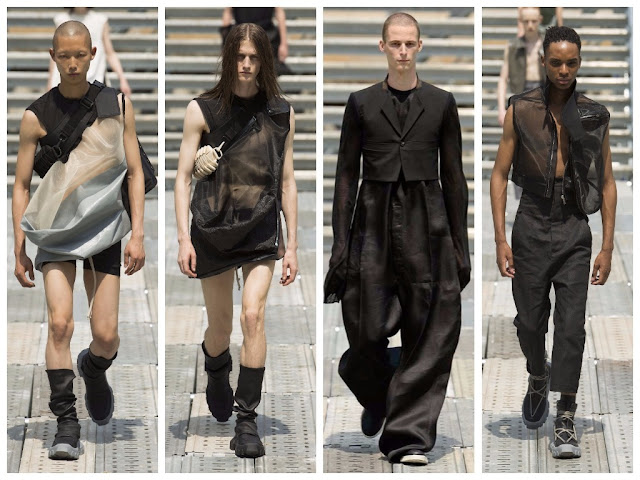 Darkness into light: Rick Owens exchanged his subterranean show space at his Spring 2018 menswear show at Paris Fashion Week for a défile en plein air. A scaffolded maze was erected outdoors at the Palais de Tokyo on a sweltering early summer’s day for his models to commandeer. The sheer scale of the venue reflected something Owens wanted to achieve in his collection—he wanted heroism, might and power.

This show of heightened poeticism was rendered in a characteristically limited colour palette and questioned the basis of his brutalist aesthetic. (Oftentimes his work is interpreted as ostentatious and frighteningly standoffish but, conversely, it’s rather poignant and gentle.) This was a marked departure from the outset, what with the outdoor production where models walked godlike over water.

Owens insistence on anti-normality has been the cornerstone of his success. His catwalk collections are the antithesis of normality and pride themselves on an avant-garde, abstract expressionist methodologies; it’s one founded on a gestural approach to the body. Not readily apparent here, one recalls last season’s menswear when his models were gloomily engulfed in puffer jacket contortions and besieged by billowing bottoms or layers upon layers of organza for Spring 2017—it’s a recent phenomenon in his design process but in its artistic inclination, it is determinable as wildly original and assertive in its worldly proclamations. The aim for Spring 2018 was to respond to the chaotic epoch we find ourselves in. There were some intriguingly odd shapes that defied standard notions of what we expect our bodies to be encased in. They were subtly supple but generously welcoming—generally, they can be registered as intimidating but these were totally pleasant.

Elsewhere, Owens removed the element of the bomber jacket—the signature menswear staple—and replaced it with blazers and cropped sleeveless jackets. The designer is always spotted taking his bow at the end of his show in a sleeveless vest. There were plenty of tailoring options here. Personally, I was drawn to the beautiful sleeveless biker jackets that captured an effortlessly endless summer style and inspiring insouciance reserved for film, photography and literature—timeless fashion, a positive introduction.

Although practicality was on his mind—this was certainly his most instantly sellable to date—there were some perversities. Fetishism was visible in those tiny shorts styled with luxurious leathers, the deconstructed t-shirts which resembled bondage items; lustrous leathers were almost slimy in the sunlight, an Owens-ian fusion of discomfort and luxury.


Despite their inclusion, fetish wasn’t the most interesting part of the show. Its strength was in its confident delivery. Owens’ mastery of a designer isn’t lost on us: it never will. He believes in balancing the avant-garde and ‘wearability’—the most banal term in fashion, but ’twill suffice—and without his invaluable contribution the industry would rapidly stagnate. Instead, he slows down the process. Whether he’s being overtly political as in recent seasons or transporting us to somewhere removed from the global conversation, his vision is unmatched and his mark indelible. Why can’t there be more like Rick Owens in the world? 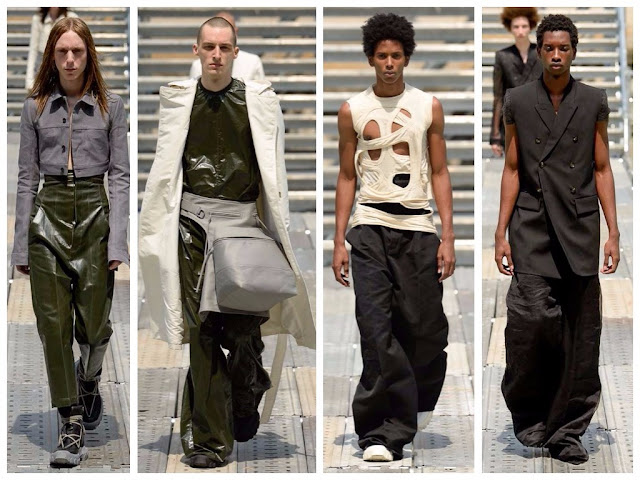