When asked about which designers inspire him Raf Simons highlighted that Virgil Abloh’s Off-White doesn’t. “He’s a sweet guy. I like him a lot actually. But I’m inspired by people who bring something that I think has not been seen, that is original.” On one hand, you can see where Simons is coming from—banality, the mundanity of the street is emphasised in Abloh’s work. In 2012, he founded Pyrex Vision, a streetwear brand where he screen-printed logos onto Ralph Lauren rugby shirts and Champion t-shirts. He is rather focused on remixing, as opposed to the fabrication of something “new-new” (to use Simons’ words again).

Spring 2018 marked his first guest appearance at Pitti Uomo in Florence. (Off-White is Milan-based with production based in Italy also.) The Palazzo Pitti at night, the audience was enveloped in darkness. Darkness was used to the designer’s advantage; he collaborated with neo-conceptual artist Jenny Holzer who was responsible for the textual projections on the walls of the renaissance building. Poetry was streamed on the walls; guest split their attention between spotlighted models and the words before them—one imagines an intense viewing experience. Syrian and Palestinian conflicts were referenced with the use of this poetry—to date, it was Abloh’s most politically aware show. He sent his guests orange t-shirts with life-preserver instruction graphics on them, a quote reading “I’ll never forgive the ocean” on the back. He was thinking of the plight of the refugees, many of whom drown when traversing the Mediterranean in search of a better quality of life, escaping war-torn areas in Syria and Africa.

Political awareness has never been Abloh’s forte. He prefers to contextualise the street in six months time for millennials. However, this is an important shift. The son of Ghanaian immigrants, the Chicagoan manages to tap into his family history to present this new political iteration. Commenting on the war in Syria, the refugee crisis—as I have discussed in the past—can be highly problematic, depending on your perspective. Many capitalise on the backs of others’ plight. Here, we have a more authentic viewpoint, from a designer who is the offspring of immigrants. His Instagram presence, his position as Kanye West’s creative direction, and his polymathic sensibilities will hopefully raise awareness for these issues. His fusion of fashion and art cement this fact.

The clothes weren’t as artistically-inclined as the presentation but they were interesting nonetheless. Coats were influenced by life-vests, clearly; fabrication was clinical, chilly almost; notions of protection were at play, as they tend to be in most collections nowadays. Readily apparent in his work are the influences of Japanese designers Yohji Yamamoto and Rei Kawakubo’s Comme des Garçons, his critic Raf Simons, Russian star Gosha Rubchinskiy. Although this is the case it links back to Abloh’s affinity for remixing. It doesn’t have to be truly original, so long as it serves a function to appease the Instagram stars that will purchase these clothes… Derivativeness doesn’t deter from the clothing either, some of them are quite fashionable and, more importantly, desirable.


“Temperature”, the show was entitled. Abloh turned up the heat, finally. 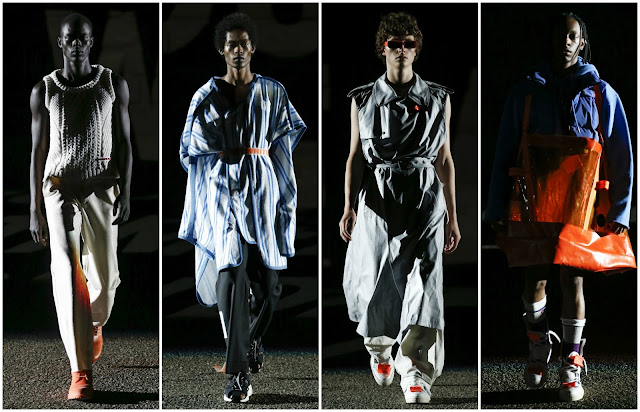