There was about as much headlines made from Grace Wales Bonner's guest list at her menswear show in January as there was about the show itself. Having been the recent recipient of the third LVMH Prize, the London-based designer has upped the ante; she now has the chutzpah and standing to invite whoever she feels deserving of a place at her show--noticeably many top editors were absent. It's always the case with these prizes that something happens--a catalysis to their creative success, a removal of all prior hindrance to auspiciousness--after their reception. It happened with Thomas Tait and Marques'Almeida after their victories; the respective labels' business increased fivefold and they injected more zest into their creativity. The €300,000 prize allowed them to reach full capacity. Wales Bonner had already been peddling along finely before this financial injection. She designs beautiful clothing for men.

Her oeuvre is punctuated by her exploration of black history, her pointed subversion and reimagining of black masculinity. She removes the hardness stereotypically associated with black masculinity and replaces it with an undoubted lightness, an earthy goodness hitherto unseen. For her Fall 2017 show she blasted music from gargantuan speakers borrowed from the Notting Hill Carnival.

There were disparate elements conjoined to produce this output: her time spent in Senegal at a creative retreat, the Caribbean culture that belonged to her ancestors and the appearance of it on her hometown London's streets, Renaissance portraiture converged. The emphasis placed on hand-craftsmanship in her collections perhaps derives from the hardworking and decidedly visually expressive cultures of the Senegalese. Faustine Steinmetz's production partook in the country. The ceremonial and celebratory penchant of the Caribbean Isles permeated the show with the proud procession of polished models. The ornamental beading and embellishment that underscores much of this show was undoubtedly inspired by Renaissance portraits; lavishness and opulence are underlined by her glitzy approaching to dressing men. 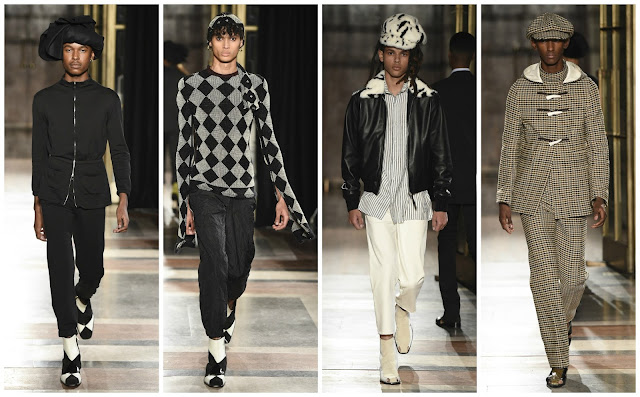 It's amusing to visualise men being slightly disquieted by the extravagance of Wales Bonner. Her work is ridiculously expensive, highly referential and wholly engaging. You can count on her shows for inventive remixes of classic items. Her manipulation of traditional suiting has long held fascination, with an enraptured audience indulging in her refreshing reissuing of mundane outfits. Blurring the lines between what constitutes masculinity and femininity forever consumes the discussions around her shows: wide neck tops, skinny-cut trousers, the overall quasi-feminine edges to her tailoring. She defies convention, certainly, but it's a pleasure to watch unfurl.

One can imagine men from Los Angeles to Lagos savouring the perennial grace and glory of Wales Bonner. There's a timelessness generally attributed to womenswear and seldom menswear that can be applied here. One could see a man archiving the crisp white double-breasted blazer with contrasting black buttons, it becoming a piece loaned to museum in the ensuing years.


She designs beautiful clothing for men. Most men don't want beautiful clothing: they want ease, comfort, functionality, conformity to streetwear cultures and underground subcultures. There is minimal room for individuality but here we have a designer who is pioneering a different type of craft; it's characterised by an in-depth exploration of history, an indulgent decorative luxuriousness unmatched by other emerging brands and a focus on creating truly sublime artefacts to be found in a man's--or woman's--wardrobe. Grace Wales Bonner has the ability to manipulate minds: men who don't want exquisite clothing will be persuaded. A beaded biker jacket has never been so irresistible.
Posted by Paulidoodles at 6:00 AM