In the eyes of the layman Rick Owens’ designs can come across as obtrusive, standoffish, like a violent expressionistic painting. However, the designs and designer are so much more than that. There is an undeniable softness that defines his aesthetic—I remind myself of the celestial Spring 2013 collection, a personal favourite of mine from Owens; a blissfully beautiful and dreamily ethereal outing. Despite his exploration of the world around us of late, there has been a certain positivity found within his work. His shows aren’t elegies for the loss of stability in the world, rather distinctive reactions: how to prepare for turbulent times ahead, how does it reconfigure the way we dress. 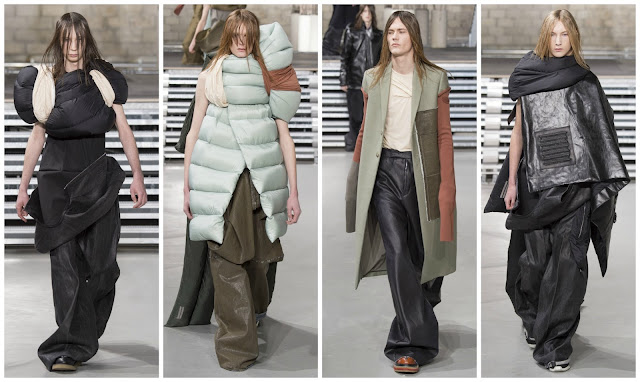 Owens has long been unorthodox is his design approach. He doesn’t conform to instant wearability but artistic expressions of emotions. (His being the recipient of the Geoffrey Beene Lifetime Achievement Award at the upcoming CFDA Awards has been met with overwhelming positive reactions.) HIs Fall 2017 menswear show was self-described “earnest”; it was a preparation of sorts. The cocoon-like shapes used, the bulbous fabrics that encased the body shielded the body from the turbulence we are left to negotiate, for our daily navigation of uncertainty.

Declaratively, doom has been the underlining mood of the past few shoes, albeit expressed with gentle yet wholly impactful force—the threat posed by humans to the environment; an imagined apocalypse. Owens wanted to move away from that. It was entitled ‘Glitter’, and as aforementioned was a hopeful distancing from the gloom of previous seasons. The colour palette reflected our planet, the vibrant array of hues present within it. There were bottle and wood greens, soft seafoam green, ochre and saffron, a washy taupe, moss. There was a balance of richness and softness, juxtaposed with the strength and purity of black and white.

One hunched model captured the extent of the idea of protection—looking like the abstract manifestation of a backpacker; his exaggerated puffer jacket outfit and slouchy trousers belong amidst the trees, amongst a rocky ruck of mountainous terrain, traversing babbling brooks—away from the incessant beat of city life. Secondly, there was a conceptual proposition of a sojourner, escaping life as they know it, their belongings attached to their body. It strangely reminded one of a sleeping back, coupled with a handful of belongings.


The finale was dominated by black, a sobering, all-encompassing colour. (An unnamed journalist was overheard comparing one of them to Darth Vader.) Solemnity and soberness, and even sombreness, are Owens’ forte—the avant-garde creations on his runway are closely linked with those feelings. It was never swept away by its melancholy, rather it was charged by an iron-willed perseverance.