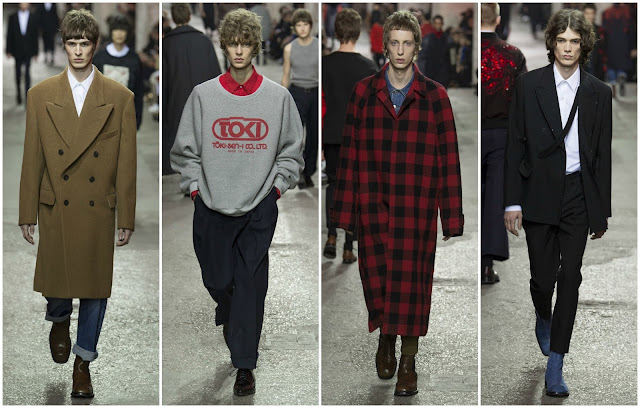 It’s wholly lamentable, the shift of focus from craft to marketing campaigns in the fashion industry. Yesterday’s post subject Dolce & Gabbana, and their recent Fall 2017 menswear show, signified the general mood and cultural shift that unfurls before our eyes. There is someone, conversely, who we could count on to always present us with a vision that isn’t obstructed by a savvy marketing manager’s notions of relevancy: Dries van Noten, one of the Antwerp Six, the group of designers that emerged in the 1980s. 31 years later and his oeuvre is still punctuated by a cerebrally eclectic elegance that distinguished him from his minimalist-inclined counterparts. He doesn’t use advertising campaigns, out of sheer respect for his customer—he understands they’re already inundated with imagery, he doesn’t want to add to the avalanche of advertising.

To rely solely on craft almost strikes one as radical in 2017. We have become desensitised to Chanel constructing a rocket ship with the ability to blast off or Anya Hindmarch having the Rocky Mountains fill her show space, Tommy Hilfiger transporting his clients to Venice Beach in Los Angeles or Dior taking their couture to Tokyo. These are evasive tactics, as I wrote yesterday. Mr. van Noten opts not to hide behind the facade of fashion as entertainment, but his collections are compelling and entertaining nonetheless.

Marking his 99th collection at men’s fashion week in January, in Paris, the Belgian brought back some staples and reworked or reissued them. He wanted to show what was relevant ten years ago is still contemporaneous, and considered modern. It was amusing to read Lou Stoppard’s report, in which she remarked how a young journalist backstage likened the exaggerated tailoring of his suiting to that of Vetements and the recent revival of pronounced shapes… van Noten noted he had designed the piece in 2008.

It is slightly off to call a show a ‘greatest hits’ collection because it conjures connotations to a CD one might find in their mother’s glove compartment, where the songs are the most popular rather than a neatly curated selection of the best songs. Van Noten directed his show in the direction of the more sombre elements that have permeated his work. Darker hues were predominant—blacks, greys, livid reds. There were whiffs of the punk movement—the violent reds, to this critic, were a contained expression of anger. The show’s mood—although celebrating the 99th show it wasn’t celebratory. Designed in the aftermath of the US presidential election, perhaps spirits weren’t high.


With just over thirty years of experience one hopes that there are another thirty in the making. Fashion is deserving of someone like Dries van Noten. He is a reminder, of sorts. Firstly, he symbolises what fashion used to be; although change is necessary, emphasis should be placed on craft seeing as that what the industry is about. Furthermore, he doesn’t conform to the marketing strategies set forth by every brand under the sun. Finally, his tactile poetry allows us to calmly assess and appreciate the beautiful things in life.
Posted by Paulidoodles at 6:00 AM