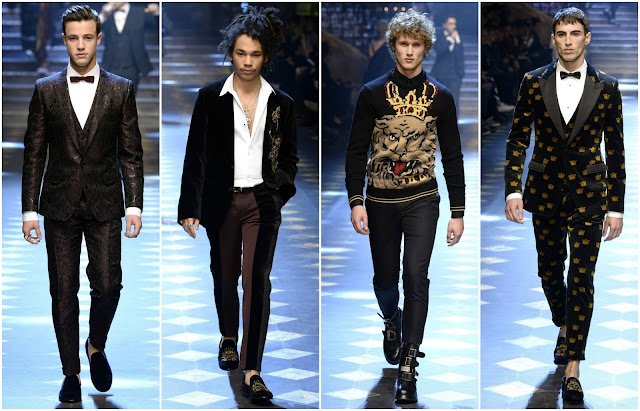 There were days when celebrities exhibited feats of fashion design on the red carpets they dominated, then arrived times where they were perched front row at fashion shows, and now they walk the runway productions they once watched. Domenico Dolce and Stefano Gabbana have well and truly engaged with celebrity culture in recent seasons with a pitiful attempt at remaining relevant in an industry with short attention spans. They recruited Bieber-lite Austin Mahone to perform live on the runway as the models made their exits; the casting was a lineup of Insta-stars, famous offsprings and relatives including Luka Sabbat, Lucky Blue Smith, Cameron Dallas, Jim Chapman, Marcus Butler, Rafferty Law, Presley Gerber, Levi Dylan. (Needless to say they inspired hundreds of hopelessly devoted teenage girls to throng to the venue's exits.)

If we are to look at this from fashion’s traditional perspective—an elitist viewpoint—one immediately jumps to lambasting the show for eviscerating the integrity of the fashion show. Fashion shows are walked by models—a profession not to be demarcated by moneyed teenagers that dominate Instagram feeds. Fashion exists in a dream world, removed from the quotidian—deploying Insta-stars on the runway is too connected with mundanity and it shatters the final pillar of industry respectability. Advertising campaigns, magazine covers, front rows have already been conquered by celebrity culture, and it appears now that the show format has been too.

Comparatively, there is the possibility that the inclusivity of the show is paramount. The boys used in this show represent different nationalities, sexual orientations and social profiles. Similarly the girls cast in the show—including Sofia Richie, Sistine Stallone and Imogen Waterhouse—are representative of different body types, heights. Their casting isn’t restricted by traditional beauty standards, which is positive in itself. The models chosen in the show carried out interviews backstage with members of the international press. One sentiment echoed throughout the questionnaires was that the clothes made the subjects feel good. The majority commented how they were permitted to style their own looks, hence suffusing the collection with a decidedly individualistic meaningfulness.

It’s true to say the brand’s intentions are open to interpretation. But the purpose of the show is to present clothing, and we haven’t yet discussed that. It was a classic case of utilising evasive tactics to detract from the clothes which, expectedly, were much of the same. Aesthetics haven’t progressed, nor should we expect them too. Men and women who shop at Dolce & Gabbana are there for opulent odes to Italy with a focus on family and a penchant for prettiness—although that’s subjective. Noticeably, 18th-century grandeur was emphasised; elaborate patterns, finely formal suiting. Additionally there was a sportswear element that cemented athleisure’s permanence in men’s collections; here, however, it prioritised luxury and polish, as opposed to a garment useful for exercising: the veneer of athleticism, sporting attitudes are more important than the actual act of exercising. Of the 112 show looks, one grew tired of the brocade suits after their fifteenth exit.

In a way this show democratised fashion and in another it tarnished it. In short, it was a messy effort, one too concerned with selling perfume to its cast’s legion of followers. It’s a mutually beneficial endeavour and if anything, it’s suggestive of what the fashion industry has become: a marketing mill, where product comes first and craft places second. All that inspires is sombreness. 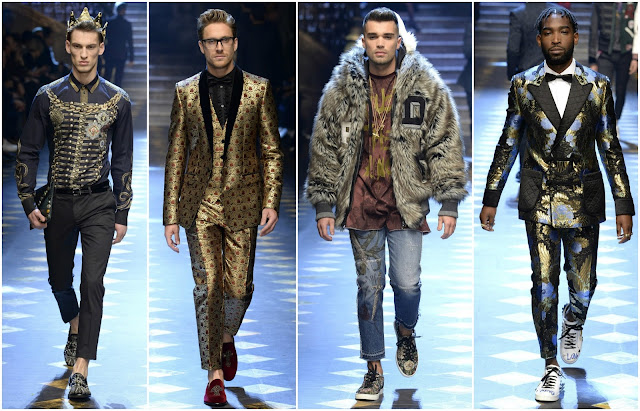