When the mentorship and safety net of Fashion East expires, it is common for designers to take a season off—or two. However, the oversaturated fashion calendar disallows this luxury; designers have no choice but to return the following season and if they don’t there is fear that they will be forgotten about. (Fashion is a lot like Hollywood in that respect.) Excitingly, Irish designer Richard Malone returned to the London Fashion Week schedule the season after his final Fashion East outing. The BFC Presentation Space hosted his tableau format show.

In previous collections he has referenced his mother’s Argos uniform, an outfit that his aunt wore to his holy communion as a child—his working class upbringing (a contrast to many fashion designers working today) lends itself continually. He prioritises comfort rather than restriction and his motive is to make women functional clothing. This season he looked to bus and train service upholstery, it’s something so ubiquitous but perpetually ignored. Speaking to i-D about the vivid colours he said, “in Ireland it’s quite good, because they’re grubby and old where I’m from, so you get proper old school 80s and 70s prints that hurt your eyes a bit.” I can attest to that —not that I’ve seen them in a while with the ongoing bus service strike that has paralysed the country’s transport system. 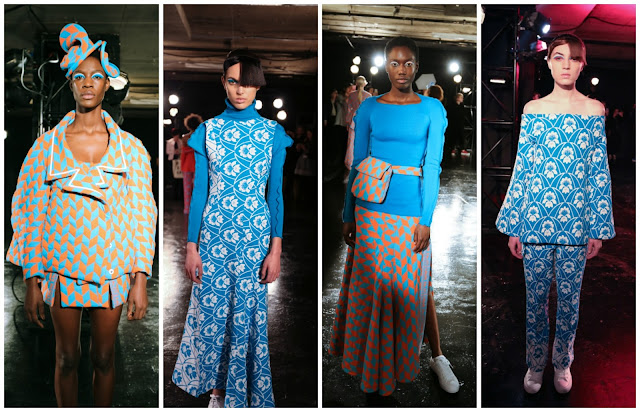 There were vivid colours, repeated patterns; florals and geometric prints; block colours and straight lines. Richard captured the oddness, the slight discomfort of looking at the sickly colours on public transport. However, there was something strangely delightful about the happiness found within the bad taste. It was a reminder of a bygone era, but also the present.

Nostalgia characterises much of his work. Whether he’s remembering the bizarre ensemble his aunt arrived at a Catholic church in, the caravan parties of his youth with bombastic rap music and how it contrasts to the depressing sameness of teenagers today, or the 80s and 90s bus service upholstery, the past is an important place for Richard. His garments never feel defined by the past, but there is an inherent link to it: some designers strive for newness and modernity but there are nostalgic inflections rooted in his oeuvre. Take for example the off-the-shoulder patterned blouse with bell sleeves in a dated cornflour blue with matching trousers—it belongs at a party where ABBA is on repeat, but a different styling could change the dynamics simply and prove it as a versatile item, not bound to the 70s or 80s.


Richard was shortlisted for the 2017 LVMH Prize, a few days after his Fall 2017 presentation. Sadly he didn’t make it as a finalist. It is a positive affirmation, recognition of his undoubted success. In four seasons he has developed his signature aesthetic, he enhances and enlivens working class codes and splices them together with couture-like craftsmanship. It makes for a rich experience, combining colour and fabrication. He’s doing Ireland proud on the world’s stage.

WWD
Posted by Paulidoodles at 6:00 AM