Eternal youth vs growing up. Poland-born, London-based designer Marta Jakubowski was thinking about the transitional period in a woman’s life where adolescence becomes adulthood and how to bridge the gap between the too. There is the instantly appealing allure of being a teenager forever, without responsibilities or any great preoccupations; you grapple with your identity and finding yourself. As an adult you are obliged to be one with yourself, and the world; you have to carve a social and professional identity and undeniably that must be challenging. Her interpretation of female self-actualisation was inspired by women in the 90s. Speaking to WWD the designer said, “I really feel like a lot of women back then dressed up for themselves, rather than trying to impress anyone.” Marta attempted to make that a possibility for women again, to empower them with her dazzling array of bold block colours, sharp tailoring and fascinatingly obscure shapes. 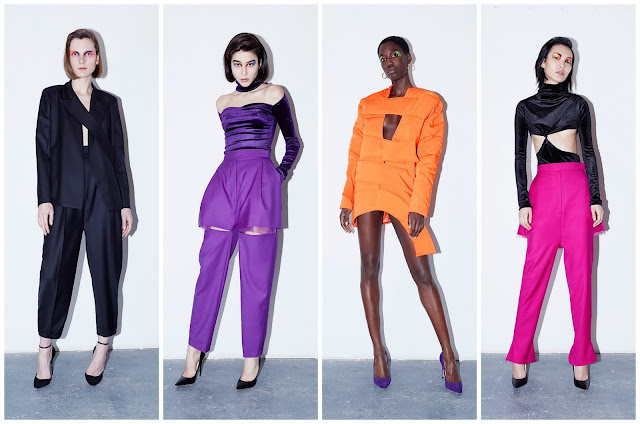 Marta has never been one to reduce fashion to wearability. Her pieces are tricky: the flesh-exposing drapery and sexy slashes in her garments are daring, to say the least. However, they represent unabashed portrayals of female sexuality that for so long have been suppressed by society. There were a pair of violet trousers slashed at the thigh, revealing tulle inlet; a cross-body incision was made on a marigold velvet top, a boldly 90s-homage-paying look; there was a bodysuit-cum-overcoat that was a performance look rather than an everyday look. Perhaps, it would’ve been worn onstage by Tina Turner, Sade, Chaka Khan, the women providing the sonic landscape for the show; Marta had no intentions on letting her proudly feminist operation be diluted in any way.

The rainbow fabric wall designed by production designer Gary Card served as the backdrop. The dizzying, vivid hues, with violet, charcoal, marigold and fuchsia skewered the epoch in mind. The girlishness of the brights juxtaposed with the darker shades presented us with a metaphor of the aforementioned eternal youth vs growing up. A magenta tuxedo-inspired one-piece? If that didn’t show signs of not wanting to grow up, to dress for oneself in an imagined permanent 90s dream state, then you could look at the asymmetric, sunset orange puffer-dress.


Last season Marta was influenced by her mourning, as a teenager, of her late mother and compounded this with other childhood memories. Youth, girlhood are the aspirations of the Marta Jakubowski woman but there was a decided change of state in this collection: things were filtered through an adult’s lens. (Add that to the list with the blatant subversion of 90s glamour, pushing bold, unashamed femininity.) It’s a decision that could prove successful commercially when the clothes hit the shop floor.
Posted by Paulidoodles at 6:00 AM