Something strange—almost paradoxical—happened during London Fashion Week Men’s (renamed from London Collections: Men) in January: with the decampment of megabrands Burberry, Coach and Tom Ford to womenswear schedules one would expect the press attention around men’s fashion week to follow suit, ironically it increased and the designer left reaped the reward.

Craig Green became the tentpole show during fashion in the departure of the Burberrys of the world. His Friday evening show is always eagerly anticipated and this season was no exception. He continued to advance his experimentalist aesthetic that focuses on developing a heightened normality, surreal clothing to match the world around us. In essence, he captures the bleakness of the world and channels it into something subdued, something serene, something surprisingly stunning. His dystopian-tinged universe is denoted by the utilitarian uniforms, the monochromatic colour palettes that would belong on citizens of a post-apocalyptic autocratic society. His Fall 2017 show was concerned with the “fear of the unknown”. 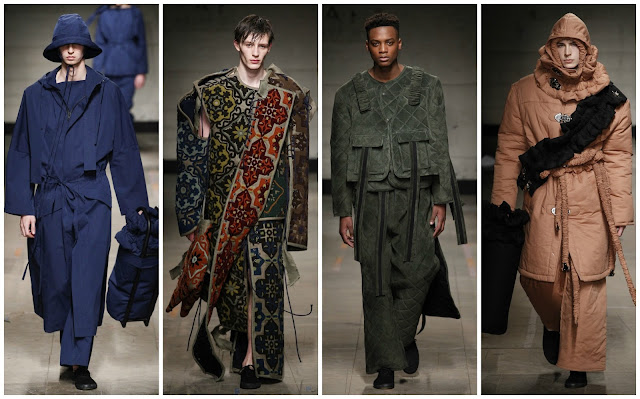 Protection and clothing as a means of protection has been something that Green pioneered from his debut. In the years since he began, that has never been as relevant as it is in the current political landscape with Trump and Brexit, the refugee crisis and engendered inequality around the globe. ‘Fear of the unknown’ is a suitable explanation for the events of the past twelve months—ignorance and lack of compassion triumphed over understanding and compassion. The clothes here reflected the dark days. The show opened with a navy blue boiler suit, followed by a hooded man in a similar outfit—both models’ eyes were covered, they hid behind their visor, without making eye contact. There were militaristic whiffs emanating from the uniform-inspired garments.

This progressed into something more poetic, both in fabrication and colouration. Four models emerged with patterned fabrics draped across their bodies—they were akin to carpet, but the styling and silhouette signalled that they prioritised resourcefulness: they were keeping themselves clothed in whatever presented itself to them. Moreover, the introduction of a dusty lilac and a bottle green evoked a sensitive, subtle, soft repose to the beginning of the collection which was dominated by darker colours.

The show concluded with oversized puffer jackets that not only bore a message of protection but inborn saleability. For all his poetic mastery, Green has to build a sustainable business. Although you have the costume-y set pieces like the patterned fabric-clad boys at the beginning, you have the ensuing, impeccably tailored jackets and trousers. The emphasis on cut and quality of the fabric is second to none. It’s how he has become so successful in such a short span.

Green started out in January 2013 and in four years he won accolades including the British Fashion Awards for Emerging Menswear Designer (2014) and British Menswear Designer (2016), as well as the BFC/GQ Fashion Fund in 2016. A remarkable achievement for a young designer one could liken Green to womenswear’s Simone Rocha. He hasn’t yet reached Simone’s heights in his respective field, but the potential is more than evident—it’s a reality and when the time is right his business will thrive like hers.


Craig Green is one of the pull factors of London Fashion Week Men’s for sceptics who arrived solely for Tom Ford, Burberry and Coach. In fact, he’s been a pull factor since day one.
Posted by Paulidoodles at 6:00 AM