On May 1 the Metropolitan Museum of Art in New York City will host the Costume Insitute Gala—affectionately known as the Met Gala—to celebrate the launch of the latest exhibition, entitled ‘Rei Kawakubo/Comme des Garçons Art of the In-Between’. It is quite a remarkable achievement for Kawakubo, who becomes the second living designer to have an exhibition dedicated to their oeuvre.

‘The in-between’ is a perfect descriptor for Kawakubo’s four decade long career. Dissecting her body of work under terms of fashion/anti-fashion; design/not design; model/multiple; then/now; high/low; self/other; object/subject; clothes/not clothes. To rest on the last thematic opposition, clothes versus not clothes: in recent years, Kawakubo’s focus has been on designing gesturally, not so much with an emphasis on clothes. Her globular, amorphous and often incomprehensible ‘structures’, for lack of a suitable term, have divided opinion but also evoked emotional responses hitherto unseen at fashion shows—her response to loss and mourning left audience members weeping in their perches; her interpretation of enchanting witches produced one of her most beautiful collections in recent times; but humour couldn’t have escaped her Spring 2017 show, where she mocked the proportion-defying ethos of fashion designers today. 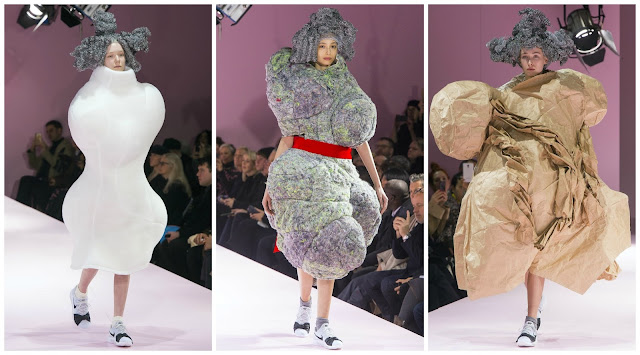 There are many interviews in which Kawakubo comments on her inability to articulate in terms of fashion. Believing she has exhausted all the possibilities, she created her own with this avant-garde answer to contemporary fashion and what it expects. Largely, it’s construed as a middle finger pointed to festering, tolerated mediocrity present within the industry. Of the 18 looks in this collection, not one resembled an identifiable item of clothing. They were shapes that bore no reflection of what has or is ever worn on the street—“the future of the silhouette”, a term thrown around backstage. They were exaggerated entities made from industrial textiles: white wadding, brown paper, matted insulation.

There were some pieces that had obvious connotations. The brown paper bag, perhaps a nod to her thinking the industry is trash, or also pointing to recycling and the damaging effects of fast fashion. One has picked up on whispers that a fluffy, curvaceous object was highlighting the cultural fetishisation of marijuana, and the battles to legalise the substance. Perhaps it is overthinking things, perhaps it is doing our best to look intelligent and interpret things in intelligent-sounding ways. That in itself would be a fashion statement, commenting on the industry’s paranoia and elitist attitudes. Is it designing for the future or for a museum? Therein lies the question that the Met will propose and challenge its viewers to answer in the coming weeks.


To say Rei Kawakubo has had an indelible influence on the fashion industry would be such an unfair, unworthy understatement. One could ask any fashion student from around the globe who their biggest inspiration is and, most probably, the answer you will be met with is one of the most elusive, inspiring and talented creatives the industry has ever seen. 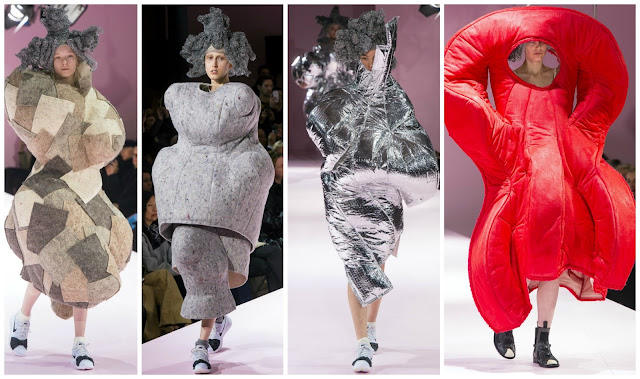