Thom Browne is an accomplished menswear and womenswear designer who operates slightly under the radar. He isn’t exactly a mainstream designer—his work is devilishly unique, rivetingly perverse. His unparalleled commentary, coupled with his razor-sharp attention to detail and tailoring contribute to him being a talented menswear designer. When you step foot in his Dover Street Market concession in London, you enter the world of Thom Browne: it’s a confined space, slightly claustrophobic, but mesmerising in the same respect.

His menswear show from January—he is one of the final shows during Paris Fashion Week, and thus the season—was perhaps the most Instagrammed show and most critically acclaimed throughout the month. Continuing on from his dissection and derision of the current state of fashion design last season, where Browne mocked the two-dimensionality of fashion, he explored another trend this season: proportion. With the rise of Vetements came new shapes, advanced versions of ones present in the 80s. The sharp, broad, quarterback-esqe was back—an ugly, almost militaristic trend, the wide-shoulder look was perhaps the most pervasive in recent fashion history. Dominating the Balenciaga menswear shows, Demna Gvasalia’s tenure signified a changing mood in fashion; there are new proportions, they are slightly obtrusive and ostensibly desirable. In response to that, Browne gave proportion and more… 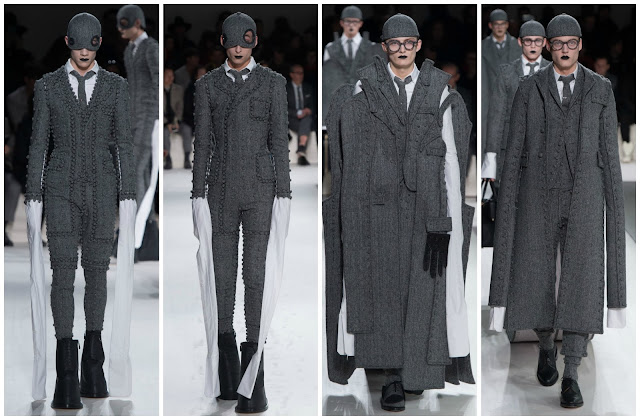 In a morbid, greyscale world devoid of colour, the boys wore variations of suit clung to the models’ bodies like paint. The seams were lined with buttons; like sinister eruptions bursting from the fabric. As the show progressed, so did the proportions. Distorting suits, Browne’s boys wore deconstructed two-dimensional outfits… Rei Kawakubo would be impressed. They questioned what could be considered fashion, and in this climate, we well know that anything goes.

That was the point of this collection, if you ask this critic. It was a mockery of what fashion has become. There is no register of what is considered good or bad anymore. Quality vastly diminishes as seasons pass by. It has also become incredibly boring. Writing, editing and rereading my own New York Fashion Week or Milan Fashion Week commentary alone can border worry—I become a broken record, lamenting the loss of creativity at fashion week more and more. Thom Browne’s greyscale show, the slow pace of his models, the mundanity of suiting as a thematic influence—it was an intellectual dream, a takedown of normcore, but intelligently becoming and manipulating the very thing it mocks.

His mordant lucidity and sense of self as a designer is remarkable. He poses the question, “is fashion entertainment?”, and concurrently answers it, “yes” is the answer. The sardonic nuances and unabashed bleakness aren’t much different to that of the world we live.