Oftentimes you get the impression from collections that designers haven’t the greatest interest in treating women as women, rather mannequins on which their clothes will be seen. Moreover, one feels the clothes haven’t been thought out fully—where is this actually going to be worn? Even the more avant-garde clothing could pass for something you’d seen on the street rather than the superfluity that some designers apportion to their runways. Chitose Abe and Phoebe Philo are the opposite of this. The two designers—Abe from Japan; Philo from England—bring absolutely unique, singular visions to the fashion scene that act as a revitalisation to the stale state of much of womenswear today.

Abe’s label Sacai was founded in 1998. It is a rare example of an incredibly successful independently managed business (to name but a few, Dries van Noten and Simone Rocha are others in the league). The benefits of independently run businesses are, simply, evidenced not only by the designer’s autonomy but by the clothes they create. There is a distinct aesthetic at Sacai—an unparalleled vision of hybridised outerwear with emphasis placed on fabric innovation. One can quickly identify a Sacai coat—of which there are many styles—on the front row during fashion week. Generally, there are wide shoulders—a cross-pollination between the menswear division—and faux fur accents to enrich the garment. Alternatively, there could be a print that looks familiar but in actuality is distorted and characteristically Sacai.

Distortion is a keyword when discussing a Sacai show. Abe subverts classic items with aplomb. Through manipulation of cut—i.e. her ambitious use of masculine tailoring—to her elongation of shape, there is strong feeling imparted upon the viewer that the designer has gone to the effort of attempting to present something new at a time when it is virtually impossible to do so. Her latest outing was bolstered by impressive daywear that skewered the glamorous 60s Parisienne, the futurist affinity of the residents of her native Japan and the embers of Americana. Abe spliced a shearling coat with a crisp puffer jacket—a chief example of innovation at the label. There was also the introduction of denim; a jacket was accented with an oversized fur lapel; meanwhile a skirt was slashed to allow a laser-cut silk skirt to pop out. Her intoxicating and often random mingling of fabrics point to her curious tendencies and experimental motivations. 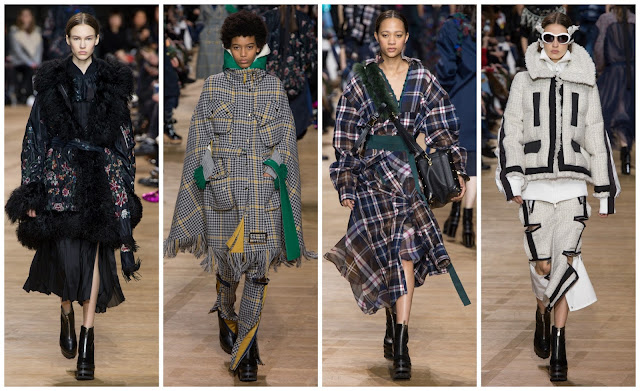 Similar to Abe, Phoebe Philo at Céline opts to construct an intellectual veneer around her clothing. Although it has been a while since her clothes have bore the same impact as they once did. Fall 2015 was peak-Céline—it was at its chicest, most refined and elegant. There was a period of confusion and uncertainty with Philo’s design but Fall 2017, to me, seemed like a confident return to form, a reminder why Céline became one of the most coveted fashion brands in the past decade.

There was a set—a surprise addition to proceedings. A turntable replete with international editors and buyers began to move as the music played at the beginning, a strange experience, surely. Critics wrote how the models must’ve walked past them more than three or four times. Why? There was no particular order to their walk. They stridently criss-crossed the wooden catwalk with attitude, in an effort to capture the hectic nature of women’s lives today. To combat this manic moment in time, Philo produced what she could to offer serenity and composure to women. There were sharp yet overlong blazers and cigarette trousers; wide-shouldered overcoats which were particularly contemporary; dresses were enhanced by their 40s flare and simplistic functionality; there were obscurely slashed trousers and a interesting interpretation of the shirtdress in cornflour blue. Liya Kebede emerged in a black coat with silk lapels and tapered trousers. She carried a green and black blanket, a printed apron wrapped around her waist—a delightfully styled, elegant ensemble.

Philo convincingly exceeds where she plays on the side of peculiarity. The aforementioned cornflour blue polo-shirt-cum-dress was a lesson in this mindset. Similarly the cut of a floral and geometric printed dress, with a seam running down the centre, created a oddly appealing optical illusion. There was a visually appetising shirt-dress in black leather with roomy sleeves. Personal favourites included the formless khaki jacket and a tank top with overlong shirtsleeves attached to it, presented on the delicate frame of top model Binx Walton.

When we hear the term ‘modern woman’—which many find odious—we usually identify its most learned professor in the realm of fashion as Phoebe Philo. Her propositions are generally excited and unconventional but totally wearable. There’s a level of fascination and often intelligence that is attached to her designs. It isn’t a wonder she is credited with starting the minimalist movement and is now the leading force in subverting that movement with grace and elegance.


‘Understanding’ is a word that is thrown around lightly. When one says Chitose Abe or Phoebe Philo understands the woman of today and how to make her life easier with fashionable and functional clothing options, one means it. These women are matchless characters without whom the fashion industry would be left without even more definition and direction than it already lacks. Like the women they wish to portray, their clothes are complex, expressive and elegant. 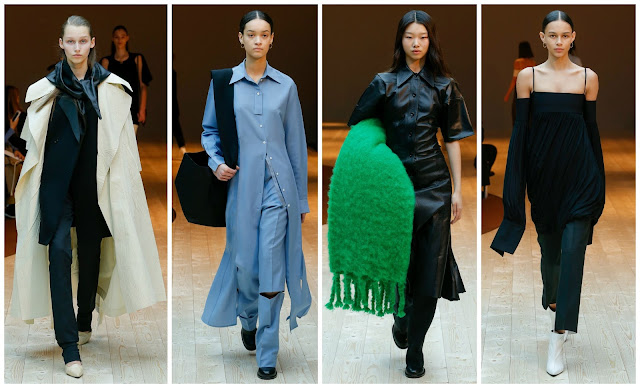