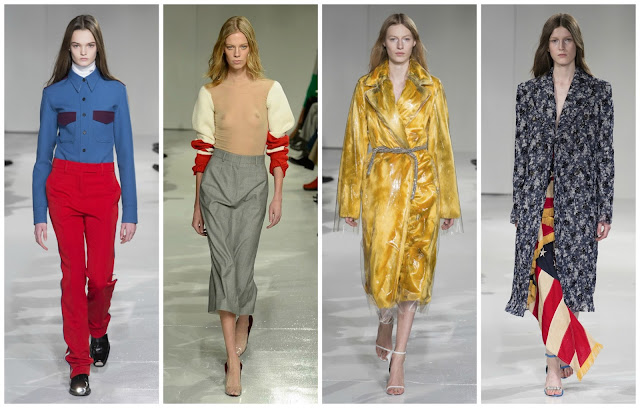 I don’t know what you’d consider more political: two immigrants designing at the most prolific American fashion house in these times or David Bowie’s ‘This is Not America’ playing in the show’s denouement at Raf Simons and Pieter Mulier’s debut at Calvin Klein Collection. In Trump’s America there are threats to immigration; protectionism is rife—Trump wants American jobs to go to Americans. Cue Simons and his partner-in-design Mulier to effectively pose a counterpoint to the nationalism that we lay witness to nowadays.

At his Fall 2017 menswear show, displayed last week during New York Fashion Week: Men’s, I highlighted Simons’ obsession with American culture. For him to be positioned at an esteemed American brand it was obvious that he wouldn’t be disembowelling it and rebranding it: he’d be elevating it, celebrating and lavishing in the opportunity. His so-called “homage to America” began with the venue—the Calvin Klein headquarters. A Sterling Ruby installation—about America—hung overhead. (His front row—much was made of it—featured a lineup of famous faces, including Lauren Hutton, Brooke Shields, Julianne Moore, Gwyneth Paltrow, Millie Bobby Brown. It was an amalgam of those who have had a working relationship with the brand over the years.) The pressing question that has been in my mind since the announcement last August was: what would it look like?

As I mentioned previously, there would be no disembowelment of Calvin’s codes, only elevation. And so he presented us with that. A colour-blocked ensemble consisting of bold crimson trousers, a colour-blocked utility shirt in blue with burgundy  breast-pockets and a white turtleneck opened the show, with square-toed boots (reimagined cowboy boots). The Americana references came in droves. Simons and Mulier wanted to capture “the future, the past, Art Deco, the city, the American West, all of these things and none of these things. Not one era, not one thing, not one look.”  A complex statement—typical of a press release—but an apt one. Men and women were dressed in identical workwear-inspired clothing to evoke the idea of a uniform. The city slicker wore sharp double-breasted suiting and cowboy boots. Sleeves were given the varsity sweater treatment. The denim was reminiscent of Brooke Shield’s iconic campaign imagery from the 90s—a monumental moment for American fashion. 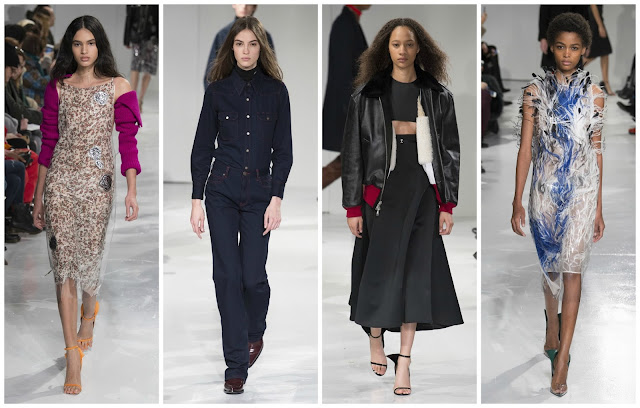 The reference pool was most blatant when an American flag skirt took to the runway. It was excellently tailored, fringed with gold—surely, attempting to make America great again. The ensuing coat was embellished with fine jewels, evoking the image of the fifty stars present on the star-spangled banner. The covert references however were with the plastic sheeting that covered many of the outfits. A canary-yellow fur coat wrapped in plastic? Delicate feathers wrapped in plastic? Partly fetishistic, partly uneasy—indicative of the unease, the slippery-to-the-touch reality of America, from food to culture.

To this critic, much of this was if Simons was reinterpreting his own archive. There was the colour-blocking joy of Jil Sander; the swishy femininity and couture-like sensibilities from his Dior days; the raw and real masculinity of Raf Simons, his eponymous menswear label. But there was Calvin too—90s Calvin, when the namesake designer was still creating for the house; whiffs of Francisco Costa, his predecessor, and his favouring of clean lines and slightly stiff outerwear were also evident.

“It’s the unique beauty and emotion of America”, albeit told through the eyes of the outsiders. Everything always looks and appears better when it’s told from the perspective of the outsider. It removes the grubbiness, the actuality, which we’re all beginning to come to terms with, is that it’s nothing something great or wonderful, but it has to be conserved. This moment doesn’t redefine American fashion but it does invigorate it at a time when it needs it most. Simons and Mulier are off to a remarkable start.

Vogue Runway
Posted by Paulidoodles at 8:00 AM