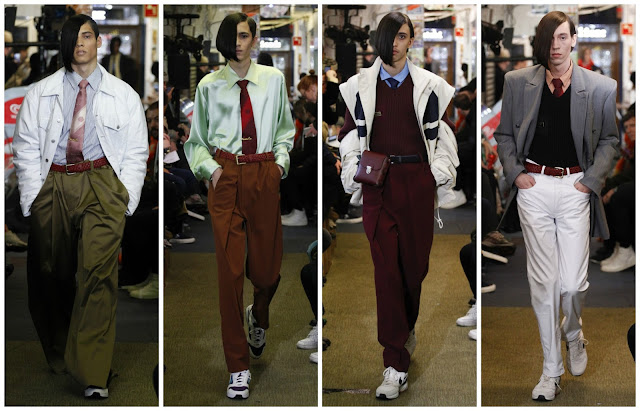 Martine Rose can be listed along with a few other menswear labels operating today, including Cottweiler, Raf Simons, Gosha Rubchinskiy, as a cult designer. Few have managed to achieve this status but those who have prove it’s possible to build a distinct universe around your oeuvre and amass a staunch following who will lineup for product drops and do anything to become part of the world. Why is Martine’s name broadcast less than her male counterparts? Probably because she has opted out of the official menswear schedule since her Spring 2013 collection, which was four and a half years ago. Her alternative was issuing lookbooks, collaborating with visionary filmmakers on shorts. Despite her absence from the mainstream her riveting explorations of sexuality and masculinity were not lost.

Martine returned to the London Fashion Week Men’s schedule triumphantly with a delightful Fall 2017 presentation. Staging a show in N15, in the thick of North London, away from the nucleus of fashion week in Covent Garden, takes chutzpah. The Seven Sisters Indoor Market was given a rude awakening around 8pm last night when the fashion pack arrived. Venue is everything in fashion. Whether it’s Blenheim Palace in Oxfordshire, the Musée Rodin in Paris, the Dongdaemun Design Plaza in Seoul—designers are constantly outdoing themselves with location, location, location. Their was a humbleness to Martine’s setting, and it also pointed to something else within the collection. 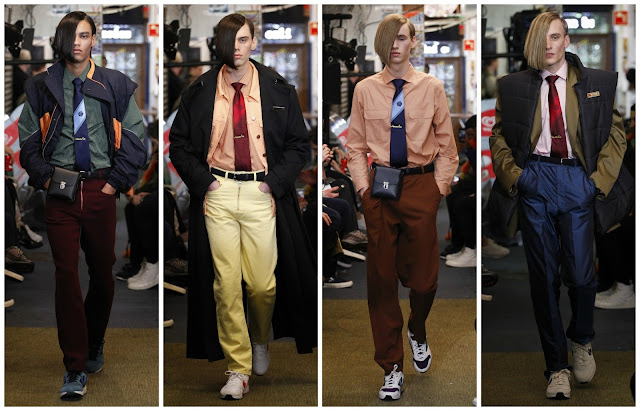 North London is sheltered from the glitz and glam of central London. In this show, Martine dissected common characters: bus drivers, office workers, investment bankers, American Psycho was brought up by Martine. It explained the glamorous nature the collection had; those silk trousers and printed ties; wide-shouldered, impeccably tailored blazers (Martine consulted for the Spring 2017 Balenciaga menswear collection, hence the cross-pollination between this and Demna’s debut); the fetish-y leather trousers and popping colour on the windbreakers.There was still a sense of the quotidian: these are the men you see on your morning commute—not exclusively in London.

Fashion continually fetishises working class culture, despite the fact it often draws ire and raised eyebrows. There is something off about appropriating the codes of streetwear of the working class, when an entire outfit costs between £50-100, and charging hundreds of pounds for individual pieces. Gosha Rubchinskiy is instantly recognisable as a purveyor of working class appropriating; he’s joined by Martine’s fellow London-based creatives Caitlin Price, Christopher Shannon, Richard Malone.


This interpretation of working class fashion is an economic reflection also. In difficult economic times minimalism proliferated—see, the rise of Phoebe Philo’s inimitable effect on fashion at Céline, where the minimalist movement kickstarted; customers weren’t flashy about their wealth, in fact it was the opposite: they were concealing it. The working class ‘moment’ in fashion is defined by a similar desire: people are wanting to fit in with the economic times. However, there’s a wit to what designers like Martine Rose—it’s crucial to her success.