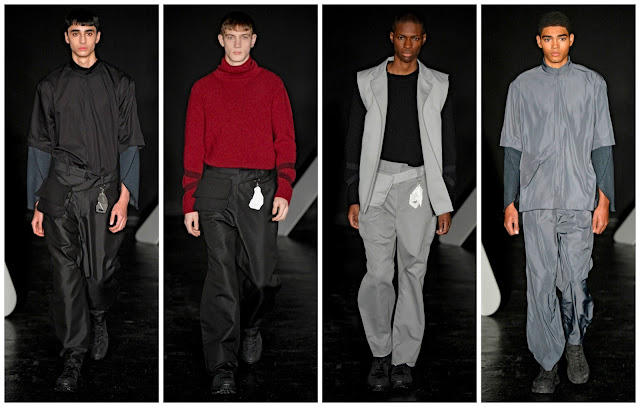 “Cutting is what excites me,” says Bulgarian-born designer Kiko Kostadinov, in an interview with Dazed. “But not as in pattern cutting, as in experimenting. When I talk about cutting, it’s not like I’m a fucking Savile Row tailor. Cutting, proportion and silhouettes excite me.” Few a designer can express a similar sentiment. Kostadinov is fresh off the success of his sophomore menswear show, presented at the BFC Presentation Space at the Store Studios, a few weeks ago. Having only been around for a year—he was part of the Central Saint Martins MA show during London Fashion Week, before launching his eponymous label at menswear week that June—he already has collaborations with Stüssy under his belt, the assistance of Dover Street Market and enraptures audiences with his dystopian-lensed clothing. Contrary to many designers, he isn’t solely motivated by aesthetics.

“Consumers should be much more critical and not distracted by social media ‘campaigns’,” I appreciate this statement, especially as a writer who has never abandoned journalistic integrity for social media likes. “They should be able to make their own mind up and choose clothes with real beauty or substance,” he continues. There will be brands, and bloggers, who rise to the top without merit, but that’s fashion: it’s not a meritocracy. However, there will be those who will support your work nonetheless. In Kostadinov’s case he has the support of publications such as Dazed and i-D, as well as countless other independent projects whose willingness to promote is endearing. 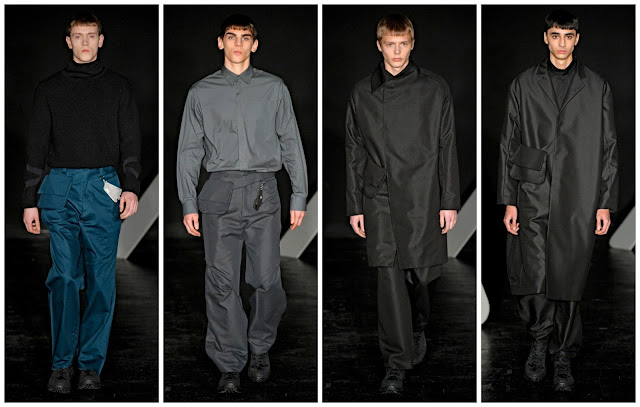 “I hate decoration, I hate it so much.” This statement is echoed in his clothing, which is, obviously, unfussy and refined but yielding the poetic symbolism of uniforms and homogeneity. It is also another declaration that feeds into his thought process. Oftentimes designers are preoccupied with achieving the social media moment that will be projected across Instagram and be enjoyed for 0.5 seconds. By placing an emphasis on textiles and silhouettes, Kostadinov separates himself from the crowd and essentially forms a niche of his own—not only with his clothes—but not getting caught up with the world of social media, where everything lives fast and dies quickly.

Despite his aversion to social media antics, Kostadinov enlisted set designer Thomas Petherick. (He’s also created sets for Faustine Steinmetz, Ashish, amongst others.) Three geometric objects were positioned in the room. The collection itself was comprised of 16 looks and they were an “exploration of a modern uniform and its relationship to class”. Scrubs, miner’s outfits, postmen and decorators—you likely know one of them. Kostadinov enlivened society’s signature utilitarian uniforms with double faced twills paired with the fabric’s reverse side; Scottish knitwear with intarsia sleeve details; Italian nylon and Japanese jersey. They are jobs generally assumed by the middle class; the homemade bowl cuts the models sported were also a meditation on class--an anonymous haircut but rooted in class divisions.

I’m intrigued whenever designers muse on mundanity. On the one hand it makes their garments more marketable, on the other it might seem pointless if it’s so easy for the high street to imitate. (Then again designers have the opportunity to expand their dialogue with fabrication.) It was similar to when Molly Goddard, in the earlier seasons, and Phoebe English, before her menswear took flight—tapping into naturalistic, bleak imagery to convey a darker message. London designers are skilled at that. Kostadinov’s development will be interesting to watch.

WWD.com
Posted by Paulidoodles at 6:00 AM