Jonathan Anderson’s work is often dubbed “lofty” and “difficult”—take it from this critic: oftentimes it is. As of late, the Northern Irish designer has been lending a softer sensibility to his collections at his eponymous label. This newfound gentleness derives from his other vocation as creative director of Spanish luxury goods house Loewe, where he has reinvented the meaning of luxury. His Spring 2017 womenswear collection was heavily influenced by the party island of Ibiza, hedonism, dancing around the beach campfire at midnight on MDMA. When each look took to the runway in his usual show space, with confined corridors promoting the idea of confrontation, it was clear Anderson was still in a Spanish state of mind—but when the holidayer returned to wintery Britain.

Sunburst orange, ink blue, punchy purple, sea-foam green juxtaposed nicely with cool camel, earthy brown, dark greys. The sunny Spain versus the inclement England. Light polo-shirts printed with medieval imagery were layered with button down shirts with striped sleeves—sophistication subverted. There were thick-knit wool jumpers which teetered on the lines between the subtlety and craft of Loewe and the perplex and perverse J.W. complexities—a riveting melange. 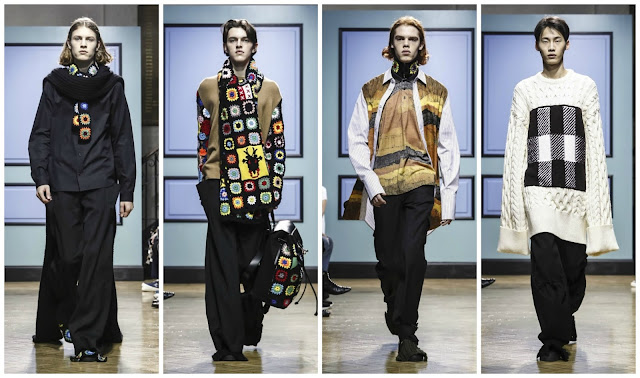 Anderson may well be offering softer, gentler clothes but he could never be a true softie. He opened the show with a black suit and billowy trousers, segueing into thick knits and glitzy trousers. A white shirt with a stained glass window motif bled into an acid-trip of colours, inspiring a darker yet carefree mood. Similarly, there was something off about the thick tangerine scarf and cardigan combination that lit up the middle of the collection. It’s otherness is characteristic of Anderson’s inclination to subvert classic items and transform them into something weirdly wonderful.

Clearly he is echoing a similar statement to Christopher Shannon who told Sarah Mower earlier in the day, ‘yeah, it’s sad but I didn’t want it to be miserable.” While the dreary weather outside instigates seasonal affective disorder and a glum mood, you had the flowery crochet patches, the shirts printed with scenic images, chaps with stained glass paintings. There was an ebullience afforded to the collection, the memories of Spain still in mind.

There were no groundbreaking political commentaries in the collection. He usually plays with notions of gender and expression of sexuality but here that was practically nonexistent, save for the more feminine blouses and lengthy jumpers. And while we commend Jonathan Anderson for being the provocateur he is—and there were some pieces that did push boundaries silhouette wise—this was a more commercially-inclined collection. When fashion broaches consumerism I generally have qualms with that but this collection was fabulously styled and edited, a story was told: the J.W. Anderson brand is developing and this will no doubt prescribe the direction of fashion for the next twelve months. 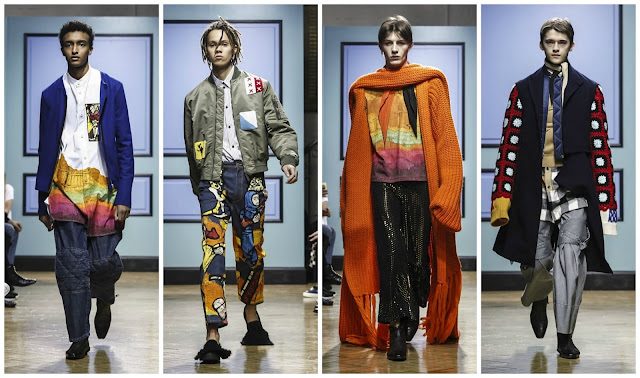 Photo Credit: showstudio.com
Posted by Paulidoodles at 6:00 AM