If there has been one thing unanimously anticipated by the fashion set for 2017 it is the designers’ response to Brexit, to Trump, to the big bad world around us. This time last year people were still focused on the migrant crisis in the Mediterranean, where boats were filled with hundreds of people fleeing to Europe in search of a better quality of life. In the ensuing months countries began to tighten borders, governments reacted harshly, newspapers churned ‘fake news’ detrimental to the migrants’ success at achieving greater prospects. As 2016 progressed, Trumpism, white supremacy, populism and fake news rose to power in America but designers didn’t exactly react accordingly—not yet, anyway. They were too preoccupied with ease and nonchalance so much so politics was in the rearview mirror—even in politically-motivated designers’ collections.

When London Fashion Week Men’s began on Friday morning one thing was for sure: the designers had some thoughts. Phoebe English presented her fourth Phoebe English Man presentation, at the BFC Presentation Space at Store Studios (formerly 180 The Strand), the BFC’s new headquarters and fashion week’s—men’s and women’s—new hub.

(The change from London Collections: Men to London Fashion Week Men’s is part of the BFC’s effort to streamline and remodel London fashion weeks. They will no longer be “Fall” and “Spring” but “February” and “September”, or “January” and “June” in the case of menswear.)

“It ends up being an investigation into what guys are wearing at the time,” English told Vogue Runway’s Nick Remsen at the presentation. She explained her design process: her male friends visit her studio and they allow their thoughts and ideas to percolate. It is a creative set English aligns herself with, no doubt.

She was one of the few designers to face off with Brexit head on in her exquisite Spring 2017 womenswear collection in September. She based her work on the week leading up to and after the UK EU referendum vote and the uncertainty, the queasiness, the slimy political characters we have to put up with today. Here she played the politico again. “We can’t be a like-and-share culture anymore. Passivity is a luxury we can no longer afford.” (It was that ignorance that allowed populist victories across the world in 2016.( It was ironic then that her models in their intimate presentation space were sweeping up the mess—the post-Brexit mess, obviously. With their vacuum cleaners, sweeping brush, their dust pans, they tended to the mess—the mess that was always going to be left for young people, young creatives.

How did the clothes reflect the theme? They were in dark colours, poetically Phoebe… There was a mournful mood instilled in the air. The first look was a navy coat in a sheeny fabric and Oliver Twist style turned-up trousers. There was relaxed joggers and a corduroy jacket in an ashen, charcoal hue—the ash collected from the burning Brexit blaze. The models were swaddled, comforted by the clothes which were in large proportions. Comfort is a luxury we can no longer appreciated, but Phoebe English afforded us that with her clothes. Post-Brexit poetry, 2.0. 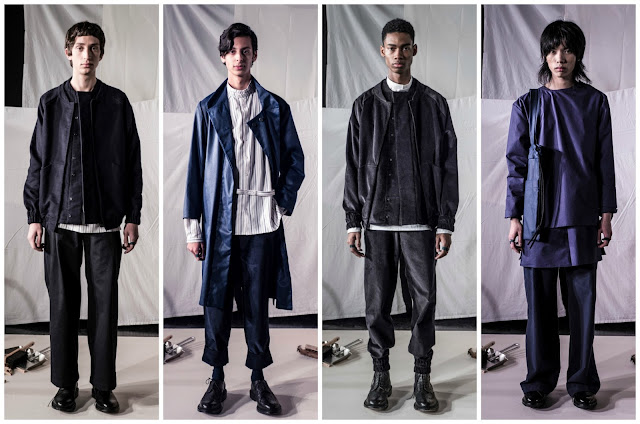 Charles Jeffrey showed his third and final collection as part of Lulu Kennedy’s Topman-funded initiative MAN—the menswear equivalent to Fashion East. I complained about the lack of refinement in Jeffrey’s first MAN collection. It was a remarkable debut and cemented his position as a Dalston-crazed party boy. I did witness, however, true potential in his work. His tailoring prowess was not to be dismissed. In fact, his Spring 2017 outing for MAN honed in on his technical skill. His army of models wore fabulously tailored corsets, trousers and jackets, embellished and embroidered to the umpteenth degree.

His true colours, maybe, were visible in his latest collection. He became a wise commentator on the world around us—and his too. There was his usual Dalston detour—Jeffrey is the founder of Loverboy, an illustrious club night that attracts the wildest of characters with their eclectic expressions of themselves as people. However, there was a sombre mood here. There wasn’t exactly the bright and buzzed character we lay witness to in his first two collections; there was a sullen mood. His signature double-breasted suits and revolutionary times tuxedos were complemented by the dim lighting in the Old Selfridge’s Hotel, the Topman Show Space.

He employed Gary Card, set designer to talented London designers, to fashion him papier-mâché monstrosities, of which there were a few. One resembled a mushroom cloud—with heated debates over the use of nuclear weaponry, it was an exhilarating and poignant rebuttal to the talks. Secondly, there was structure comprised of Union Jacks and Stars and Stripes—the UK and America, two superpowers experiencing turbulent times. This particular piece looked as if it was imploding…

Not only did Jeffrey make a case for the commercial viability of his brand (he is being mentored by the best of the best), his work took on a life of its own. From the energy of his clay dancers to the haunting nature of his papier-mâché creatures interfering with the clothes, it was a shame, they were his best yet. But I suppose, Jeffrey is a theatre man: this was his stage to vent. How Shakespearean. 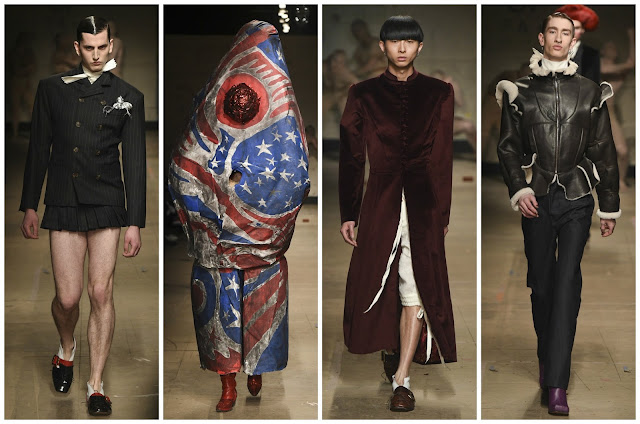 Liam Hodges is a designer who I count as a personal favourite because his clothes are comfortable, and while their daring in terms of my own personal style, they’re well-made and worth the price tag. He was another designer who, like English, was influenced by the post-Brexit, post-election blues. His reaction was more pointed: the collection was entitled, ‘Dystopia Lives’.

“Ideology is a myth” was a slogan that appeared on two-toned puffer jackets and on the back of a bomber. There is no need to delve deep into the political backstory of this—the blatancy of Hodges’ statement speaks for itself. Just look at the United States, a prime of example of where ideology is a myth. Both candidates threw ideology out the window and transformed the political arena into the octagon. Verbal UFC fighting took place daily—politics, promises and plans didn’t count.

Hodges also pointed to censorship. Trump regularly spoke of “online censorship” on the campaign trail. His vitriol was often censored to hide the atrocity of his words, as was the horrific statements of right-wing conservatives who careered the Brexit boat. And now, Trump is attacking journalism and mainstream media for portraying him poorly, with threats and accusations. Hodges interpreted this with the Motion Picture Association of America banner that plays before every popular movie trailer. His read PG-13, perhaps to symbolise the pettiness of everything nowadays.

Away from the witty sloganeering, Hodges used durable, sturdy fabrics and interesting colour methodologies to capture the audience’s attention. He employed contrast within every piece. It jarred and it provoked but it was brilliant. The bright green MPAA banner against an acidic yellow, black brushstrokes on lemon, white and black panels on camouflage jackets. It being a Fall 2017 collection, it was appropriate for the models to be wrapped up.


Winter is coming, in more ways than one—we’d best be prepared. 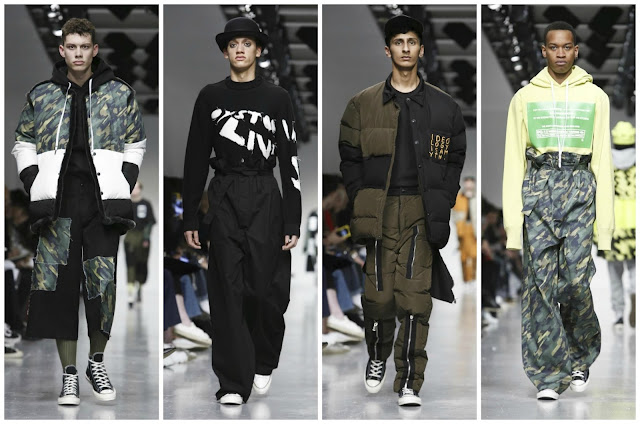