With fashion’s goldfish attention span you mightn’t remember the musical chairs that punctuated every other month in 2016. The amount of designer departures, relocations at brands last year was truly shocking. In my seven years of following fashion I have never seen such upheaval. (Here’s hoping it doesn’t wreak more havoc in 2017.)

Milan Fashion Week commenced on Friday evening. It’s a strange time for men’s fashion weeks with the consolidation of women’s and men’s collections, the new schedules designers themselves are inventing. Five tentpole shows of the week are opting out this season. Alessandro Michele’s awe-spiring Gucci iteration—recharged Milan menswear in January 2015—is opting to show its women’s and men’s together at womenswear week in February. Ditto Bottega Veneta, who will follow suit. Brioni and Roberto Cavalli are currently without creative directors—Justin O’Shea famously lasted 6 months at the brand; Peter Dundas was at Cavalli for a year and a half—and will not present as a result. Rodolfo Paglialunga’s will not present a menswear collection for Jil Sander this season. 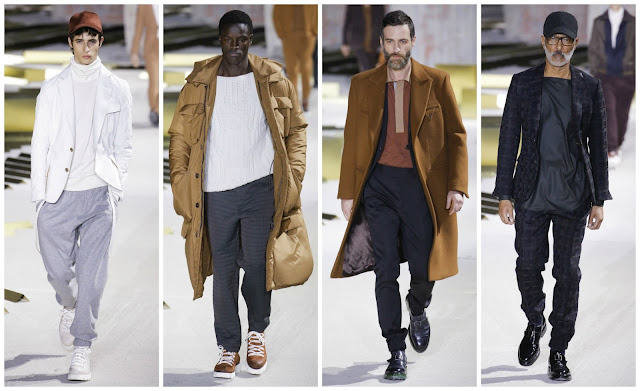 Alessandro Sartori made his debut at Ermenegildo Zegna on Friday evening. Formerly, Sartori was the successful creative director of Berluti. It was a bittersweet homecoming for Sartori who rose to prominence as Z Zegna’s creative director in 2003, where he stayed for 7 years when he was appointed as artistic director at Berluti. Zegna’s magnetic pull was felt when it was announced last February that he would be rejoining the Ermenegildo Zegna Group in June 2016.

His Fall 2017 at the house was presented in the Pirelli Hangar Bicocca, which is on the outskirts of Milan. It is an immense venue, a non-profit institution that devotes itself to contemporary art. Currently it’s home to Anselm Kiefer’s The Seven Heavenly Palaces, which is comprised of seven gargantuan structures that the models had to weave around. This wasn’t just a vast show space for the Zegna group to show they are one of the wealthiest in fashion, Sartori commented on the parallels between the pieces and his collection. “The Seven Heavenly Palaces of Anselm Kiefer are realise with pure materials but [the] aesthetic is super sophisticated and this perfectly marries the concept that we have developed in the collection.” Zegna prides itself on the control of the garment from the raw material to the finished product. Creating fabrics from natural resources, this couture-like methodology was highlighted by the previous creative director.

In the run up to the show Zegna’s official Instagram were posting informative videos which cemented the belief that the brand is at the fore of menswear in terms of quality and craft. Under Sartori, an emphasis is placed upon “the purity of craft [meeting] the modernity of the design. Starting from the basics and making it grand.” The collection wasn’t a snooze-fest filed with suit after suit after suit. It paired sharp blazers with wool trousers; boiled wool suits with simple t-shirts; hoodies with practical trousers. Sartori took the basics such as the turtleneck, the hoodie, the jogger pant and elevated them. Also, ‘basics’ to the Zegna customer is a blazer and trousers. He enhanced them to by using innovative fabric techniques. Utilising modern technology, the created new fabrics and worked with existing ones in innovative ways.

Whereas Stefano Pilati’s Zegna iteration was an ode to old-world luxury, with the spirit of a grand couturier, fit for gilded ballrooms, it was rooted in the past. Here, Sartori will capture the attention of a younger customer, while also retaining the loyalty of an older customer—this was reflected in the age-positive casting, which featured men of all ages.

Contemporary masculinity will be an interesting obstacle for Sartori. He’ll have to tackle it eventually with the fast-paced, ever-evolving world around us, but until he moves in that direction we’ll just have to appreciate the great clothes. 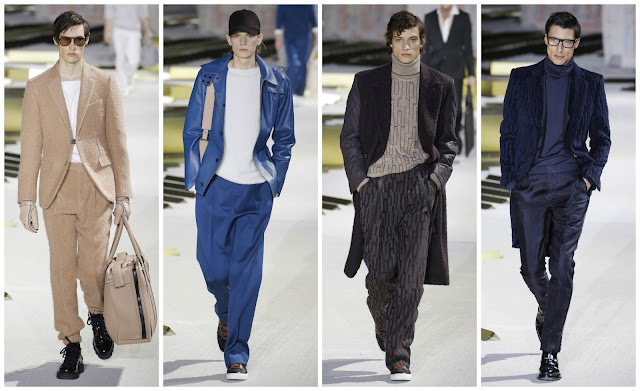 Great clothes, although trite to say, underscored the debuts at Milan Fashion Week this weekend. Francesco Risso joins Marni from Prada, where he formerly worked as designer working on the “womenswear collection and on special brand endorsements.” Former creative director, and her family, Consuelo Castiglioni left the brand in October last year. It was a personal decision—the company was owned and run by the Castiglioni family. She was a pioneer intellectual fashion; her clothes were always rooted in a tricky, quirky, oftentimes lofty dimension, that required precise decoding. Although a quiet designer, Castiglioni’s presence strongly resonated with fashion journalists and buyers alike. It was sad to see her go.

Her replacement, Risso, made a fine attempt at hot-wiring the brands codes and driving it forward into the future on Saturday afternoon. Castiglioni’s Marni menswear was all about intellectualising fashion, subverting the tropes and turning them into something kooky but desirable. Risso identifies the Marni strengths and simplifies them for a new, younger customer. It seems every brand is dissatisfied with its customer base nowadays and is trying to be everything to everyone which, if you ask this critic, is sacrificing creative integrity. At a brand like Marni, dumbing things down could prove detrimental.

“What really interests me is the diversity of the people in the street,” Risso said to WWD, backstage, pre-show. I presume Risso is talking about characters because this wasn’t exactly reflected in the casting, with minimal representation—a better effort than most, might I add. These characters included a man wearing a burgundy suit; a blue and burgundy fur hat; patchwork fur jackets; shaggy sheepskin coats; fur-accented hoodies and tight-fit winter jackets. (There was variety here, something for everyone, as with Zegna the evening previous.) It was all staged within the usual Marni venue, where an optical illusion was projected onto a wall, the flooring was divided geometrically—the Marni street.


The show was a nice repose to the drab and gaudy Dolce & Gabbana runway-cum-‘the worst of millennials’-bash. There was a vibrancy to the collection but Risso’s former outpost, at Prada, was notable. There were whiffs of his former employer in the show. The way a wide-shouldered jacket was belted at the waist with a thick leather belt—or a geometric-print jacket with feather adornments—instantly invoked images of Prada. There’s nothing abhorrent in that—those pieces were remarkable—but this is a different house and I’d like to see Risso reinterpret his own design handwriting in a less deliberate fashion. 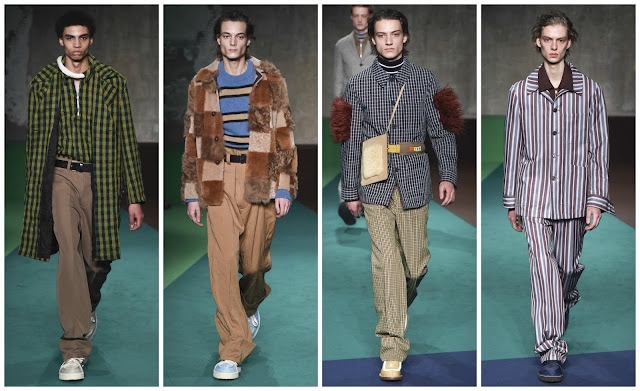 Guillaume Meilland’s opening chapter proved to be a seamless succession from Massimiliano Giornetti’s tenure. Meilland’s history goes back thirteen years when he was junior menswear designer at PHM Saint Pères before assuming menswear designer positions at Cacharel and Yves Saint Lauren; most recently he served alongside Lucas Ossendrijver in the menswear ranks at Lanvin. Like the new womenswear counterpart at Salvatore Ferragamo—Fulvio Rigoni—Meilland is a relatively unknown designer.

His Salvatore Ferragamo man isn’t much different from the last season’s one: he’s polished, his clothes are finely tailored; there’s a practicality to everything—fuss and eccentricity are words that won’t be found in his dictionary. It being Milan Fashion Week, visions of early-00s masculinity are stringently adhered to. The wildest things got here was an ice white leather jacket. The light grey cropped blazer was another surprising additional to the menswear arsenal. It looked odd, but in a good way.

It was tame affair but it will no doubt resonate with the Ferragamo customer. While I disliked its meaninglessness, I have to admit I would love to own many of the pieces shown on the runway. In the absence of Gucci and Jil Sander, there has been a noted loss of intellect among the clothes—save for Donatella Versace and Jeremy Scott’s fabulous shows on Saturday evening; Mrs Prada’s yesterday. That seems to be the recurring theme amongst most designers this season (and every season in Milan): clothes that don’t mean anything but look great. At least they look good because for a while there, they couldn’t even check that box. 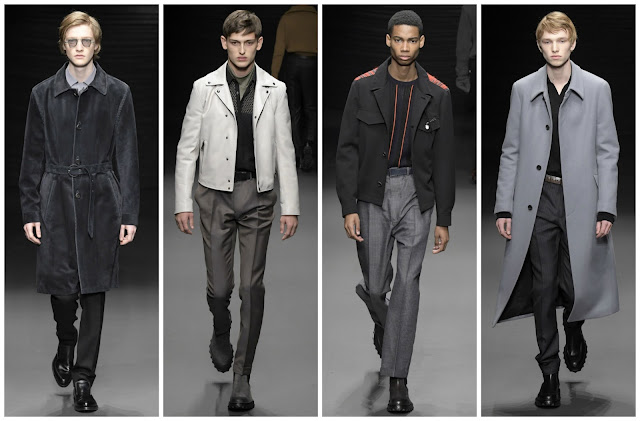