Yesterday morning, Demna Gvasalia was one of the opening acts of Paris Fashion Week. His second menswear collection for Balenciaga picked up where his last left off: reinterpreting classic codes of suiting and tailoring. The inspiration for his latest show was derived from the new Balenciaga and Kering headquarters in Paris; Gvasalia began to see the men who arrived at the office suited. He channeled their workwear here, in what the show notes describes as “a reading of contemporary reality, spanning the formal and casual, aimed at the breadth of an intergenerational audience.”

Intergenerational fashion is an interesting area that designers—especially the heavyweight labels—are investing research and development. You saw it recently with the arrival of Maria Grazia Chiuri at Christian Dior, sending t-shirts with ‘We Should All Be Feminists’, ‘Dio(r)evolution’, down the runway; there was a pointed political statement but the t-shirt symbolises accessibility to the generation of young women who will want to buy into the Dior universe down the line. Alessandro Michele’s Gucci is also championing this facet of fashion with the generation-less design ethos. (Notably, these are all Kering brands.)

How did Gvasalia incorporate this? He had the suits, with proportion pushing wide-shoulders and government official-worthy overcoats, but he juxtaposed this with skinny jeans, the velvet tracksuit trousers, innovative shirt-cum-hoodies, sweatshirts (one was even printed with the Kering logo—interesting marketing.) Lotta Volkova created a young man entering a big corporation with her A* styling. Although presented on an army of young men, older men could just as easily swoop in and pluck items from the collection off the rack. 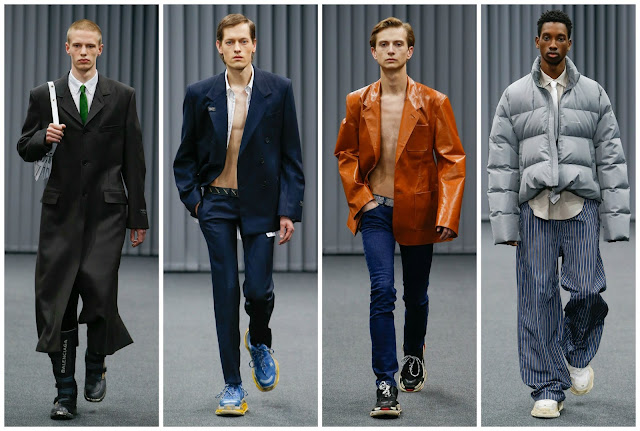 Gvasalia has long had a running commentary on consumer culture. One model in this show, wearing a red pinstripe suit with overlong trousers, carried Balenciaga shopping bags. Ditto another in a deep blue, wide-shouldered, double-breasted tuxedo. It is ironic that someone like Gvasalia, a fashion designer, would use consumer culture as a recurring motif when his brand is one of the most sought after in the industry, one that generates millions in profit every year—all because of consumer culture.

Bernie Sanders—a man aware, and opposed to, consumerism—made an unexpected appearance in the show. No, 75-year-old man who ran against Hillary Clinton in the election didn’t walk in the show. His campaign logo was appropriated by the Balenciaga logo and appeared on red and blue hoodies and an oversized scarf, draped across the shoulders of the closing model. It was a witty ode to the year that passed—perhaps an indication also that Gvasalia is steel feeling the Bern? The socialist symbols are all the more relevant in the current political climate. Could Bernie Sanders have defeated Donald J Trump in the U.S. presidential election? We will never know. Socialism vs populism will be a reappearing motif of 2017’s political discourse. In Gvasalia’s adopted home of France, far-right candidate Marine Le Pen is vying for presidency. Will socialism prevail in the face of fascism? The future holds the answer.


Gvasalia has great ideas. He has opinions on consumer culture, commercialism; he interacts with youth culture and fetish in his collections, which proves for thought-provoking material. I especially admire this newly-awakened politico in him, but I do wish the clothes matched the ideas—right now, they’re falling flat, even if mundanity is the aim. 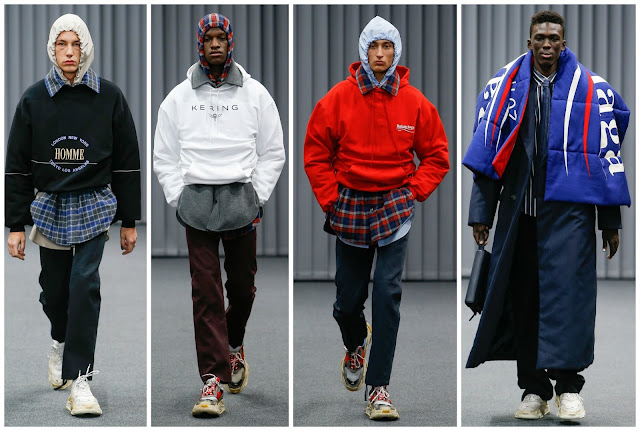