Fernanda Ly and her bubblegum-pink tresses; Amandla Stenberg, educator, actress, activist; the gaze of Zoe Kravitz, stepping into the limelight; musicians making their own music and rules, Grimes, Willow Smith; ‘boys of summer’ Cameron Dallas and Anwar Hadid; virtuosic Olympic gymnasts, Simone Biles and Gabby Douglas; fashion blogger-cum-actress with a legion of impassioned teenage girls behind her, Tavi Gevinson; politically-engaged Chloë Grace Moretz; generation-redefining prowess of Rowan Blanchard and Yara Shahidi. Those were the faces a generation of adolescents were faced with when they visited their local newsagents this year. The faces before them were inhabiting the inspiring, important vision of Teen Vogue’s editor-in-chief Elaine Welteroth.

Forget everything you thought about Teen Vogue, hitherto… well, most of it.

Under the guidance of Elaine Welteroth, who replaced Amy Astley in May, when Astley joined Architectural Digest, Teen Vogue has been continuing in the direction Astley set forth for it in the final months as editor-in-chief at the magazine. Throughout the years Teen Vogue has notably featured the likes of Selena Gomez, Vanessa Hudgens, Zac Posen, Hayden Panettiere and a bevy of other celebrities who represent a particular era of celebrity culture—they are the preened Disney and Disney-lite stars in the world who occupied the minds of adolescents for many years. In its infancy, the magazine was the cutesy little sister to the polished Vogue. Now, approaching it’s 14th year in publication, Teen Vogue stands for so much more than the young Hollywood starlets and heartthrobs that fill its pages.

The first indication that Teen Vogue was changing for the better was in August 2015 when three unknown models (at least to the masses) were placed on the front cover. Lineisy Montero, Imaan Hammam and Aya Jones, three young women-of-colour on the pages of a magazine that had previously, sadly, been mostly whitewashed. A gamble it was to put relatively unknown faces on the cover of the magazine, but the issue ended up being the bestselling issue of 2015.

As each month came by and the cover for each issue was revealed, one couldn’t help but feel excitement at the cover choices. Not only do they appeal to the readers, but for the most part each of them embody something important about today whether it be their feminism, sexuality, activism, or use of social media.

Teen Vogue doesn’t demean its audiences either; it doesn’t belittle or speak down to teenagers. It appreciates them for the intelligent, knowing and politically-engaged people they are but also it addresses their other interest which include celebrity culture, makeup and fashion; it doesn’t label its audience ‘postmillennials’ or another horrid excuse for a word. There is a level of appreciation and trust between Teen Vogue and its readership. On December 14, if you were to take a look at the day’s headlines in the mid-afternoon you would be met with the following: “Why We Should Be Talking More About the Victims of the Charleston Church Shooting”, “National Parks May Be Under Danger Under Trump Presidency”, “This Will Be the BIGGEST Fashion Trend of 2017”, “Drug Use Has Actually DECLINED Since More States Legalised Marijuana” and “Kendall Jenner’s New Vogue Shoot Features Her Rumoured Boyfriend.” A rounded mixture of content grabbing your attention.

Last weekend the magazine made mainstream news headlines when an article about the President-elect Donald Trump went viral. Written by weekend editor, Lauren Duca, the piece is a scathing takedown of Trumpism—the piece is entitled “Donald Trump is Gaslighting America.” In the article, she addresses Trumpism in the post-truth world, how he threatens America’s freedom and the president-elect’s tendency to lie through his teeth. The response was astounding. There was of course a barrage of hateful comments at Duca’s door—it should be noted: she should be applauded for her fearless act. There were also the ignorant comments from the Alt-Right asking Teen Vogue to return to talking about manicures and boy problems. 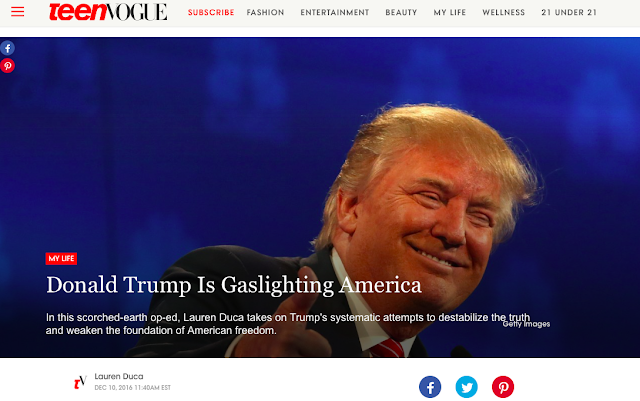 The ironic thing is: the magazine has never just been about ‘manicures and boy problems.’ Yes, the magazine can be quite facile and indulge itself in things that don’t necessarily better the lives of teenagers or enrich them in anyway. But, Teen Vogue has always published riveting think pieces in every issues. Subjects tackled range from sexual health to eating disorders to transgender stories to anxiety, depression and self-harm. The wide range of topics affecting teenagers daily lives have all be explored by the magazine and their acute writers.

Those writers will continue to bless Teen Vogue with their knowledge, acerbic wit, appreciation for dismantling the patriarchy and which nail polish shade goes best with a green dress. It was announced recently that the magazine will be scaling back its print issues, from ten to four issue per year. The objective is to make them more like a collectible for teenagers, seeing as we are consumed by our mobile phones.


Strengthening their digital presence is another intention of the magazine as we enter 2017. In the politically turbulent times of today it will be important to balance the weighty subjects of Trumpism in America with pieces about the new Spider-Man: Homecoming film and the facets of Kylie Jenner’s personal life. Teen Vogue has never been as relevant as it is now.
Posted by Paulidoodles at 6:00 AM