The general consensus about the Spring 2017 season is that is has been one about moods and feelings rather than concepts and intellect. In comparison, a mood is inferior to conceptual ideas. A designer whose interpenetrates fashion with disparate mediums and subtexts generally provides a distinctly layered experience, more invigorating than, say, a collection focused on “happiness”. However, sometimes something will feel good and look good and that’s that—it doesn’t require any further inquisition.

Roksanda Ilincic’s recent show fell into that category. The Serbian-born, London-based designer’s collection was a “song to summer”, a convincing ode to the languid months we all eagerly anticipate. It was the “freedom and laziness” of these months that captured Roksanda’s attention in the designing of the clothes. Those two terms formed the basis for a collection that was complete with loose, relaxed fabrics in subtle earthy tones.

“I was thinking about nature, pebbles, sunflowers,” the designer said in her show notes. She asserted, “The palette was more about lakes and mountains rather than the seaside.” Hues of rich rust, earthy brown, and warm sand dominated the collection. Brown is always a contentious colour—put the frivolity of that statement aside—in fashion shows. Usually it is avoided but here Roksanda diluted it, as if she was a artist using white paint. The sandy and golden colours contrasted nicely with sharper, bolder purples, reds and navies. They also exemplified her colour-blocking prowess. After all, in recent times she was praised for her colouration and affinity for abstract and geometric colour-blocking.

Abstract and modernist art has been engrained in Roksanda’s niche for quite some time. (In her earlier years there was flashiness, gaudiness but over time her aesthetic became more and more elegantly demure, which lends itself to art world referencing.) A peppering of Henri Matisse, French painter, was present in the show. Her husband, Gary Card provided a set which resembled the work of the renowned artist. Similarly, painterly brushstrokes on a dress worn by top model Mayowa Nicholas resembled the late artists work.


One gets the impression that the Roksanda woman belongs to an art community. If not art, then somewhere in the creative industries. Matisse references, her stylist, Venetia Scott’s discerning eye for colour, will bode well with that woman. These clothes will be available for her—stocking the shelves of Roksanda’s impressive Mount Street store, where moments later they’ll fly off the racks, going home with the lucky woman who will have a great piece in her wardrobe for years to come. 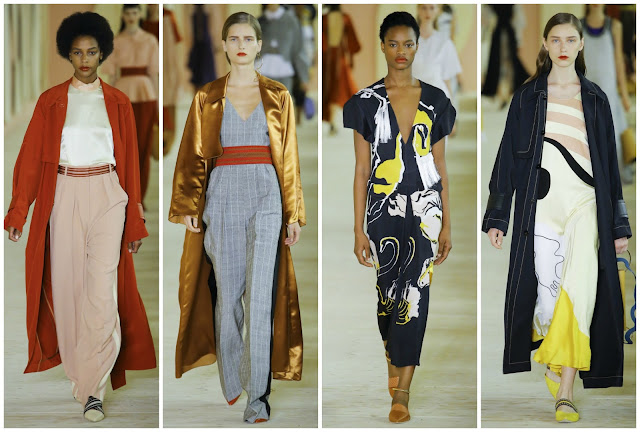