Julien Dossena is part of the new guard of French designers whose success skyrocketed in recent years. Alongside Vetements, Alexis Martial and Adrien Caillaudaud (who spent a year and a half as co-creative directors at Carven, Spring 2017 marked their last collection), Sebastien Meyer and Arnaud Vaillant (who shuttered their label Coperni Femme to take on the revival of Courrèges), Wanda Nylon, and Simon Porte Jacquemus. Dossena, like many of his contemporaries, has a wealth of experience. He worked at Balenciaga, alongside—his boyfriend Nicolas Ghesquière—as senior designer and promptly left along with Ghesquière in 2012. Accompanied by his friend, he founded Atto, a short-lived label, whose end came with another exciting opportunity for Dossena: the artistic director position at Paco Rabanne.

Commandeering the revival of a house whose recent iterations has seen designers come and go like the wind. It appears, although it’s only been a few moons, Dossena is the man for the job. He arrived in 2013 with the mission of refreshing a dormant fashion house—although it’s beauty division thrives. The fashion press has been warm, even expressed their pleasure in laudatory critiques. He has certainly reignited the flame of the French house. He has taken the founding designer’s staple—unconventional materials: metal, chiefly—and transformed them into something light and breezy and sporty, harnessing modern technology to innovate, develop.

His Spring 2017 collection was another light, sporty, if lofty, affair. It was a show replete with references to the namesake designer, to sports, 60s Space Age fashion, science fiction. There were NASA-worthy space suits, shimmering dresses, fine tailoring, sports garb fit for an intergalactic traveller on his or her expeditions.

The show also saw a collaboration with revered graphic designer, Peter Saville. The collection featured an extension on the capsule Dossena and Saville released earlier in the month. Selena Forrest opened the show wearing a race car driver’s flame retardant protective gear and a shimmering sheath fashion out of chandelier-worthy crystals. Her top read “Futuresex” which previously appeared in the collaboration. Was it a reference to progressive attitudes towards sexuality and gender? Perhaps, it could’ve been referencing the ever-expanding vocabulary of sexuality and gender? Or, maybe it was just a catchy slogan to slap onto a t-shirt? I’m on the fence.


Dossena presented 34 looks, with varying degrees of success—much of it fell flat. But that’s where nostalgia, Space Age fashion comes into play. While Space Age fashion and the brilliance of its founders André Courrèges, Mary Quant was innovative and thrilling in its, but it’s excitement has worn and Dossena is stuck in the past-future, and like his 34-looks, it’s with varying degrees of success. 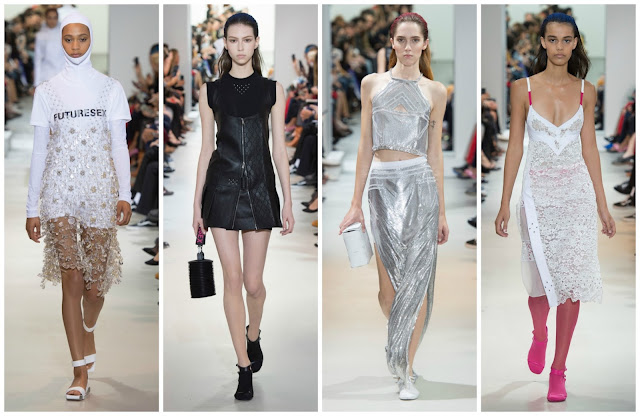