Sebastián Meyer and Arnaud Vaillant met at Mod’Art International Paris. Meyer graduated with extensive knowledge in design and sewing; Vaillant specialised in the business side of things. It is one of those dream pairings for fashion students, one that the industry should promote more often. They opened their own label Coperni Femme in 2013. It received high praise from the fashion press but it was shuttered when they were appointed co-artistic directors of Courrèges, a dormant fashion house. They joined the brand in 2015, presenting their first collection that October. In January, André Courrèges, the brand’s founder, passed away.

Courrèges famously manipulated modern technologies to develop to his futurist aesthetic. Meyer and Vaillant’s retro-futurism is punctuated by similar discoveries in technology. They proposed 3-D printed peplum tops, as seen in the show’s denouement. They were daring—in the context of this brand—to say the least. The boys fashioned a suit from neoprene, a material traditionally used in scuba diving suits. This reworking of classic brand ideals keeps the brand relevant. They didn’t however entertain the idea of a go-go boots in 2016. André Courrèges made them a staple wardrobe item in the 60s. They opted instead to use a modest sandal. Although a go-go boot would’ve enlivened some of these looks, not even technological advancements could convince me they’re “in fashion”.

There’s something about Courrèges that doesn’t gel. While technological experimentation is wonderful and designers, where possible, should invest in exploring the area, Meyer and Vaillant can’t seem to electrify this brand, one which electrified 60s fashion. The clothes sell like hot cakes, but why does the runway presentation strike one as cool and lofty. Perhaps its the pointedly commercial execution that fetishes consumerism. Yes, fashion shows are designed to sell clothing but the dream element that is essential to the fashion show is missing here.


Fernanda Ly, model of the moment, closed the show. She wore one of the aforementioned, skin-bearing 3-D printed peplum tops. With her bubblegum pink locks she almost looked out of place compared to the other models whose hair was either brown, blonde or black. The pink was a shocking contrast but weirdly defiant; the sheer top contrasting to the formality of the entire collection. A casting happenstance and exploration of technological possibility or the grounds for change? 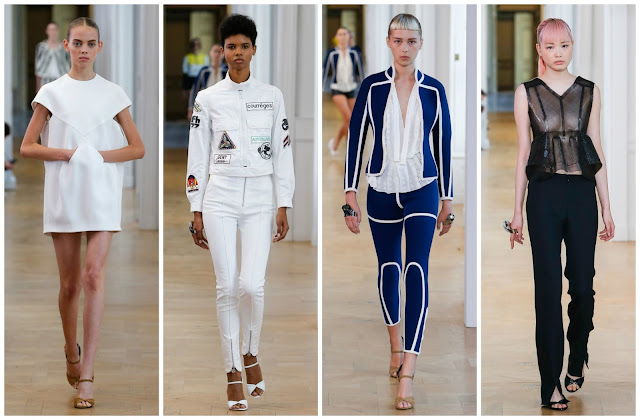