Gone are the days when fashion designers would trawl through monographs and picture books in search of inspiration. In the Digital Age everything is done in the online sphere. Some designers will resort to Google Images to construct their mood boards and, in turn, their moods for a given season. However, most designers are flocking to Instagram. You saw it recently with the duo at Marques’Almeida whose whole world is built on the existence of “trendy” girls who share their lives on the social networking app. Olivier Rousteing, creative director of Balmain, operates in a similar vein, except the characters he turns to aren’t the artsy twenty-year-olds of London—it’s the excessive glamour of Kim Kardashian West and her ilk. Rousteing too belongs to this school of thinking. He himself is a Instagram star, with 4.1 million followers.

The social media, one of the most prominent of them all, was the starting point for his Spring 2017 menswear collection, presented in the height of summer, in June past—days after the Mayhoola acquisition announcement; Balmain is now owned by the same luxury holding group that has stakes in Valentino, Anya Hindmarch. Qatar, where Mayhoola is based, is the world’s richest country. It’s easy to conjure up images of the lifestyle, borne from our understandings of the world of the superrich from, isn’t it obvious, Instagram. This Balmain collection was something—the Instagram imagery in mind—that would appeal to a customer in the Middle East. From the denim jackets and skinny jeans, tunics and joggers—the collection could easily be transported to that part of the world and worn out by those who thrive on revelry, if a luxurious, impeccably clad revelry. All just a click away from Instagram. 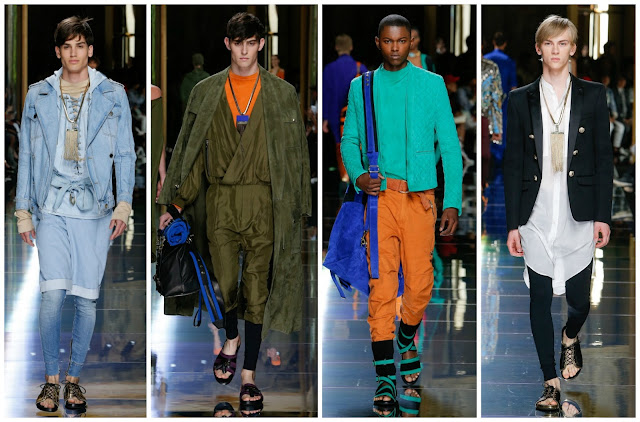 From luxurious denim incarnations Rousteing presented suede jackets with tassels—an annoying addition—and jungle-appropriate khaki greens in the form of overcoats, blazers, and one heavily embellished jacket that certainly costs more than a college tuition. Money isn’t an issue with the Balmain customer—it’s not exactly a label you save your pennies for unless you’re uber-rich, because it will take a considerable amount of time. The consumer has an array of colourful options to choose from. Ponchos for travelling, bomber jackets and skinny jeans for partying, sandals for hitting the beach, shorts for hitting the gym. It seems to have reached peak luxury with Rousteing.

Fashion doesn’t have to be drenched in subtext to be satisfying. Generally, the collections are better but that presence or non-presence of a deeper meaning doesn’t always negate the purpose of that particular fashion show, especially in the modern age where fashion is entertainment.

(Note to editors: it’s acceptable to enjoy yourself at a show without it being on the level of Proust or Hockney, in their respective mediums.)


Instagram, despite its availability for the constructing the picture perfect, superficial life, is a form of escapism for many. Sure, it’s not the Tate or LACMA or the Musée d’Orsay, but that doesn’t mean it can’t be powerful. For many Instagram is a form of escapism. This was Rousteing’s great escape.
Posted by Paulidoodles at 6:00 AM