The world is crazy. Everything is intense.

That is a bold statement to kickstart proceedings in this piece but it’s apt, I’m sure you’d concur.

The political world is chaotic. Here in Ireland, the country voted in the general election in February, but governmental operations didn’t resume for 63 days in which the elected officials negotiated the formation of the government. Former President of Brazil Dilma Rousseff was impeached in late August. Brexit—how could you forget it. Each day the cauldron swirls and new information is brought forth with how the referendum’s result will reshape the United Kingdom, it’s relationship with EU, and Ireland in particular. Above all, the current state of America politics trumps (pardon the pun) everything else.

The 2016 US presidential election has been many things: overlong; dazzling; exhausting; unrelenting; deafening; saddening. There is a nasty rhetoric being amplified. There is questions raised about dubious political movements. Hillary Clinton and Donald J Trump—two of the nation’s most unfavourable candidate in the history of their presidential elections—are currently battling for the title of the 45th President of the United States. Alex Fury, of T: The New York Times Style, aptly described the electoral process as “the Keeping Up with the Kardashians of elections”. Clinton’s been around for years, as the First Lady, when her husband Bill was in office. She is a politician who served as senator in New York state, before being appointed Secretary of State by President Obama in 2009. Trump is a businessman, television producer and the host of reality television game show The Apprentice.

The road to the election commenced in April 2015 when Clinton announced her candidacy. Trump announced in June 2015, and what started as a joke started resulted in a full-fledged campaign and here we are: Donald J Trump is the Republican nominee. 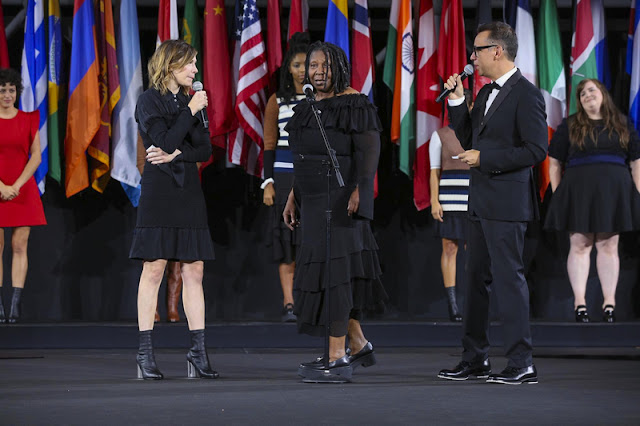 Despite the efforts of publications such as Elle, Vogue, i-D (who boldly devoted an entire issue to campaigning for the Remain vote), Dazed, who all have an incredible reach, 51% of the population decided to leave the European Union (many of them influenced by fear-mongering tactics, misleading and inaccurate information, false promises). But the likes of i-D and Dazed, despite the power they wield, they were simply reaching the liberal minds who they cater to. It was like talking to oneself. But credit where credit is due, I was immensely proud of those publications who chose to use their voice, it makes a difference.

With the U.S. presidential election, things have been different. There have been less collections devoted to the process, to its candidates. At American Vogue, under the leadership of Anna Wintour, the magazine announced they would be endorsing Hillary Clinton. Although politics is a facet to Vogue that is often overlooked despite it’s pointed favouritism, this is the first time the magazine has endorsed a presidential candidate. It came as no surprise seeing as Anna enlisted Marc Jacobs, Tory Burch, Tanya Taylor, the Rag & Bone duo, Thakoon, Diane von Furstenberg and more to design t-shirts which would be sold on the Secretary of State’s website to fund her campaign. Secondly, Anna held a fashion show with Huma Abedin (Clinton’s campaign vice chairperson, and personal assistant).

During New York Fashion Week this season, brand R13 Denim stated loud and clearly who they would, not only voting for, but denouncing, in the run up to November 8. ‘Fuck Trump’ and ‘God Save America’ was emblazoned on silk dresses, sweaters and loose tees. It was a brash statement, amplified with the punk-rock styling. It was emblematic of the 90s and the fearlessness of today’s youths. Some polls show Clinton’s overwhelming popularity among those aged 18-34 (millennials if you must) who plan to vote for her on November 8. Trump on the other hand is struggling with only 21% of young voters backing him. R13 Denim are representative of young people who are out to secure their present and protect their future, and as evinced by their anti-Trump collection, he is not the candidate for them. 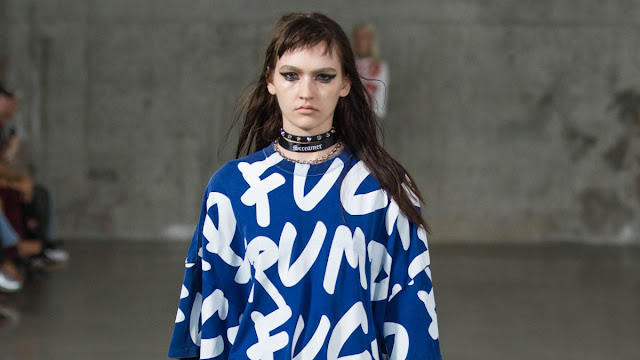 Aside from R13’s unafraid effort, Opening Ceremony was the only other New York brand to channel the current state of political affairs in their theatrical special. While the clothes were overshadowed, the political pageantry was wholly important and welcome during the lacklustre New York Fashion Week—even as somebody with a good memory, I cannot recall those clothes. Their pageant was presented by Portlandia’s Carrie Brownstein and Fred Armisen. The contestants in the pageant included actresses, Whoopi Goldberg, Aidy Bryant, Rowan Blanchard, Natasha Lyonne, Rashida Jones, Aubrey Plaza, Alia Shawkat, Jessica Williams, Diane Guerrero, LGBTQ+ rights activist Sarah McBride, stand-up comedian Ali Wong. The best part of the politically-charged affair was Whoopi Goldberg imparting the importance of voting upon the audience. “If you don’t vote, then you can’t bitch.” 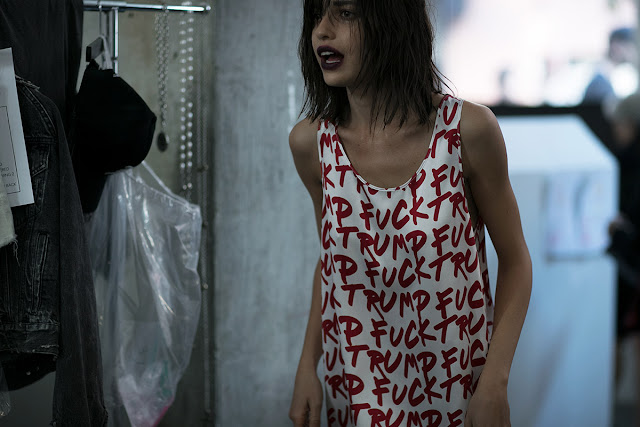 It’s ironic how those who are unable to vote are making exercising their positions of power more than the bands of American designers. It’s symbolic of the vast majority of New York fashion—stale and unpolitical. Around the globe, designers from every corner of the world have been issuing their opinions, namely in Italy, where Donatella Versace has been challenging perceptions of womanhood with her feminist presentations of late. Donatella’s referencing to woman empowerment is not a phoney attempt—she’s serious about what she’s doing and designing. “Take the leap, our past is behind us, our future is up for grabs, take the leap and the net will appear,” intoned Photonz x Violet’s soundtrack for the September show. Presumably Donatella was talking about Clinton, the importance of democratically electing a woman into a position of such power.


Gareth Pugh, back in February during London Fashion Week, also presented work that was gestured to the American election. His skirt-suit-wearing models, an army or posse of sorts, exuded a formidable strength, power. There was a slight element of fear too, courtesy of the harsh styling of the slick hair, the elastic bands on models’ faces, glossy lipsticks and the haunting soundtrack. His collection was a deliberate nod to Clinton: the Democratic blue colour of one suit, for example. It was adorned with 3-D stars—a reference that doesn’t need to be explained. It was presented during the early stages of the election, when the primaries were still being held. Nine months later and it’s still relevance, with the election on Tuesday. 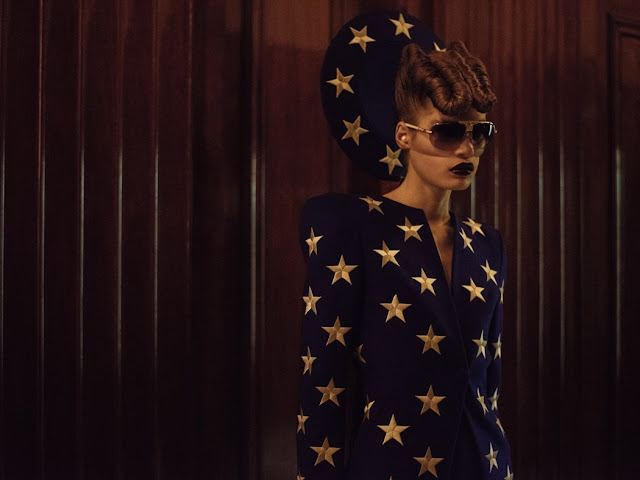 As with every article about the presidential election, there will be fiery accusations of bias on the writer’s part. This article distinguished fashion’s interaction with the presidential election. Positivity has been directed to Hillary Clinton, negativity to Donald J Trump. I cannot present you with a pro-Trump collection because there simple hasn’t been any. I’m sure you can deduce why that is.

Even as an Irish person, with hopes for a future abroad, I’m left in a foggy state of uncertainty. I don’t know what’s ahead. The arts can guide us (many fashion designers and publications have tried), distinguish certain things (the importance of political correctness, inclusivity), but really, we’re all in the dark. Let there be light. 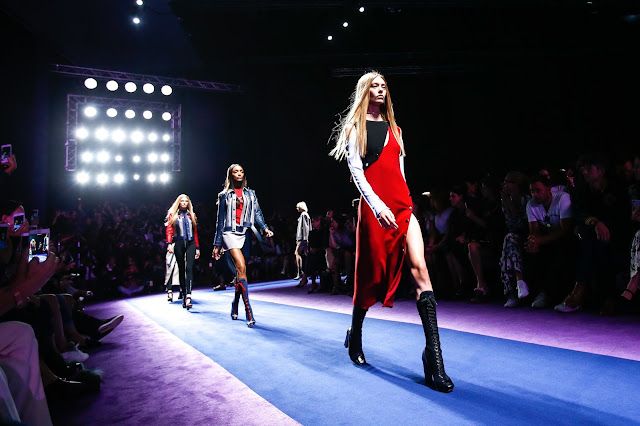