The Saturday during London Fashion Week is always the busiest. There are a million and one to things to do and see, and the “geographical discord” of day two is perhaps most frustrating for the editors and buyers who, in a panic, race to the next show. One heard reports of many editors missing shows due to traffic pandemonium—some resorted to the less glamorous, more efficient public bus or the tube. First thing on the agenda (always an advantage) was the all-important Fashion East presentation where the bright spark—that will soon dominate the London schedule on their own two feet—are given an incubation period, an elevated platform to present their wares.

In recent years Fashion East has produced Caitlin Price (who was subsequently shortlisted for the LVMH Prize), This is the Uniform (now showing in New York), Ed Marler (the ghost of Meadham Kirchhoff), Louise Alsop, knitwear virtuoso Helen Lawrence. Ashley Williams, subject of Monday’s critique, was also among the recent Fashion East graduates. She was on the register since 2013 when she appeared alongside Ryan Lo and Claire Barrow, two prominent names on the London scene.

Mimi Wade foregoes the runway show, although her sassily feminine designs would undoubtedly benefit from a theatrical stomp from one of her petulant looking girls. She favours instead an installation which is available for viewing prior to the runway show. Drawing on filmic references once again, she created a “MimiMount” set, a play on the historic film company Paramount. Mimi is cultivating her niche nicely with saccharine womenswear that is heavily influenced by her grandmother, the Hollywood B-movie actress Pamela Curran.

For Spring 2017 she takes note from “some noir and some 1970s Japanese sci-fi horror films”. Mimi describes the collection as “an angry note on the fridge door covered in bunny rabbit stickers, a passive aggressive floral print and, finally, a cute but nasty postcard that reads, ‘Glad you’re not here.’” Although she was willing to assert the collections sassiness, it was unnecessary: taking one glance at this presentation and you read flirtatiousness and old-world-meets-new-world type glamour. Imagined movie posters, MPAA slogans, logos were all realised on the fabrics, which came in, you guessed it, bright hues.

An endearing love letter to a bygone era and an amusing homage, Mimi Wade is doing her grandmother proud no doubt. 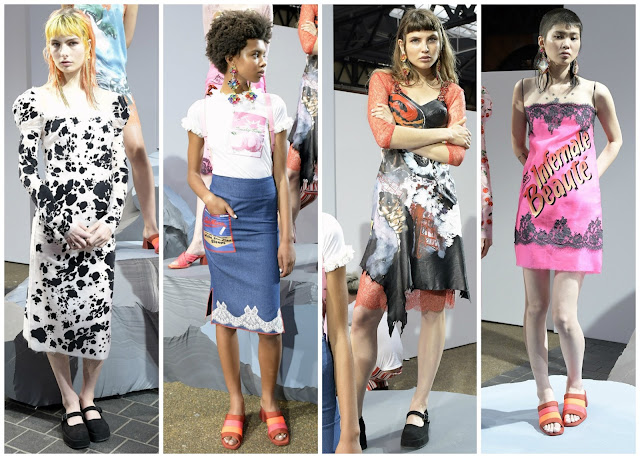 However, Matty is already well known around London. He notably won the L’Oréal Professionnel Creative Award at the Central Saint Martins graduate show in 2015, and the LVMH Graduate Prize. His resume counts Marc Jacobs, Louis Vuitton, and Miu Miu. Prior to his first show he had appeared in Love magazine.

With an impressive reputation preceding him, I was eager to see how Matty’s debut would fare out. ‘Spontaneity’, ‘rainbow’ and ‘offensively saturated tones’ were the keywords from the show notes and aptly describe the collection. A boldly-hued collection complete with fabric shredded and knitted, crocheted and woven like raffia with reflective tape. The focus on fabrication and texture was heightened with the accessories: Coach handbags, Linda Farrow sunglasses. His dazzling agglomeration of fabrics and colours did prove, for some, to be sensory overload, myself included. His love for making clothes and the discotheque are, however, charming.

While Matty’s collection did feature fabric innovation—always a plus amongst young designers who are often too busy aestheticising—you couldn’t help but wonder whether these clothes live beyond the runway. In the right hands, yes. 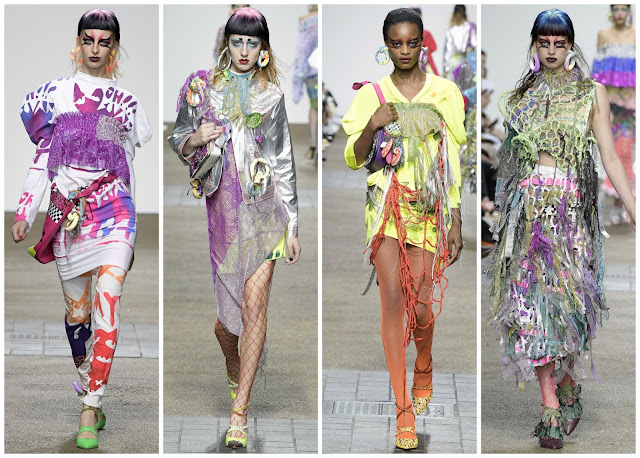 Amie Robertson, who presented subsequent to Matty, was supported by Katie Grand and Anita Bitton last season. She had worked, alongside Matty, at Marc Jacobs on illustrations for his Spring 2016 show. (She and Matty are friends—the shine theory in effect.) Her handmade embroideries quickly caught the eye of the American designer, and they are the defining feature in A.V. Robertson collections.

Her Spring 2017 explored the post-apocalypse where the triffid, a highly venomous plant species, has risen . Day of the Triffids, a 1951 dystopian novel, was the source. In the collection, it took the form of garments inspired by the doctors and scientists’ lab coats; however, they are reconstructed. Vines and tails, the “cosmic spores” that attacked the population and took over the world in the novel take over the models in this collections.


Amie is trying for an intergenerational take on dressing; there were certain pieces in the collection that could work for women of all age but the majority of this collection was destined for the 20- to 29-year-olds of the world. There is room for improvement here and as Amie matures her vision she could be onto something. In the meanwhile we can enjoy her expert embroideries. 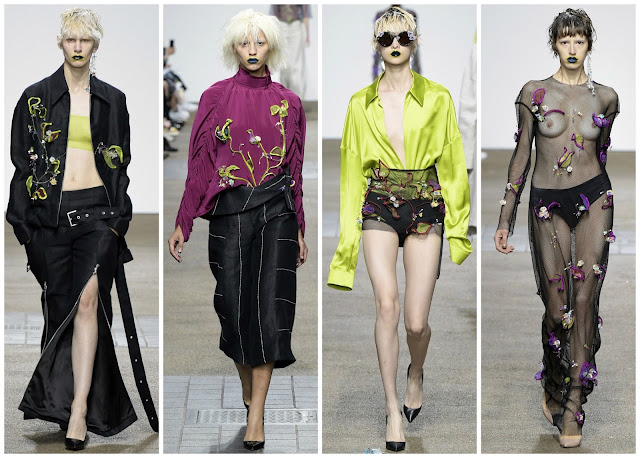 Last but not least was Richard Malone. Hailing from Co Wexford in the southeasterly region of Ireland. While the other three designers propose generational fashion ideas, Richard doesn’t completely buy into that. Yes, there are references to youth culture in Wexford, with the go-faster stripes on tracksuit-like bottoms and cutaways. An older woman, possibly his mother or his aunt, two characters he’s previously referenced, have an ostensible effect on his oeuvre, on the maturity of his work.

Working class culture is engrained in Richard’s work. As aforementioned, Wexford is in the southeast of Ireland, a region that isn’t exactly a hive of activity. The nucleus of Irish commerce can be found in counties Cork and Dublin, also home to the two largest cities. Richard’s mother is an employee in the local Argos. Her uniform continually Even with his more architecturally-inclined garments, his focus is on “comfort rather than restriction.”

There was a counterculture to Instagram within the collection. Notably, Richard doesn’t wish to dress celebrities and participate in celebrity culture. Famous for his sculptural masses that cloud the upper body—those pieces are in fact clip-ons and can change with every wear, nullifying photographic documentation. Moreover, the Irishman had something to say about the waist-trainer craze that has proliferated on the social media platform. Here, Richard offers and alternative, based on corsetry, linking back to the idea of “comfort.”

Many designers accused of misogyny are the ones who restrict and bind their models; they appear stiff and uncomfortable. With these clothes you witnessed the opposite—you get the impression that Richard’s working class background grounds him in reality. While he does channel glamour into the tracksuit-favouring youth culture aspect to his work and the workwear for grownups, he never strays into illusory worlds. That is why he is one of the best young designers working today. 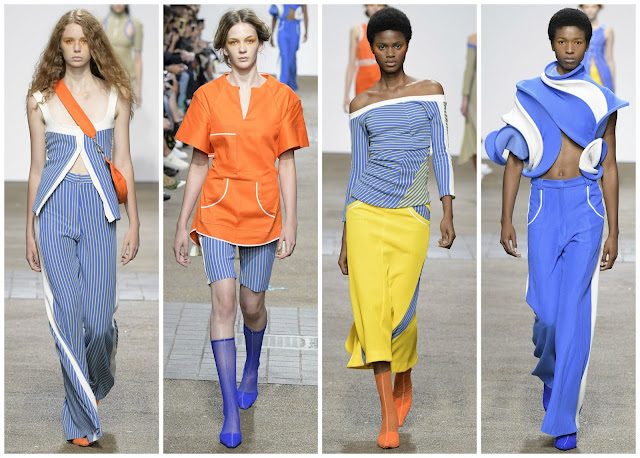