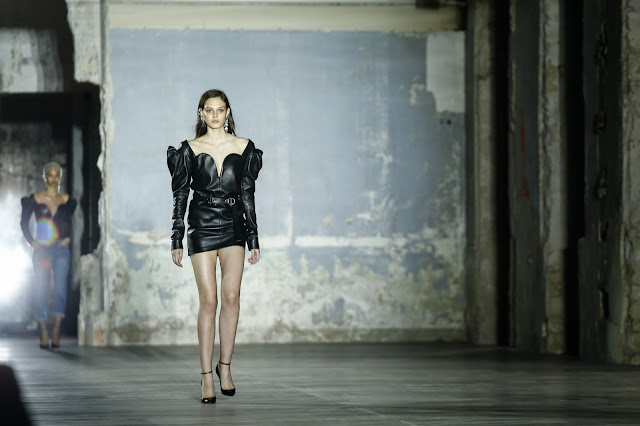 This Paris Fashion Week has undoubtedly revolved around the idea of it being a season of beginnings. There were three highly anticipated debuts on the first few days of the week, in the French capital, where three incredible designers were instated at the three historic houses.

Anthony Vaccarello took centre stage on the first day of Paris Fashion Week, as he always does. This time, however, Vaccarello wasn’t presenting his namesake collection but his debut at Saint Laurent. He’s reinstated the ‘Y’, although it never left—the beauty and handbags maintained the crucial letter. It was a defiant act. A crane hoisting the iconic logo, missing during Hedi Slimane’s controversial reign, was one of the more Instagrammable installations at the show. The venue is currently under renovation much like the house, and plans state this will be the new headquarters.

Vaccarello’s collection was punctuated by his signatures—micro dresses, ample sexuality, simplicity. There were a few standouts, such as the vinyl mini dress with puffy sleeves, a reworking of the Le Smoking tuxedo, an ashen lace dress worn by Selena Forrest. Things were kept predominately black, with the exceptions of blue denim and gold lamé. Vaccarello’s take on 80s power dressing at his own label has visibly permeated his new position at YSL. There were point-toe pumps where the heel was the YSL logo, a further affirmation that this is the future Vaccarello envisions for his creative-directorship.

It’s difficult to restrain oneself from creating a checklist of YSL-isms, to see if Vaccarello touches upon them. Androgyny? When Yves Saint Laurent dressed women in tuxedos in the 1960s there was both uproar and celebration. He was revolutionising the way women dressed. Feminism? Vaccarello was thinking about #FreeTheNipple, as YSL did back in the day, before Instagram’s founder was even born. A male model emerged in a sheer black shirt before a female model wore her iteration. It was decidedly similar to a blouse from the late 60s. Artistic references? It was a show founded on attitude, rather than artistic references.

This was a predictable collection, although there was opportunity for it not to be. Vaccarello exercised his handwriting in ways that we’ve seen many times on the runway in Paris. However, it was a refreshing, palatable riposte to the Hedi era, even if it was unmemorable. 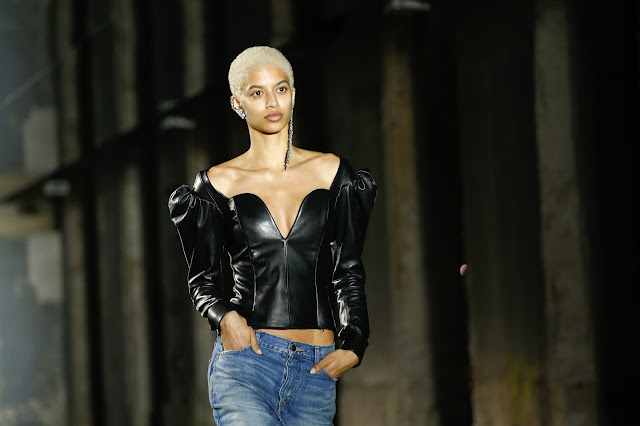 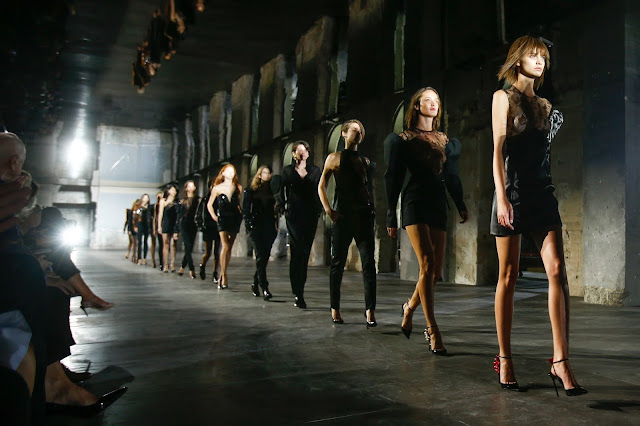 There should be no qualms about Bouchra Jarrar being a designer of breathtaking clothing. Until earlier this year she was exclusively a designer of haute couture. The majority of fashion world was pleasantly surprised to hear of her appointment in April, though many still haven’t fully recovered from the lamentable loss of Alber Elbaz last year. His fourteen year tenure ended disagreeably.

Jarrar started things expectedly. In the cosy enclaves of the varnished, wood-floored Salon de Hôtel de Ville reintroduced warmness to the Lanvin vocabulary. It was a characteristic Chemena Kamali and Lucio Finale proposed in their turn as placeholders. Did it work? Yes and no. There was definitely a sense of sensuality present in the collection. That trait is attributable to both Jarrar and her predecessor. In the context of Lanvin, it predates both modern date interpreters, first visible in the founder, Jeanne Lanvin’s designs. But there was also the impression that shiny silks, floaty chiffon, delicate stripes, feather embroideries, lace accents and loose silhouettes weren’t evocative of modern Lanvin.

References to Ms Lanvin are fantastic—it’s great to see any designer scour the archive in search of inspiration, but glossing over the most influential chapter in the house’s recent history seems a little wrong. Don’t confuse this critic as an Elbaz loyalist, I’m not, but the distinct lack of contact between Jarrar and him made this a jarring and forgettable introduction. 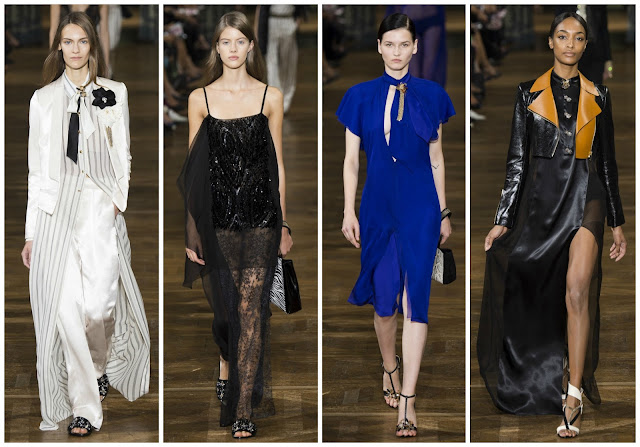 Maria Grazia Chiuri took her first bow as creative director at the house of Christian Dior, yesterday afternoon, to a heartwarming standing ovation. Chiuri has become a fashion darling over the years, transforming the house of Valentino into the company that we all know today. Under Chiuri’s directorship, and her partner in design Pier Paolo Piccoli, the formidable duo oversaw the company reaching $1 billion dollar statement, an achievement for any business. During the summer, a long-awaited announcement revealed that Chiuri would be parting ways with Piccoli, her design partner of many years, to begin a new chapter in her working life. Her appointment at Dior is an important one: she is the first woman in the company’s 70 year history to head the creative side of things.

Her show was feverishly anticipated. What would she do? How would she change Dior, post-Raf? The answer might or might not surprise you. She stayed true to her strong suits, lending a Valentino sensibility to the collection. She continued to interpret modern femininity in a restrained, conservative manner. Most boldly, she adopted a feminist stance, something we’re not often exposed to at august brands.

“We Should All Be Feminists” read one t-shirt. Chimamanda Ngozi Adichie’s brilliant Ted talk on feminism inspired that one. Chiuri invited Adichie to sit front row amidst Dior muses, Jennifer Lawrence (who will surely strike up a marvellous friendship with Chiuri), Marion Cotillard and Natalie Portman. This brought one to the statement Lou Stoppard made this week on a panel on SHOWstudio, about the commodification of feminism. Sending a t-shirt with a feminist slogan down the runway is fantastic, it highlights the importance of feminism, but does it dilute the true meaning? In this case, no. Chiuri is a passionate feminist who is making sure that womanhood, feminism are rooted in her Dior iteration. 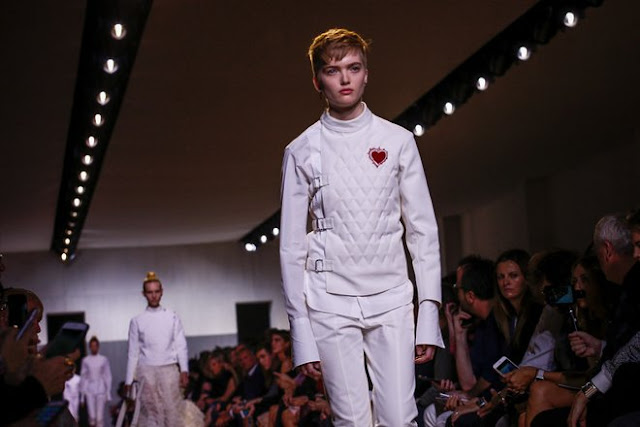 Her Dior iteration, what is it? A melting pot of Mr. Dior, Galliano, Raf and a firm proposal of her own. She opened the show with fencing costumes before progressing into ballet outfits (reminiscent of the last Valentino ready-to-wear collection). There were dream dresses, like those synonymous with her occupancy at Valentino. Frothy tulle in shades of red, black and white took to the runway, charming the audience. It was enjoyable to see a melange of references, something that Vaccarello and Jarrar could’ve experimented with more.

In all, the collection was a smashing debut but it bore too much of a resemblance to her Valentino days. That is her identity as a designer, but where the worlds of an Italian brand and French brand collide, the message begins to muddle.

What the three designers this week had in common was that their personal identities overshadowed the house codes. All round, clothes were fine. Vaccarello didn’t provoke like Hedi Slimane before him, nor did he create exceptional clothing. Jarrar’s departure from Alber Elbaz’s jewel-toned, drape-centric dressing was a slight misstep; with more emphasis on craft you could’ve fooled this critic into thinking it was a collection for her eponymous label. Chiuri was closest to the mark at capturing the aesthetic of Christian Dior, but there was too much sampling of her Valentino days.

A season of new beginnings. It marked the start of a cycle that will hopefully last longer than three years—somehow, I gather one of these designers are likely to bow out, statistically speaking. September 2019, we’ll know then. 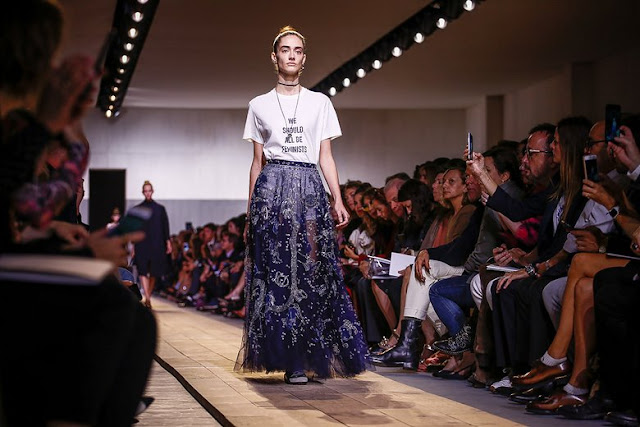