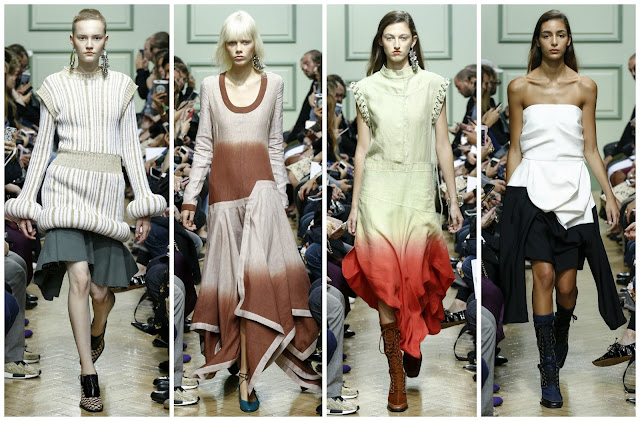 The J.W. Anderson show during London Fashion Week is simply the most anticipated show of the week. He is a forward-thinking innovator with a passion for startling and impressing his audience, simultaneously. There’s a simplicity to his shows too, amidst the deluge of ideas. There’s no overt theatricality, in fact there’s the opposite—guests are confined to narrow rows, a democratic approach to fashion show seating; moreover, the guests are positioned inches away from the models who fleetingly storm past. There’s no Instagirl detracting from the brilliant clothes. (Bella Hadid was the face of the Fall 2016 advertising campaign, but she was a no-show here). It’s pure design wizardry.

What was on his mind for Spring 2017? Let me rephrase that: what wasn’t on his mind for Spring 2017? It would be easier to answer. Dancing on the beach in Ibiza and Spanish sensibilities, Henry VIII and the Renaissance, rest and relaxation, balancing high-strung attitudes with a graceful, easy air. What was most intriguing about this catalogue of ideas was the fact that these were opposite to the picture you’d paint of Anderson’s cerebral fashions. Ease is not a characteristic you’d immediately pin to his work—generally speaking, it’s figure-hugging and tight, but in a refined manner. This was a farewell to all that but it didn’t bid adieu to Anderson’s unique touch.

This collection was noticeably influenced by Loewe, the 170-year-old Spanish luxury brand that Anderson is currently fronting. There he is designing for a customer who is probably older than his J.W. Anderson woman. What they both have in common is that they strive for modernity and luxury. That was on display at his London presentation. A Henry VIII-worthy shirt opened the show with 3-D quilted patterns, over a sunset-hued handkerchief hem dress. 18th century meets summer 2016. The following looks operated in a similar vein: light, swishy fabrics, handkerchief hems floating in the wind (one dress appeared as a life-sized, refashioned napkin—only at J.W. Anderson), and more Henry VIII remixes. 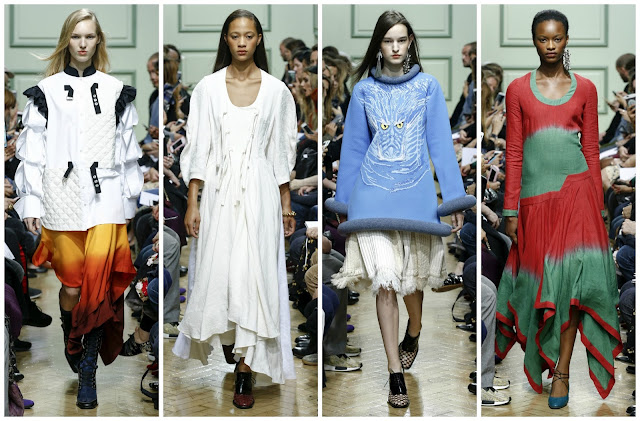 Seeing this softer side to Anderson at his namesake label is an unprecedented mood. The relaxed mood is preserved for his prolific Loewe collections. They weren’t unwelcome here. Underneath an angry blue owl sweater with inflated hemlines, was a wool skirt equipped with tassels—it could’ve easily been stolen from a Loewe collection. Ditto Mayowa Nicholas’ red-green-blend handkerchief hem dress with an asymmetrical waist, handkerchief hem and round neck.

As aforementioned, the oddities of a J.W. Anderson were not lost under this modern interpretation of nonchalance. The closing dresses had randomly attached sleeves, serving no other purpose than to mimic—what I thought—were wetsuits. The padded jackets with layered sleeves and belt fastenings reminded me of a straightjacket. It wouldn’t be a J.W. Anderson show without these obscure perversities.


The fashion press were quick to latch onto the narrative that this was Anderson’s most relaxed, most “commercial” offering to date. Relaxed, yes; commercial, certainly not as instantly palatable to a shopper as last season. There were some great selling points here that will surely please the woman on the hunt for something different, something special. Difference and uniqueness, that’s his legacy right there.
Posted by Paulidoodles at 6:00 AM