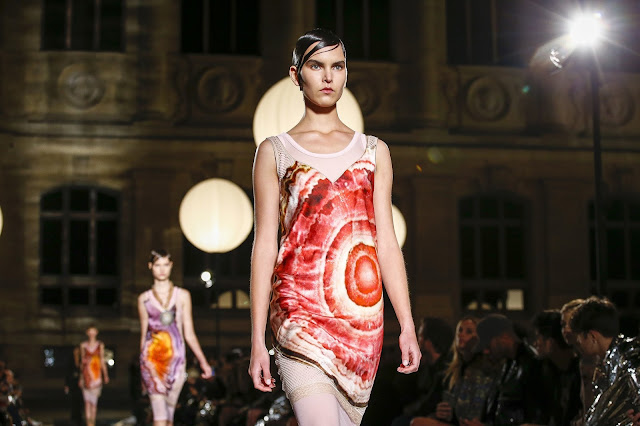 Riccardo Tisci was inspired by Egyptian symbolism for Fall 2016. Entombing his guests in a labyrinthine runway system, the models, with their bleached eyebrows and decadently printed outfits, attempted to make their way around the structure. In all honesty, it didn’t work. Even the models, who probably rehearsed earlier in the evening couldn’t unlock the maze. Many guests weren’t able to see certain looks because a model took the wrong turn and skipped an entire row. Lesson learned: Tisci made up for an overcomplicated set piece that overshadowed great clothes with… more great clothes. His Spring 2017 collection was hosted in the Jardin des Plantes at the Musée National d’Histoire Naturelle on Sunday night. The sun had set and the brand handed out Mylar blankets to guests.

Tisci wanted to create something “more sensual and more powerful” to highlight the women of the world. He commented on the battle for presidency between Hillary Clinton and Donald Trump, although indirectly. (Side note: most designers to reference the US presidential election have been non-Americans.) Front row were Courtney Love and Kim Kardashian West (who was victim to an armed-robbery in the early hours of Monday morning in her Parisian apartment), two women who endlessly inspire Tisci. 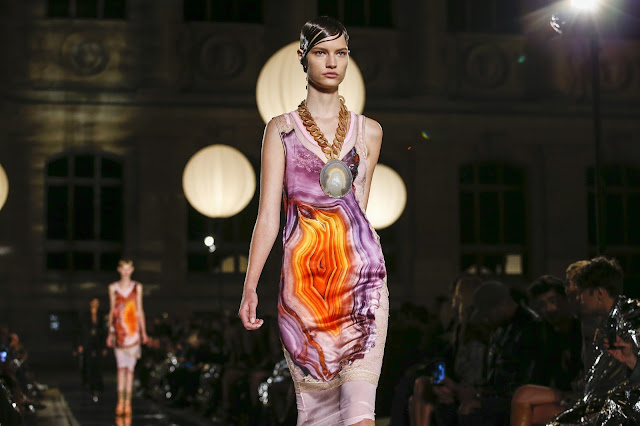 His deliverance of sensuality and power came through a collection grounded more in formality, rather than his usual affinity for sportswear—the overall theme was “the power of nature”. Introduced to crystals and their supposed healing capabilities by friend and collaborator, the performance artist, Marina Abramović, Tisci harnessed their energy and projected them onto his fabrics in the realisation of prints. Agate, for example, was printed on the opening look (worn by first-time walker Polina Park), and the ensuing two looks. According to crystal experts, agate is representative of protections, strength and harmony. Those three words are also regulars in Tisci’s design language.

Oftentimes there is hardness in Tisci’s visuals. Imagery has the ability to do his work an injustice, especially seeing as there is feather-light softness to his work, even in those expertly tailored tuxedos or figure-hugging dresses with bold shoulders. Ditto, the heavy talisman-like stone necklaces the models wore around their necks. Although the jewellery physically weighed them down, you can imagine that the spirit was lifted out of the doldrums, into a peaceful state.

Perhaps its the mining of religious references that allows Tisci this wizardly conjuration, but then, there were none to be found here. There was an unnerving spirituality instead. A multi-coloured, pole-dot dress resembled an insect; imagery of fires sewn onto dresses as if the prints themselves had been licked by the embers of a fire—the symbolism to be drawn from insects and fire is overwhelming.


Riccardo Tisci has developed a neat set of codes for Givenchy. There has been “well-balanced development in all categories” at the house in the first half of 2016. It is a brave move for Tisci to move away from the sportswear elements that he has rooted in this brand, especially seeing how successful they are. Many other designers would begin to design unimaginatively, but Tisci won’t settle for that. He’ll continue to provoke even if his spirituality and crystal fixation are a tad passé. 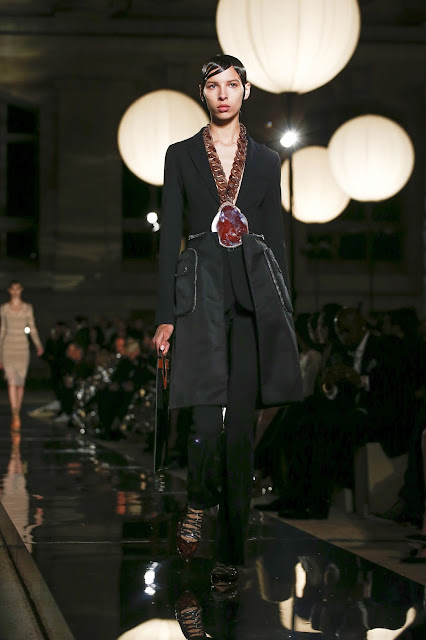 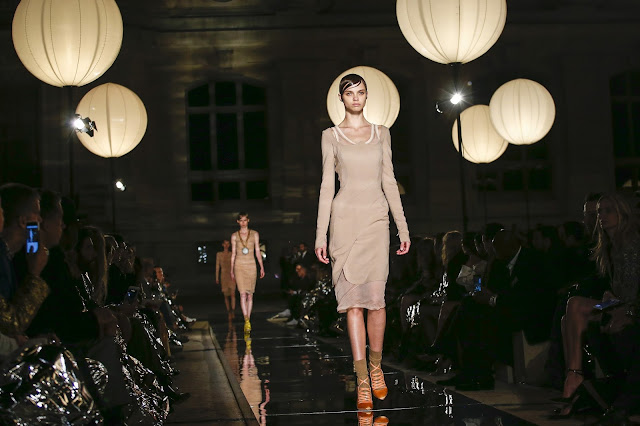 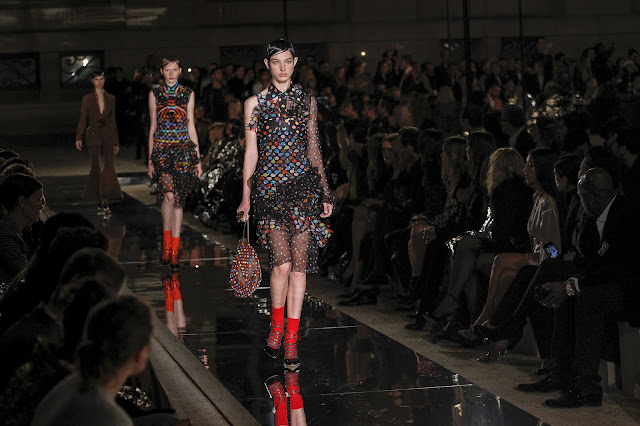 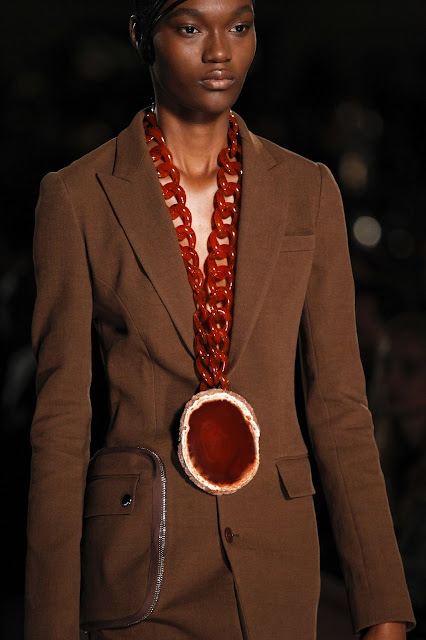 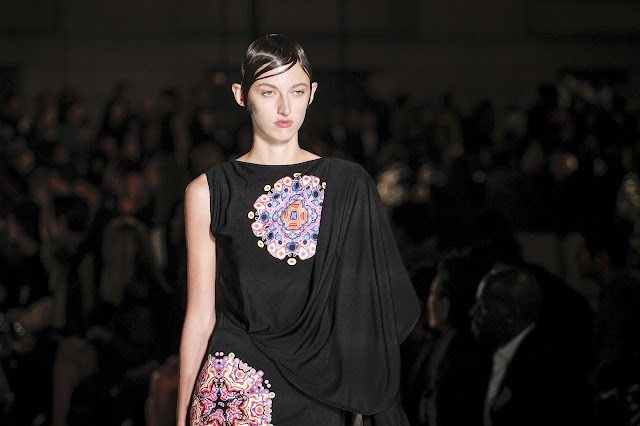 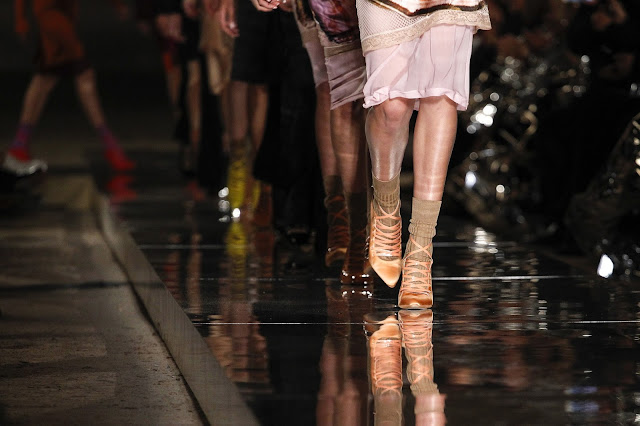 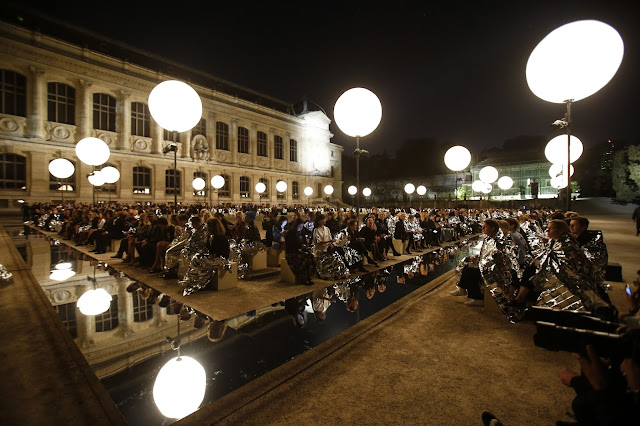