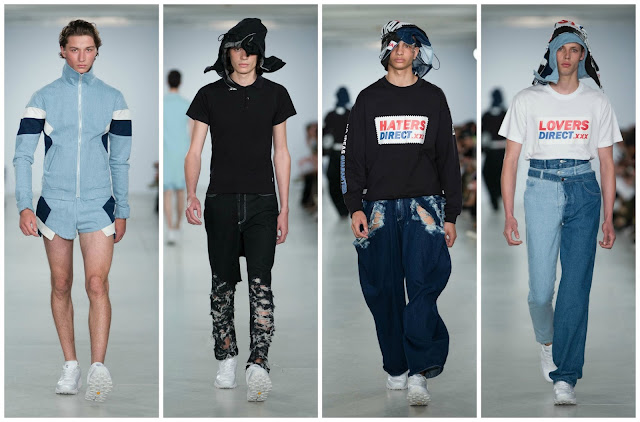 When Christopher Shannon opted out of the runway show format in favour of a static presentation his collection generated quite some censure. Critics were upset that Shannon had foregone the runway show because the energy, his vision—slightly perverse look at masculinity—were diluted. I’m partial to presentations so I would easily extend a pass to Shannon, who created an poorly-received show that was actually stronger than it was portrayed to be by the fashion media. There were some interesting pieces in that collection. The way he explored the babysitter’s boyfriend’s clothes, as seen through the eyes of a child, up north in Liverpool, in the 1990s, was equal parts dazzling and riveting.

Fall 2016 wasn’t much to the liking of the fashion press, so Spring 2017 was expectedly raved about. Returning to 180 The Strand, the official BFC Show Space for London Collections: Men, his models, channelling a dated spirit of masculinity, wore denim! Yes, denim. Not exciting on face value, but Shannon interpreted the age-old item in a myriad of ways. Bomber jackets and bum shorts, tracksuits and windbreakers; shredded, ripped, ‘distressed’, clean cut (squeaky clean, with a white t-shirt, on a Ken-like model). In other instances they acted as leg warmers, though my mind reverted to images of those who wear they’re trousers loose and they end up around their ankles. Indigo, light-wash chambray, true blues, Shannon served his offering four ways.

It might seem facile to base your collection around something as simple as denim, but scrutinising the collection, you’ll lay witness to the references to 90s hip-hop culture and sportswear, iconic men such as James Dean whose very image is engrained in the basic wardrobe staple, and also the perverse interpretations of society today.

Denim is political after all. It symbolised working class culture in America, and globally. (Even the eternally fashionable masthead The Economist wrote an article on the meaning of blue jeans. They’re value for money. To dissect a purchase of an expensive denim jacket or pair of jeans, one should direct their attention to the price-per-wear methodology. Realistically, you’ll wear them more than any price tag can amount to. In the context of high fashion, it’s even more important seeing as prices dwarf high street retailers’.


Christopher Shannon’s been in business for 8 years. He prods and pokes his audience, and willingly they return each season for a fresh batch of ideas. While the statement written on a shopping bag accessory read “100% Recycled Ideas”—signifying fashion’s current affinity for endless remixing—it’s hard not to side with Shannon. His clothes may muse on the mundane, everyday normality, but there’s an innate specialness to his work. 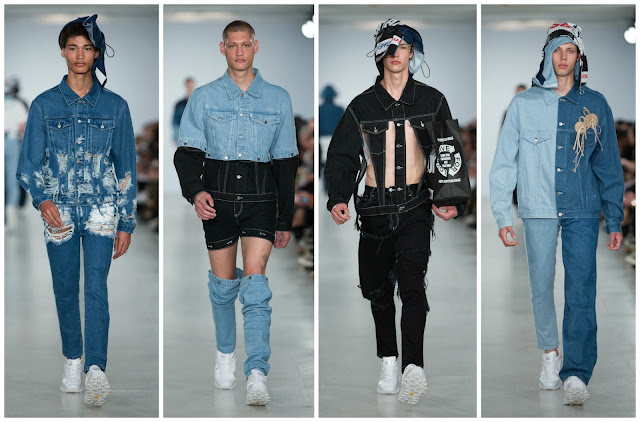