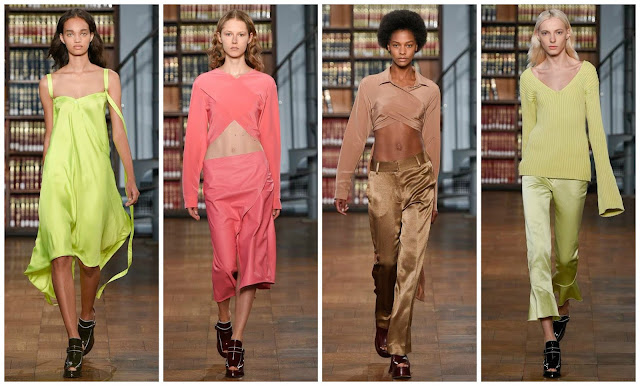 We’re five days into New York Fashion Week and next spring’s trend has already been decided: it’s easy and relaxed. This languidness is often associated with spring and it has underscored many New York collections; it was seen at Victoria Beckham yesterday morning, Alexander Wang, Jonathan Simkhai have all proclaimed themselves as dressers for the carefree summer. Sies Marjan has joined the extensive list of names to also serve this group of women in search of uncluttered, uncomplicated clothing with a dash of complexity.

Sies Marjan exploded onto the New York scene last season. To draw attention on the fashion week schedule you need to be a buzz-worthy emerging designer or absolutely wacky. Sometimes it’s a mixture of both that make it all the more welcome. Luckily in New York, though the gaps are filled, editors are willing to make a brief excursion for the sake of a flashy new name. In the case of Sies Marjan, designer Sander Lak isn’t exactly new to the industry. He’s worked for Marc Jacobs, 3.1 Phillip Lim, Balmain (when Christophe Decarnin was creative director) and most recently, as head of design at Dries van Noten. The show took place in a worn and torn venue in Tribeca, and the fashion pack, amongst them Anna Wintour, flocked for this exuberant debut.

Flash forward six months and Beyonce has worn a look propelling Lak’s work to industry-wide stardom. If Anna, Stefano Tonchi, Vanessa Friedman, Susie Lau, and the 28 global retailers are paying attention then that’s an indication of the brand’s current standing in an overpopulated, divisive fashion industry. The omnipotence of the label’s décontracté wares in fall’s magazine pages was also unsurprising given the warm reception throughout the year. No consumer-facing shows, no see-now, buy-now, wear-now, no frills—just great clothes.

The label released a short film to accompany the Spring 2017 collection, art directed by Christopher Simmonds, . Released prior to the show the film explored the semantics of entertainment and celebrity culture. The soundscape began with the overexcited narration of an American football game which then entered a Mila Kunis soundbite before visiting a Joan Rivers red carpet interview. Charlotte Lindvig, Julia Banas, Karly Loyce, Mali Koopman lazing in the neon lights. The neon lights were reflected in the collection, the colour palette was made up of neons and a few more subdued hues.

A few standouts: the chartreuse silk dress that kickstarted proceedings, flowing gracefully behind the model as she stomped the runway in the library at the House of the New York City Bar Association in Manhattan. There was a cocoa brown cropped wrap-shirt—a new term, coined by me just now. A ribbed sweater in lime green with matching silk, calf-length, flared trousers was a brilliant outfit; a faux-fur coat in duck egg with buttoned-down silk shirt and a pleated chiffon skirt, ditto. There was a surplus of strong clothing here.


The effervescence at this Sies Marjan show was charming. Lak is one of New York’s most special additions in recent years. I hope he’s here to stay. 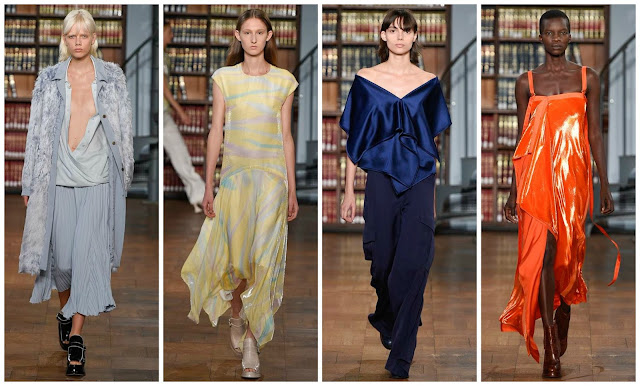