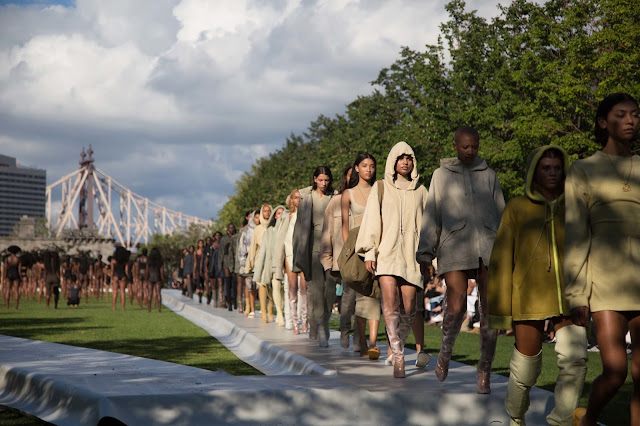 It felt as though the Spring 2017 collections in New York have come and gone in a flash.

My predictions that the week would be a good one were, in fact, correct, speaking subjectively. The shows were filled with mostly great clothes, mostly without any intellectual grounding. It was all about ease and relaxation in New York this season. Those two buzzwords flew hither and thither throughout my reportage this week and they’re worthy descriptors for what we saw on the runways. Everyone from Joseph Altuzarra to the studio team at Oscar de la Renta to Victoria Beckham and the a long list of new designers were paring things back—simplicity, another keyword.

The week kicked off on September 7 when impresario, rapper, designer, producer Kanye West held 1,000 members of the fashion industry captive for five hours. That sounds bad, but frankly that’s how the attendees reacted. Vanessa Friedman argued that Kanye still doesn’t have anything to say, Alyssa Vingan Klein highlighted how next season she won’t attend, Stella Bugbee went as far tweeting “Boycott #YeezySeason4”. A whole lot of commotion for one label. West’s peculiar performance artist collaboration, Vanessa Beecroft, conducted the whole show. Street-cast models lined the lush grass at the Franklin D. Roosevelt Four Freedoms Park on Roosevelt Island. An hour and a half later, a second procession of models took to the runway in clothes that displayed little progression or departure from last season’s collection. Still as confusing, still as boring.

Tom Ford also presented on the same day as Kanye West which proved for quite amusing fashion journalism the following morning. Journalists were quick to compare the two presentations, how Kanye made them his bitch for a few hours and Tom wined, dined (at the newly opened Four Seasons Restaurant on Park Avenue) and partied with his crowd. Just rereading that sentence proves who the master is in this situation. His collection was a look at 70s office-wear with ample sexuality and great selling points. I dismissed him as unimportant designer in terms of fashion in 2016, but this collection proved me wrong. He’s still one of the greats. 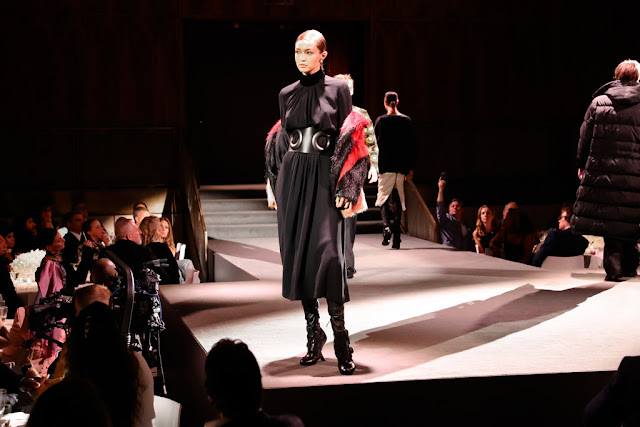 Kanye West and Tom Ford both brought up important talking points for New York Fashion Week, ones that I continually referred back to after seeing a day’s worth of collections. When does spectacle overshadow the clothes? It happened repeatedly during the week. Tommy Hilfiger’s attempt of reenergising his already thriving business came in the form of a Gigi Hadid collaboration. The show was staged at the Tommy Pier—imagine a functioning pier equipped with hot dog and burger joints, carnival games and more. It truly was a circus of happenings and it outshone the clothes that took to the runway. Taylor Swift (90 million followers on Instagram) was front row, too. Coupled with Gigi’s 22 million that makes a whopping 112 million followers which in layman’s terms translates to a lot of sales for Tommy Hilfiger.

Elsewhere designers such as Alexander Wang, Opening Ceremony, Eckhaus Latta experimented with the spectacular showcases. Alexander Wang is skilled at this game. Firstly he let his models take to the runway in his compelling Spring & Resort 2017 collections, before debuting his adidas originals collaboration and then unleashing the #WANGFEST upon his audience—it had 7-Eleven, McDonald’s, Desiigner & Skrillex, and merchandise. While the after-party exceeded the meaning of ‘hedonism’, the clothes, in my opinion, received my undivided attention. Similarly, Mike Eckhaus and Zoe Latta continued to build upon the artfully potent brand of self-expression. With an age and size positive casting, they staged their show in Seward Park in the Lower East Side. The show wasn’t overshadowed by the open-air performance. 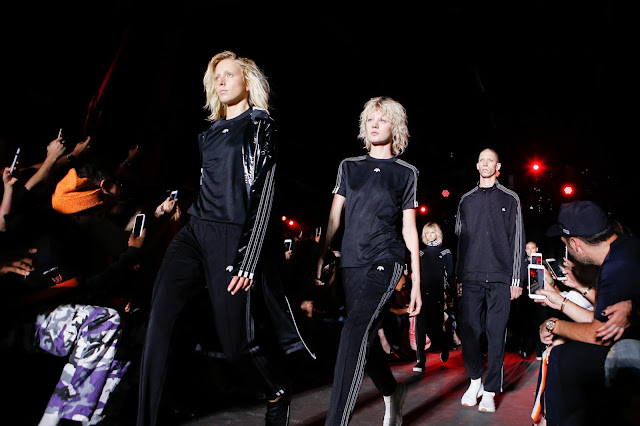 Sadly, in the case of Opening Ceremony, the designers Carol Lim and Humberto Leon, missed the mark with their execution. The models walked the catwalk in the latest, slightly underwhelming collection. Portlandia co-stars Fred Armisen and Carrie Brownstein hosted a politically-motivated ‘Pageant of the People’ complete with an assortment of celebrities such as Rowan Blanchard, Whoopi Goldberg, Natasha Lyonne, Aubrey Plaza and more. This was a case where political pageantry (even if for the greater good) dwarfed the clothes, the real reason we attend fashion week.

Clothes—there was a lot of them. I attempted to pay attention to as many as possible and something in particular was niggling at the back of my head. In 2016, style is worth more than substance. Ryan Roche, an impressive knitwear virtuoso, Brock Collection, a husband and wife duo creating proper feminine garb—both of these labels create clothes that are lovely to look at, but that’s it. There’s nothing emotionally moving or intellectually challenging about them, and if there’s an insistence that there is intellectual basis it comes off as superficial, impossible. It drains the excitement from fashion shows which is an awful thing to have happen.

Joseph Altuzarra was the exact opposite of this. The designer is currently in his eight year in business and the only way is up with him. His thrilling spring collection was not only easily digestible and beautiful, it owned its own frivolity which contributes to the larger conspiracy that fashion is a frivolous thing. Altuzarra had no shame in sharing this to press and buyers at his show on Sunday evening. He wanted it to be about fun, he wanted it to be cheeky. He did that, and even though there wasn’t much substance, the clothes were energetic enough to cover for that. If you ask me, that’s a true talent these days. 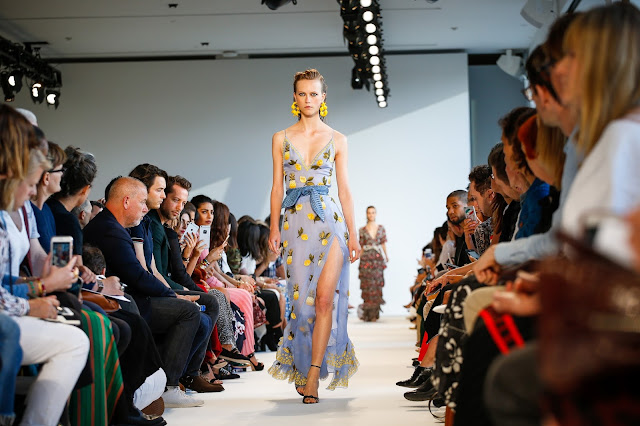 Other talents who floored me this past week were the Rodarte sisters on Wednesday. Laura and Kate Mulleavy are amongst my favourite designers. Last season they were the beacon of light during a lacklustre New York Fashion Week, and once again, they take pride of place atop my list of favourite collections of the week. Inspired by a 1970s Spanish film called The Spirit of the Beehive and their own Californian roots, as well as the American West, their collection surpassed all expectations and trumped everyone else on schedule… yet again.

This New York Fashion Week highlighted many important facts. Many designers waved goodbye to seasons, others to so-called ’outdated’ business models, to presenting a season ahead. Laura Kim and Fernando Garcia’s exceptional Monse presentation has caught the attention of a wider audience now that they’ve been appointed to succeed the empty creative director position at Oscar de la Renta; their first presentation is slated for February. Then there’s Raf Simons, the dark horse, who’s expected to assume position of chief creative officer at Calvin Klein in February. Raf at Calvin will be like the reveal of the bigger, badder villain in a movie sequel. Except in this case it’s sure to be thrilling and a redefinition of a classic American brand. 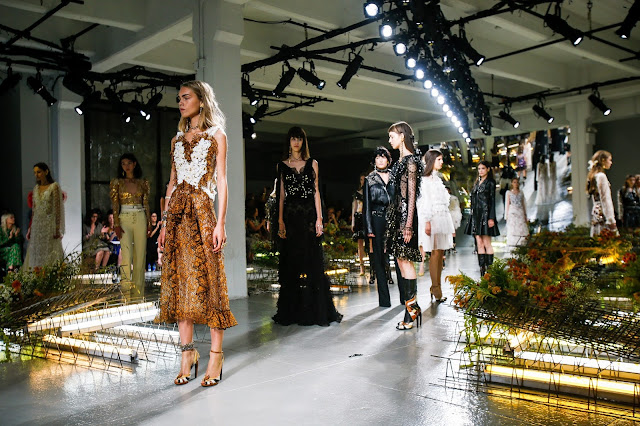 The finale at Rodarte
Photo Credit: voguerunway.com
Posted by Paulidoodles at 6:00 AM