Due to unforeseen circumstances—my laziness—I didn’t upload a post at the end of July called “Spring 2017 in July 2016, Why?” The post was to comment on the womenswear collections being presented early, while resort, pre-fall, couture and menswear were still being released. Menswear shows six to seven months in advance and there’ll be no changing that but I don’t necessarily think there’s much point in shifting the womenswear schedule. If anything, it allows for less distraction seeing as the customer will be presented with new clothes in four to six months. Many designers are switching up their modes of operating, consolidating womenswear and menswear, presenting during men’s fashion week. Labels such as Sibling, Julien David, Damir Doma and Vetements have all presented their Spring 2017 collections, as early as June—a year before the clothes are intended to be worn.

Others meanwhile are further complicating the structure of the fashion industry—is it breaking out of the system or forming an annoying amorphous entity that will damage the global fashion industry? I’m inclined to settle on the latter given systems are implemented for a reason. If designers are worried about customers getting bored waiting for a collection drop they shouldn’t release the clothes sooner, they should simply design better clothing. I don’t believe that fashion is dead, but sometimes, discussions like these would make you think otherwise.

Public School, fronted by Dao-Yi Chow and Maxwell Osborne, has ‘broken out of the system’. The designers are no longer presenting their collections at New York Fashion Week and they’ve consolidated their womenswear and menswear. To throw another spanner in the works, they’ve decided to forego spring/summer, fall/winter models in favour of labelling their shows “Collection One” and so forth. It’s not difficult to comprehend, but is this complication necessary? 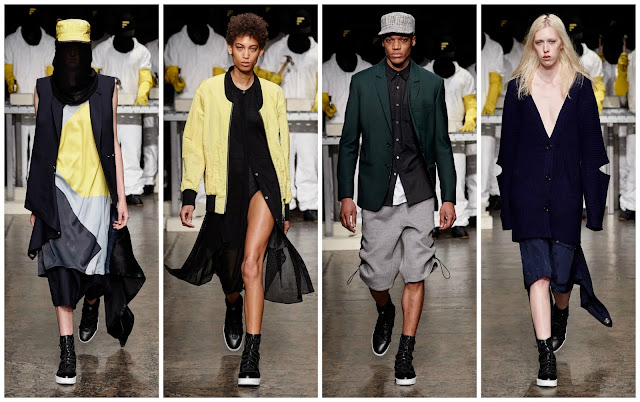 In early June, American press and international buyers returned to New York from a Brazilian, Cuban and British expedition only to view more resort collections, place orders and scribe reviews. Chow and Osborne jolted an audience with a presentation on a Wednesday afternoon. When the lights came, masked workers hammered away at a work station. Dressed in white bodysuits it impressed an ominous mood. The opening look, in grey, yellow and black—the first glimpse of the guerrilla uniform the designers wanted to create with this collection—was complete a beekeeper’s hat and a yellow cap. Strangely stylish or plain strange?

The guerrilla uniform was packed with Public School staples: a riff on the hoodie, blazers and flowing jackets, trans-seasonal coats, sneakers—of course. Through the looking glass you could pick up on the swishy femininity or the attempt to create unisex offerings. It all came in grey and black, bottle green and steel blue. There were occasional bursts of lemon yellow but for the most part the collection was muted, which is where it faltered. It was wholly forgettable and depressingly drab. This was disappointing given the breathing space and pressure alleviation the duo allowed themselves. Credit is due for them embarking as lone wolves in a commercially conservative New York fashion scene, even if it does just muddle things even more.

The fashion press are hyperbolising the “fashion system’s end” and the effect it has on designers could be detrimental. Smaller brands will wither away while the big ones continually prosper. Not that fashion is a meritocracy, but things will become more undemocratic and inaccessible and that’s not what fashion is about.


The beauty of Public School presenting at New York Fashion Week is that international press and buyers, amongst the local force, will have the luxury of viewing the collection. With this presentation, there has been an isolation of important international press, who realistically aren’t going to take another week out of their already busy schedules or personal lives to travel to New York for one show. They don’t have that draw. Yet. But there’s still time to reconsider. 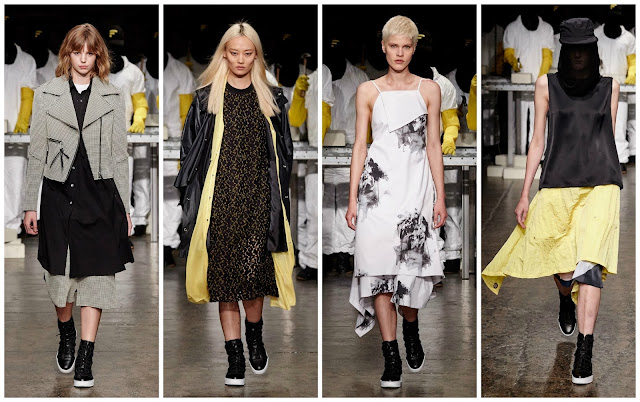