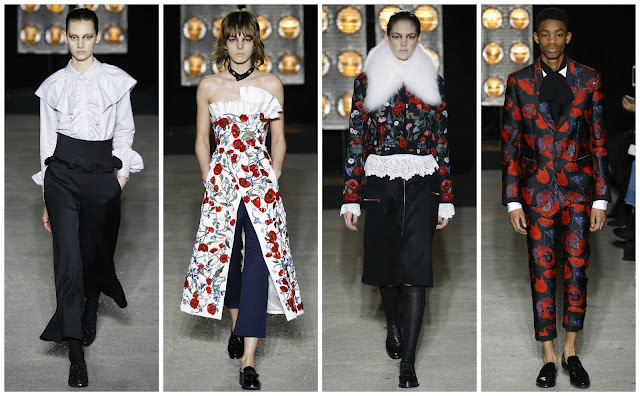 A long time ago men and women dressed equally as extravagant. Everyone wore elaborate costumes, especially the superrich. Their outfits were dripping with lace, punctuated with punchy hues: fearlessness prevailed. Throughout the ages, messages became muddled. Men dressed in suits, women dressed in dressed in dresses. As time’s gone by, people are beginning to return to a maximalist approach. The antithesis to minimalism, labels like Gucci have been ushering societal norms back to a time when both men and women were dressing boldly. Frankly, it’s about time people spice things up.

Osman Yousefzada wanted to achieve this with his Fall 2016 collection, presented at the Bankside Vaults in February during London Fashion Week.  The British designer presented menswear alongside womenswear, both equally as daring and heroic. The book Little Lord Fauntleroy by Frances Hodgson Burnett and the 1980s Buffalo movement. The two contrasted brilliantly. The formality of the 1880s against the radical, sexy 1980s. In the 1880s, flamboyant dress codes were normal, but by the 1980s that style of dress was unheard of. That’s why the Buffalo movement radicalised youth culture and fashion in the 1980s. It’s easy to see why people nowadays are striving to create a fantasy world with their clothing—they don’t want homogeny. At OSMAN, you don’t get homogeny: it’s bursting with fresh, new ideas, or interesting turns on old tales.

Returning to the 19th century, the collection exploded with colour, texture and silhouettes. From 19th-century-inspired shirting and cropped trousers to lavish furs and intricately-detailed laces to electric blue and fiery red, we almost reached sensory overload. Thankfully, for every daring number, Osman grounded things with a tonal piece, which exemplified his effortless commerciality.

The menswear in the collection excelled. Given it’s a burgeoning operation there were only a few looks but it’s quality over quantity. There was a white shirt with a bib-like collar and swishy white trousers; a black jacquard suit with embossed details; a boldly floral-printed tuxedo with a white shirt and a black pussy-bow (to align itself with the current trends, the stylist eschewed from using socks); finally a printed red coat with a large purple lapel.


This Osman collection was dangerously close to being an overkill. As with many other collections these days, there was quite a lot to process and decode in a short period of time. But, the individual strength of each look contributed to the collection being impactful on the whole. What remains to be seen is if this celebration of flamboyant individuality pervades society.
Posted by Paulidoodles at 11:00 AM