For more than twenty seasons Alber Elbaz plunged his audience into darkness at Lanvin. The models were illuminated by dim lighting. It was a distinct, memorable feature to each Lanvin show and it instilled a sensual, intimate mood, every time. Spring 2016 intertwined his three design processes: suiting, emerald tones and print. The first half of the collection was punctuated by models dressed in sharply tailored garments, slightly flirty and totally functional; when it progressed hues in ruby, topaz, amethyst, onyx, emerald, sapphire, diamond; the latter third was defined by the bubbly prints it consisted of. That collection in particular was especially lauded by critics. It was a collection where Elbaz compiled what he does best and built on it.

When news broke in October 2015 that Elbaz had been ousted from the company by the majority shareholder, Shaw-Lan Wang, a Taiwanese publishing giant, the immediate feeling was despair. The fashion world had to bereave the loss of a designer who was a perfect fit for the house he was at; one he transformed from a dormant, dusty label into a marvellous business.

Regardless of the split’s acrimony, the house selected a brilliant successor: Bouchra Jarrar. Perhaps one of the most underrated Parisian designers, couturier Jarrar will massively appeal to the female customers of Lanvin. Her arrival is predicted to have the same effect as Phoebe Philo at Céline—a woman quietly reevaluating a house to cater to the needs of the modern woman. 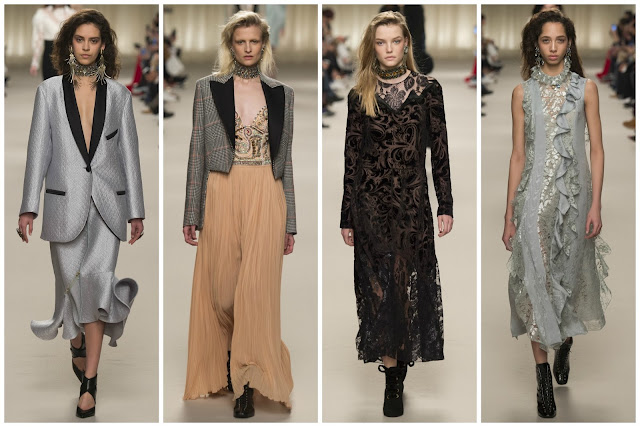 In the interim between the Elbaz’s exit and Jarrar’s arrival, the in-house design team, led by Chemena Kamali and Lucio Finale, were challenged with designing the Fall 2016 womenswear collection. “Challenged” is the operative word there because it is virtuality unimaginable to think that a label piloted by the design studio can bounce back quickly in the wake of a creative director’s exit. Lanvin hasn’t been the resilient beacon of hope to light the way for other creative director-less houses. In actuality it’s just muddled the narrative, damaged the business’ credibility and created a peculiar extension of the brand that will probably be glossed over on the arrival of a new captain.


The collection was an agglomeration of the 50s and 80s. From rockabilly stylings to 80s brocades. Peppered throughout were flashings of lamé, check and lace—the overall collection viewed through a sepia tint. I could expand on this but there isn’t much point, to be cynical about it. This collection has veered Lanvin in an entirely wrong direction. The clothes didn’t feature any of Elbaz’s signatures. An ode to his suiting virtuosity was weak, the colours were significantly un-Lanvin and the fabrication wasn’t spectacular. In short: this wasn’t Lanvin. Topping this all off, the show was held in a brightly lit show space, with full, unadjusted visibility. And it’s when the lights turn on that’s when you can see all the cracks and the underbelly of a brand.