In September 2015 Sébastien Meyer and Arnaud Vaillant were tasked with the revival of Courrèges. The French duo put their successful label Coperni Femme—which won the ANDAM First Collection Prize and was shortlisted for the prestigious LVMH Prize—on hold to solely focus on their new role. The objective of their turn as Courrèges co-creative directors is to make things “desirable and cool”. Undoubtedly, they’ve done just that. With leather jackets, bodysuits, boots and mini dresses, the duo have reinterpreted founder Andrés Courrèges signatures through a modern lens.

It was modernity that underlined Courrèges career. The 60s fashion era was punctuated by many revelatory discoveries. Mary Quant, or Courrèges, depending on your source, created the mini skirt; Courrèges pioneered the bodystocking and the go-go boot; Yves Saint Laurent impacted fashion with Le Smoking tuxedo. Nowadays there aren’t many introductions to new ideas due to fashion’s unoriginality. However, it’s how you retell the story is what makes fashion so effective.

Meyer and Vaillant, as aforementioned, are creating a festival of twenty or so key items to build a wardrobe for the modern, cool woman. Their collection opened with sporty, skintight bodysuits—the founder championed sports luxe in his time. With a keyhole cutout, red, white or black stripes, the piece is an adult onesie that’s appropriate to wear to the shops with a leather jacket. On that front, the duo had you covered too. Sheeny, cropped leather jackets in black, blue or red. There were sumptuously tailored day coats and winter coats too. Elsewhere in the collection, there was a few miniskirts popularised in the 60s.

For their first presentation Meyer and Vaillant introduced the looks. This luxury is only awarded at pre-collection or intimate presentations. They did away with that for fall and the magic was lost. The clothes didn’t have the same personality or thought as the season previous; it was cold and unmoving—just a load of unnecessary stuff. Where this collection could’ve excelled is refinement. Instead of showing 58 looks with many repeats, it could’ve been whittled down to one of each. Not only would this have been a better portrayal of skill, it would’ve prevented boredom.


The Courrèges revival has been commercially successful. The fashion press has warmed to it. Most magazine have done expansive features on the label’s reincarnation or on the designers behind the operation. The presentation format needs to be requestioned. For the pre-collection the designers had the opportunity to talk press and buyers through the collection but the clothes were suspended in midair, museum style. For the main event there were too many clothes. Perhaps a film or static presentation would be more effective. Food for thought. 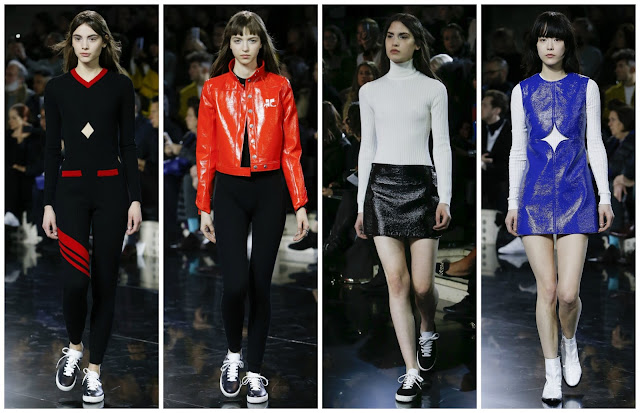