Presenting at the Tate Britain is a tremendous honour for any designer. Molly Goddard, as part of NEWGEN, was given the opportunity this season to forego the ICA in favour of the Duveen Galleries. What’s even better about the pairing is the symbiosis between the collection and the setting it’s in. Molly was inspired by watching old YouTube videos of Thierry Mugler, and early Galliano, for Christian Dior, couture shows. The extravagance, ebullience, extremeness of couture shows has been, from the start, something that Molly encompasses in her work. Her frothy tulle dresses that propelled her to stardom at London Fashion Week are couture-worthy in their rich craftsmanship and floating airiness.

Instead of becoming a broken record, like many London designers risk becoming, treading dangerous waters with the rehashing of ideas, Molly makes further attempts to distance herself ever-so-slightly from her signature. Burnt orange taffeta was the starting point for the collection. It appeared in the form of a calf-grazing smock dress with ballooned sleeves, and in a flared skirt. There was a subtle, subdued hue of sky blue in a taffeta empire-waist dress that boasted white tulle lining that was an anti-prom attendees dream dress.

Dream dresses are Molly’s speciality. Her tulle numbers may cost a small fortune, but be sure they’ll last you years and years. To add to your collection of Molly, there’s the anti-wedding gown. A layered fiasco of black tulle with sheer yolk, styled with ballet flats. Conversely, for the princess option: a tender, cloud of pale pink tulle was suspended from the model’s body—she was a vision from an 18th century painting. In a stylistic experiment, a strip of blue velvet fastened a beige and grey dress. The grosgrain straps that were tied at the shoulders evoked the spirit of couture collections in years gone by. With the addition of tulle stockings and high heels, the model epitomised true, unconventional glamour. The flats in the collection marked Molly’s penchant for functionality and practicality.


Functionality and practicality are the least expected qualities from a plume of tendril-light tulle. But that’s where Molly excels. You can wear this ready-to-wear/couture hybrid to the shops. (Tina Leung did so with jeans, last weekend). This collection was aided by the new additions, experiments. The smocked taffeta, printed velvet assisted the vibe of old-world glamour that imbued this collection. Regardless of this, it would be impossible to render Molly’s tulle as tired. It’s quite the contrary—it’s vital, exciting and she’s designing for women who want to feel like a million bucks. And luckily for them, it doesn’t even cost that much! 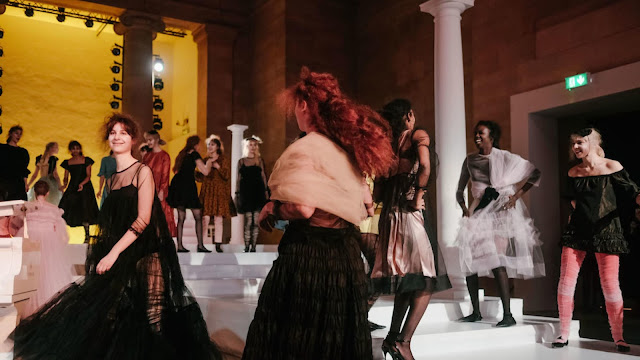