David Koma now designs four ready-to-wear collections. Two for his eponymous label, two for Mugler—not to mention the pre-collections. The Georgian-born, London-based creative has long been one of my many favourites on the London calendar. I have been an ardent supporter of his work for years, but this season he had the slight misfortune of being positioned straight after Mary Katrantzou show on the fashion week schedule. The snail-paced traffic that prevented many from attending the show didn’t stop the exhilaration inside Brewer Street Car Park.

A few seasons back, Koma was inspired by cars—their sinuous curves, contours represented in a well-tailored array of cocktail-wear. I can’t help but draw the comparisons between his work and cars. Attention the minute details enhance his work, highlighting intricacies as working, important facets to the final piece of work. There’s his use of the line, the way it traces the bodies curves, the way it exposes erogenous zones, enhances—and showcases—features. Moreover, there’s speed—how the models powerfully strut down the runway, a mad dash. Watching the force, elegance of an advertisement for a new car as it speedily, smoothly patrols a windy road, with verdant forestry, the same energy and excitedness is built up over the course of a Koma show. 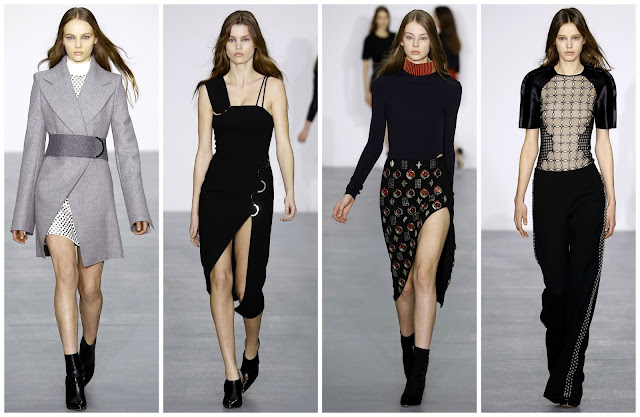 However, it wasn’t cars, as with seasons previous, that inspired him. It was the brutalist sculptures of Frank Cota. The line and the curving line are intrinsic to Cota’s work in the same way they are to Koma’s. Asymmetrical skirting, and the harshness of the cut paid homage to Cota’s work. The silver medallions that were embroidered to skirts, dresses resembled the pieces that envelop others in Cota’s most famous sculptures. The roundness, and the piecing of many parts together. In many ways, cars are easily comparable to art. Don’t tell any art enthusiast I professed that, they’d probably have a fit.


Self-confidence is attributable to Koma’s work and that’s a factor as to why it’s so irresistible. London is blessed with self-assuredness, despite it’s affinity for cocktail-wear, especially in the form of David Koma. He can keep his foot on the accelerator, because this thrill ride doesn’t show signs of slowing down anytime soon.
Posted by Paulidoodles at 6:00 AM