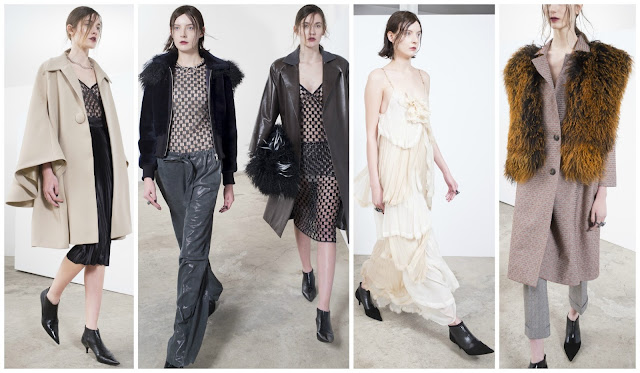 It’s always amusing—sometimes humourous—reading a designer’s Wikipedia page. Generally, it’s full of information that has definitely been filed by someone outside the fashion industry. You can generally tell through the wording. Mislabeling a designer’s aesthetic is commonplace. Combing through Northern Irish designer Sharon Wauchob’s page and you’ll find that she apparently “specialises in ‘alternative’ fashion.” Massive eye-rolling ensues. Designers are often done an injustice regarding the way their designs are interpreted. Personally, I’d describe Wauchob as a sharply focused designer with thoughtfulness, and an eye for surface detail.

Wauchob’s skills were honed in when she went to Paris, after completing her degree at Central Saint Martins. She worked at Louis Vuitton, and never severed ties with LVMH; she served as creative director for Ali Hewson and Bono’s label Edun for a number of seasons. Koji Tatsuno was also instrumental in her learning and development as a designer. As with Phoebe English yesterday, Japanese influences pervade Wauchob’s work. Elegant drapery, experimentalism push through. This September, Wauchob is hoping to join the British Fashion Council’s official programming for London Fashion Week. Showing her last presentation during Paris Fashion Week in February, her fall 2016 showing was a bittersweet goodbye to the city that housed her creativity over the past decade.

Paris’s presence was felt in the graceful effortlessness of the collection. The lookbook imagery featured a model, as she casually strides across Wauchob’s Marais studio. Wearing loose slip dresses, faux-fur filets, embroidered wool jackets, delicate evening dresses and lovely suiting. The film Midnight in Paris sprung to mind. Woody Allen’s dreamy portrayal of the City of Light sees Owen Wilson’s character meet Zelda Fitzgerald, Josephine Baker, and Alice B. Tolkas. This collection felt like a modern day incarnation of those three creatives. Like a film, like the above three’s work, the collection was highly emotive. It contained narrative—something that noticeably lacks from collections these days. You could visualise the woman going to work, going to an event, travelling, carrying out her daily life.

Sharon Wauchob’s aesthetic isn’t “alternative”, as Wikipedia may have you believe. Instead, it could be either labelled “realist” or “subverted Japanese minimalism, told through a Northern Irish lens”, which reverts back to the statement of realism. A collection like this won’t let you forget that.
Posted by Paulidoodles at 6:00 AM