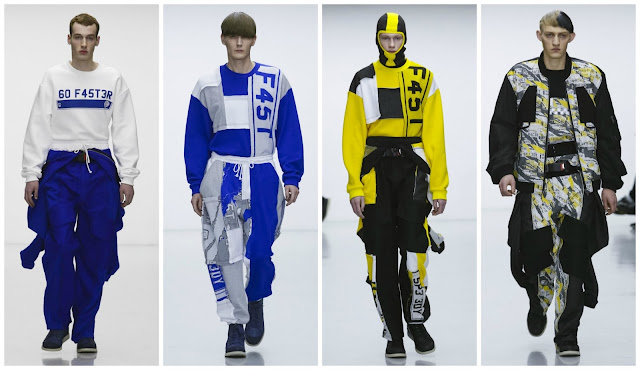 Sometimes, with or without intention, a designer evokes an image larger than the one that they set out to. Liam Hodges was looking at petrol-heads - car obsessives - for his fall 2016 menswear collection and the opening look emitted a prescient image. ’60 F46T3R’ —‘Go Faster’ as a number plate—was emblazoned in cobalt blue against a white sweater. It was meant represent the licence plate of a petrol-head and how they wear it like a badge of honour. The slouchy, opened boiler suit was the uniform they wear to work, strenuously, on their prized possession. But musing on the symbol of ‘going faster’ made you think: the fashion industry is becoming fast fashion, the very thing that makes them squirm and constantly works against them. Bigger labels like Burberry, Tom Ford and Vetements are switching their seasonal scheduling to present the customer with in-season product, but also to combat fast fashion. In doing so, to compete with fast fashion they become fast fashion. It’s thrashing the mindset of young designers, like Liam, who are simply not able to meet this unnecessary requirement.

Young designers, emerging labels drop like flies. Over the past year, fashion has had to mourn the loss of Jonathan Saunders, Marios Schwab, Richard Nicoll—a triumvirate of talented men. It’s highly problematic. Besides being afflicted with preset industry notions, there’s thankfully a sense of fearlessness with young designers. Take Liam for example; you could compare him to a petrol-head because he is unashamedly proud of his craft. He’s creating things that people want to wear—his customer base is the north London skateboarder, the east London hipster, or even the lad that works expeditiously on making his older, used sports-car look the best it can be.

Printed on boiler suits, baggy trousers, bomber jackets was wrenches, spanners, oil stains—essentially the apparatus for a budding mechanic. Neon yellow was splashed across a pair of black trousers in an interesting turn of events. Yellow punctuated the latter half of the collection—in abstract prints, which upon close inspection revealed themselves to be number plates.

Though he didn’t veer to far into race car driving territory, two looks featured balaclavas attached to sweaters. After all, race car driving increases the speed, and the pace at which Liam Hodges is progressing his label is just perfect.

Photo Credit: showstudio.com
Posted by Paulidoodles at 6:00 AM