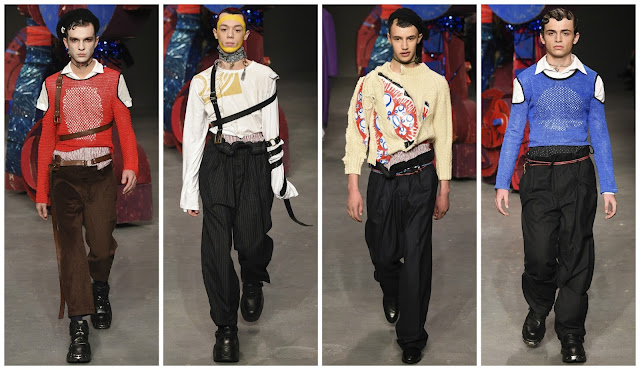 They call him Loverboy.

Charles Jeffrey was born in 1990 in Scotland. He graduated Central Saint Martins with a BA and MA in menswear. Earlier this year he presented his first collection as part of Fashion East’s MAN line-up, alongside Wales Bonner and Rory Parnell-Mooney. When you look at how wildly different the MAN line-up is, you’re struck with this overwhelming sense of pride in London’s menswear landscape. No longer is it limited to the banker buying a neatly tailored suit; designers like Charles Jeffrey cater to the club kid, Wales Bonner to a man who is not afraid to embrace femininity, Parnell-Mooney is a gothic merge between the two, in a slightly serious manner with a heavy focus on tactility.

The club kid in question is Jeffrey himself, and his circle. He formed a monthly club night called LOVERBOY, at Vogue Fabrics in Dalston. It began as “an environment where people could express themselves”; It paid for his masters collection. Studying the revellers that attend the club night is the basis for Jeffrey’s collections. If you cast a glance upon the attendees of LOVERBOY and take a look at the men cast in this show, you’ll immediately witness some similarities.

Showing last at MAN, the show space was plunged into darkness for a brief period before a Gary Card sculpture was exposed mid-runway. The unstable structure, in blue, pink and red was an added touch that enhanced Jeffrey’s presentation—though I’m not sure how it contributed to it. The first model emerged with a powdered face, waxed hair, a bolero. His ensemble consisted of brown cropped trousers, a striped shirt and a shredded sweatshirt. Then came models with more powdered faces, heavy make-up. They all wore stompers. Pinstripe suiting, proportionally-challenging garments, baggy trousers, dresses, and a savagely slashed jumper.

Charles Jeffrey, like his MAN cohorts, has a clear aesthetic. He speaks to the club kid, who unabashedly presents you with a vivid image of character, joie de vivre. The menswear market isn’t crowded and there is a market for clothing that is wilder, more daring. I’m excited to see where Jeffrey takes us next. Hopefully it gets weirder and more wonderful; but an ounce of refinement wouldn’t go amiss.
Posted by Paulidoodles at 6:00 AM