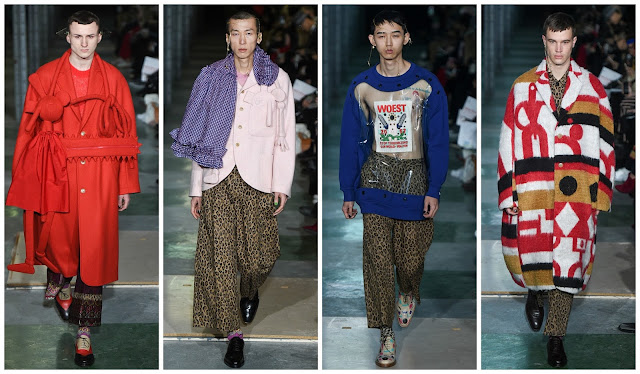 The Antwerp Six is comprised of six names that revolutionised fashion in the 1980s, with their Belgian instinct and thought provoking ideas. There’s Dirk van Saene, Dirk Bikkembergs, Ann Demeulemeester, Marina Yae, Dries van Noten and Walter van Beirendonck. Personally, I’m not familiar with them all, but I am familiar with the history surrounding the names. Walter van Beirendonck has not only built a career as a great menswear designer but he also heads the fashion department at the Royal Academy Antwerp—where he incidentally graduated from in 1980. During Paris Fashion Week in January, van Beirendonck presented his fall 2016 menswear collection. The collection was called “WOEST”, a word with a Flemish translation of “furious,” which is apt given van Beirendonck’s current state of mind. “I am really angry,” he told Alexander Fury in January.

One of the strongest emotions, anger transformed itself into a collection that reflected the current state of the world. “Anger.” Since fashion last reflected terrorism in the world around us, there have been many more horrific attacks globally. Turkey, Iraq, and van Beirendonck’s place de naissance, Belgium, have all been targeted by terrorists. “Stop Terrorising Our World” read one grommeted sweater with a PVC body. It’s a motif that carried through from the last season, where a PVC tank top had the same sloganeering.

Elsewhere, anger could also be felt; in the colour palette (livid crimson and gloomy blacks); in the cut of the clothing—an abstracted red coat featured a belt with jaggedly cut edges. Animalistic savagery was present in the leopard prints used.

van Beirendonck’s affinity for the abstract stretched further than an unexpected use of leopard print. The cocoon-like shapes and oversized cuts instigated a vibe of protectiveness. More and more, clothing is becoming a shield from the outside world, a self-expressive armour from the naysayers. Whoever has the chutzpah to don leopard trousers, geometrically printed joggers,  or a pink top/dress with green polka dots, could carry it off with gusto. It was in the peculiar pieces that shied away from anger you could feel a pleasantly relaxed beauty.

With fury, there comes potential for oneself to become caught up in the anger—to be bogged down by the world around us. Walter van Beirendonck issued his feelings about the world in the only way he knew how: through fashion. If the mission was to highlight the anger that boils inside ourselves, the anger we fail to express, this collection hit the nail on its head. The world isn’t a Dolce & Gabbana fairy princess land, the world isn’t an idealistic zone— it’s not dissimilar to the reality Walter van Beirendonck portrayed it to be in this menswear collection.
Posted by Paulidoodles at 6:00 AM