The Vetements Effect: I Don't Get It Either 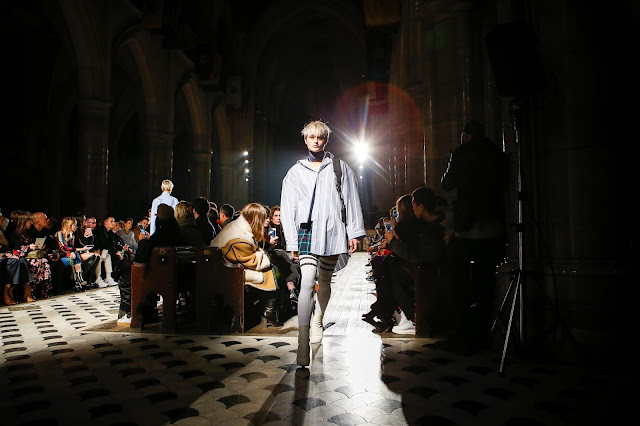 Comedy intersecting fashion was a format explored by E! Entertainment back in 2010. The late, great Joan Rivers was at the helm of the outrageously funny panel discussions. In 2016, there’s Man Repeller, founded by Leandra Medine who also injects her acerbic wit into her work. Man Repeller—a term coined in April 2010—offers insight into the fashion industry without taking things or itself too seriously. I’m a huge fan of Leandra’s writing and recently she published a story which made me sigh with relief. “Confession: I Don’t Get Vetements” the title reads. The piece pertains to the brand Vetements, who’s meteoric rise has been a widely documented success story. Leandra rightfully dubs the brand as a “fashion phenomenon.” That’s all it can be described as. There was a presentation, an intimate catwalk presentation and boom… they were dubbed by many media outlets as “the most exciting thing to happen to fashion since Ghesquière for Balenciaga, or Martin Margiela’s Margiela.” Fashion does love hyperbole.

Is it worth the hype? No, in my opinion, certainly not. ‘Vetements’ is the French word meaning clothes. Designed by a collective of nameless designers (save for frontman Demna Gvasalia, and his brother—the business guy—Guram) hailing from large conglomerates such as Céline, Balenciaga and Givenchy. Demna Gvasalia worked for Maison Margiela and Louis Vuitton, before branching out to pursue his own label with his group of friends. Frustrations with the state of the industry led to the birth of Vetements, but you’re probably bored of hearing all that regurgitated by every fashion media outlet. Ironically, in trying to escape “the system” and existing in their own bubble, the fashion industry has managed to penetrate that bubble and lure them back into the limelight. An intended anti-establishment movement, Vetements has become part of the establishment. What do they offer? Clothes, not fashion; however, some of it appears as fashion. They reflect society with subtle political statements: genderless dressing, whitewashed casting (something that is defended by the Gvasalia, who says that it reflects their group of friends). Where the clothes element overbears the fashion aspect to the label is in its self-professed vision and output. Leandra uses Sex and the City and Girls to aptly describe where Vetements sits. Sex and the City is fantasy New York; Girls is real (most of the time) New York. Vetements is Girls. It could be summed up as gritty and real, but where is the fantasy element? Fashion is a medium that allows you to become whoever you want to be—whether that’s in a €50,000 Chanel haute couture boucle skirt suit, a €13,000 Oscar de la Renta gown, or a €2,000 Gucci dress. “But to wear clothes that make you feel like your about to wash dishes?” Leandra questioned, rhetorically. They’re extortionately priced, but competitive in terms of the market. 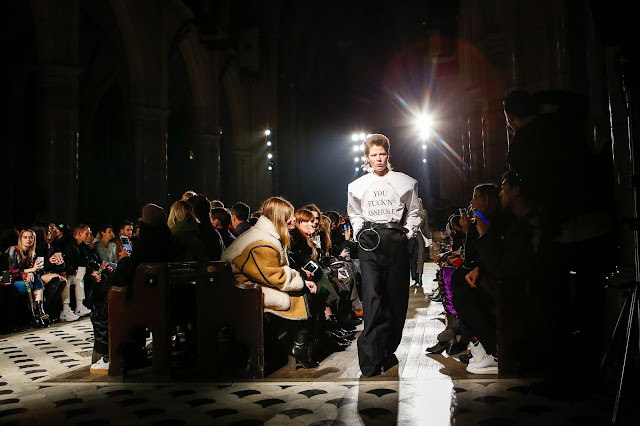 They say to justify a large spend you need to think “a price per wear”. 1000+ wears of jeans and hoodies before you get value for money. Sure, you can get value for money out of those basic pieces, but why not invest in something like The Row. They offer a wide range of—better made—basics. Those seem worth spending on. I remember vaguely an interview Gvasalia gave, where he highlighted the impracticality of his own work despite it’s aesthetically pleasingness. The story went that a female friend was wearing a top with overlong sleeves; virtually unable to hold her own drink, she knocked over many others’ in her wake. €1000+ well spent?

Casting a glance at their unimpressive fall 2016 collection would reveal that the tight knit group are focusing on producing even more saleable clothing with some subtext. Stylist and friend Lotta Volkova opened the show in a ruffled school girls outfit of sorts, carrying a bunch of yellow flowers. The looks following heightened the school girl atmosphere, although the collection was hosted in a church. A form of penance, maybe? There were anarchically short skirts, plaid blazers inherited from older sisters and brothers. The same could be said for oversized shirts which were oversized, unbuttoned, and half-tucked in. Tartan skirts, mini and knife pleated hit the runway prior to a jarring statement etched on one white sweater. “You Fuck’n Asshole” it read in large capital letters, imbuing a message of anarchy and the inability to tame the Vetements person. More sloganeering referenced youth culture and would appeal to some (excuse the horrible word) millennials and those with an affinity for celebrity culture. “May the Bridges I Burn Light the Way”—it is of course quoting Dylan McKay from the 90s classic Beverly Hills 90210. (Gvasalia did say he was in a bad place at the time of making this collection, hence the setting and the angry slogan branded on a hoodie that’s like to sell thousands of units). NSYNC* alumnus Justin Timberlake also received a shoutout: “justin 4 ever” was printed on a hoodie. Street style bait galore in this collection, but there was also some nice pieces such as the school uniforms pieces. Wholly it was a weirdly combined collection that lacked oomph and substance. 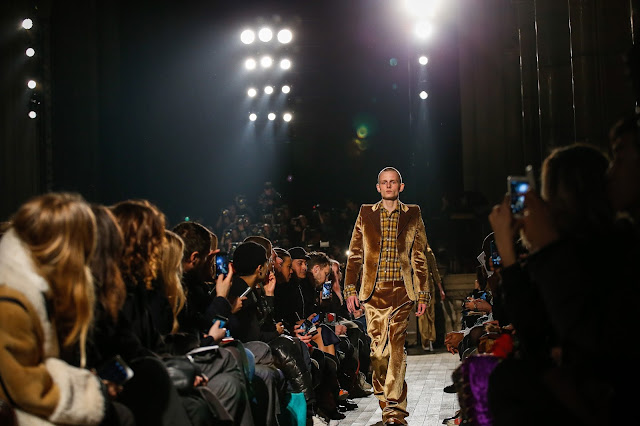 Yet, the world is mad for a piece of Vetements. Kering appointed Demna Gvasalia as creative director of Balenciaga, a successor to Alexander Wang. They got Kanye and Jared Leto to a dingy gay sex club in Paris, and then Kanye and Travi$ Scott rocked up to a far-out Chinese restaurant in the 11th arrondissement, before showing in a church this season past. Even Anna Wintour is a supporter. A picture surfaced online of her in conversation with West and Gvasalia. They have 84 stockists worldwide. In recent months, Garage magazine profiled the designer; Pop magazine featured an expansive interview, as did the special edition Business of Fashion publication. The industry’s smitten and then there’s the rest of us—the nonbelievers. Is fashion just latching onto newness, or am I too missing out on something? 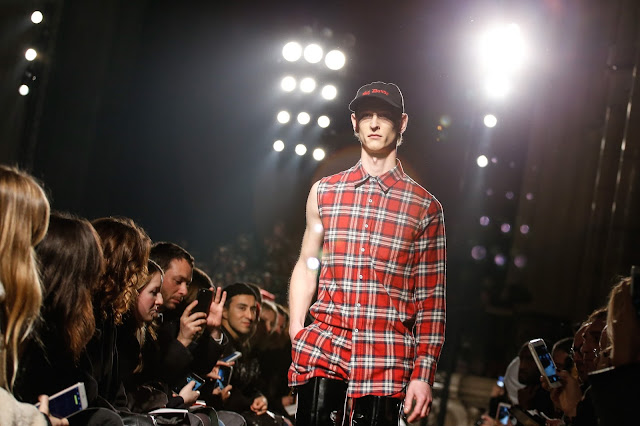 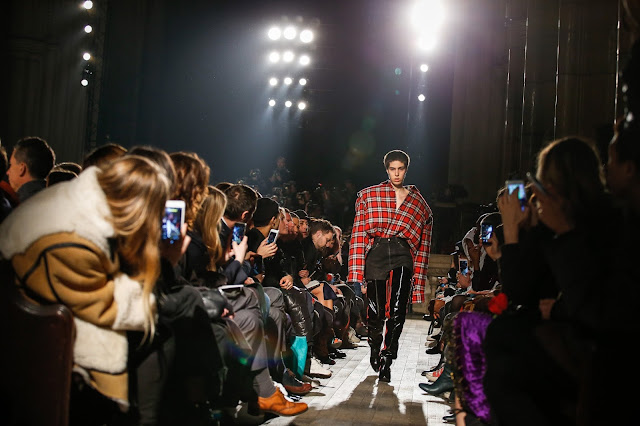 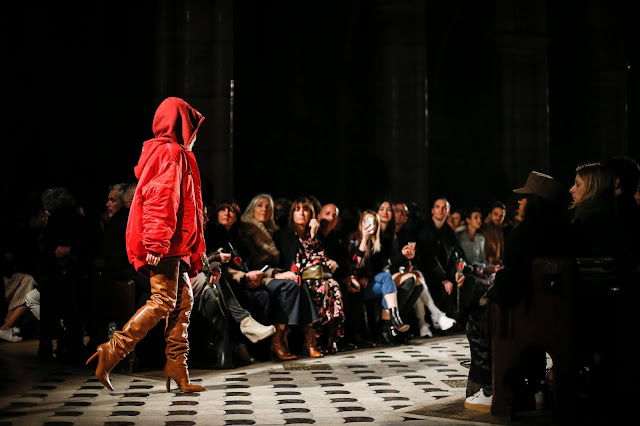 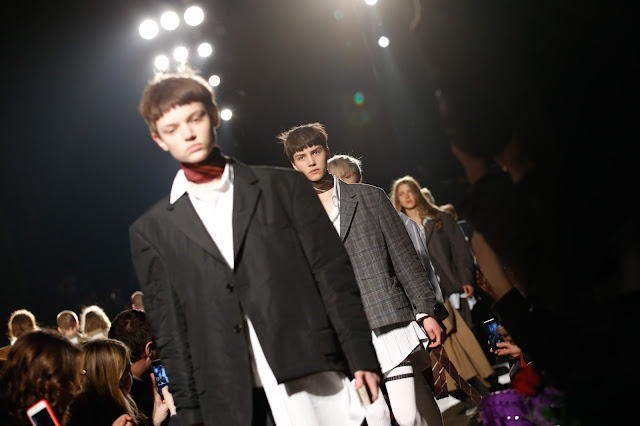