It was announced by the Business of Fashion today, exclusively, that Francisco Costa and Italo Zucchelli would be exiting their respective positions at Calvin Klein. There’ll be no menswear or womenswear shows in June and September, just intimate presentations for press and buyers. It’s April and there has already been so many shifts and changes in the fashion industry that you can’t help but be exhausted by the constancy of it all. This also fuels the fire about the “broken system” discussion—which is probably insolvable. With departures, come arrivals; Belgian designer Raf Simons is predicted to succeed. Could this lead to another unhappy ending, whereby Simons leaves the third large conglomerate of his career? If anything, he should continue to focus on his menswear operation, which he purposely keeps relatively small so not to make a massive, uncooperative business, that has to succumb to the pressures of the unrelenting fashion “system.”

I’m not too familiar with Simons’ menswear, ashamedly, but I did find this collection to be particularly strong and an indication that previous offerings are up to this—if not higher—standard. The show notes featured a litany of Raf-isms which he imbued into the collection in some shape or form. Angelo Badalmenti, David Lynch, Maison Margiela, Cindy Sherman. Four talented artists who leave their mark on the world, in their respective fields, uniquely. Badalmenti scores Lynch’s surrealist films; Margiela is famed for being one of fashions most elusive entities and revered designers; Sherman’s unparalleled, conceptual artwork is forever an important art history timestamp. Those four creatives set the tone for the collection: subverted reverence—breaking the rules and thinking outside the box. There was your meat and potatoes: coats, black trousers, sweaters, blazers. Not without a twist. Simons played with proportion—enlarging, shortening, ripping and fraying different garments. “Destroyed Letterman” sweaters were oversized and torn. They were street style bait of the highest order, but undoubtedly cool. 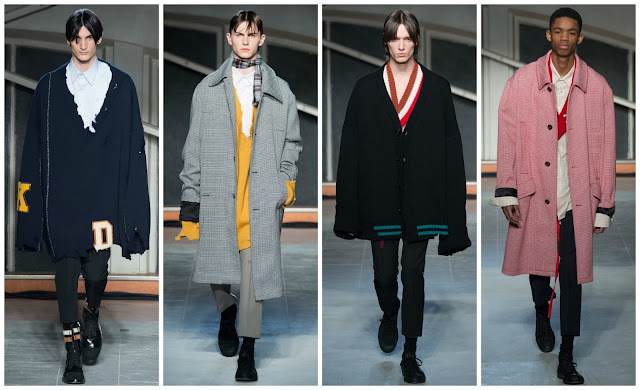 David Lynch’s Twin Peaks instilled an eery vibe. Models sauntered around the labyrinthine pathways, brushing against guests in cramped spaces, their footsteps audible upon approach. The Black and White Lodges from the show were on the show notes. Raf Simons’s house of horrors didn’t end there. Edvard Munch’s The Scream painting, Wes Craven’s horror tetralogy Scream (the original the intended reference),Halloween and Elm Street all made appearances. A clear fascination with the horror genre. His models were cross between a jock or outcast in a grownup setting.

Cool is a word I used earlier in this dissection. It’s not uncommon, but it’s often incorrectly applied to certain collections in the fashion industry. There’s no denying that Simons is the king of cool. From Sterling Ruby to Adidas collaborations, the Belgian understands youth culture but puts his own spin on things. This collection wasn’t out of the ordinary, but it boasted coolness from top to toe. And in 2016, when brands are depending on social media moments, Raf Simons beats them all with a good ol’ lesson on pushing a genuinely cool output.