Virgil Abloh is the kind of polymath I appreciate. He’s an architect, DJ, graphic designer, stylist, creative director and consigliere to Kanye West, aspiring furniture designer, fashion designer. (Needn’t I mention the undergrad degree in civil engineering or the masters in architecture). His label Off-White has been generating traction from the fashion press over the past few seasons. Initially, he launched as a menswear brand which landed him an LVMH Prize nomination. Of recent, he has cultivated a successful womenswear counterpart, his second on-schedule presentation taking place during Paris Fashion Week in March. His menswear collection debuted its first runway show during men’s fashion week in Paris back in January. An impressive lineup—Olivier Rousteing watched on, Ian Connor hijacked Abloh’s finale jog.

“Don’t Cut Me Off” the collection was called. Designed via group chat, manufactured in Milan and presented in Paris, the collection is the result of Abloh’s worldly view of streetwear, trend observation and noticeable teamwork. His diversely-cast models hit the runway in a variety: there was a suit, styled with trainers, naturally; flannels (similar to the ones he garnered fame and business acumen from—selling screen-printed logo t-shirts and sweaters); leather jackets; hoodies and flyest coats (army camouflage print and burgundy fur-lined hood—I’ll take five).

His trend observation must’ve been influenced by the interview with graphic designer Peter Saville from SHOWstudio (conducted by Lou Stoppard), which intoned a message throughout the collection. His post-punk design aesthetic imbued this collection. Certainly visible on the streets is a post-punk revival, which Abloh cleverly weaved into this collection. Putting a personal spin on things, the looks in this collection had a healthy balance between monochrome and the rainbow-hued looks that trickled out in the latter half of the collection. A businessman or a skateboarder—Abloh is both—could wear these, and that’s one of the most important take aways from this collection. There’s product and there’s the theoretical side of things. The appeal of these clothes to any man, from any walk of life is the theory in this collection. It’s understated cleverness.

To end the show, a flotilla of overcoats in yellow, fuchsia, cornflour blue, pewter and white took the runway—pervading a sense of Abloh’s inclination for the unusual, the unexpected. What a way to end a well-calculated mix of street-ready garb. Don’t cut me off, I'm curious t see more from Virgil Abloh. 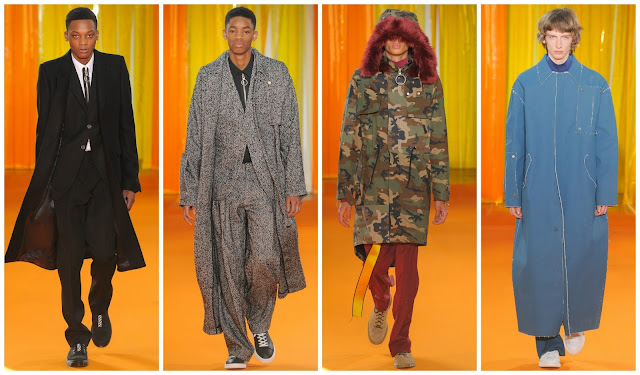