Hedi Slimane’s controversial incarnation of Saint Laurent brand has provoked aggressively, performed overwhelmingly, and regressed entirely. He assumed position as creative director at what was then called Yves Saint Laurent, adding a personal stamp to the historic Parisian house, previously fronted by Stefano Pilati. The stamp: removing ‘Yves’ from the label. This astronomical change sparked outrage in the fashion world. YSL became known as SLP. It could be described as Slimane’s first mistake. In hindsight, it was one of the best decisions ever made by the Kering-parented company. Pilati’s Saint Laurent was sexy with sensual sensibilities, a woman in her late thirties; conversely, Slimane’s was the youth-crazed, dingy basement-dwelling rock chick. From a runway point of view, Pilati’s surpassed it exceedingly. Commercially, Slimane prevailed. The more streamlined approach to selling has benefited the label tremendously. Sales continually rise.

It’s his commercial output that puts the label into a predicament. Against a blank screen, Saint Laurent’s consumer bait looks great, both menswear and womenswear. Everything, however, whether new or otherwise, looks derivative of his existent body of work for the label and of the high street labels that continue to blatantly copy his aesthetic. Walk into any store along the high street—into the men’s section especially—and you’re guaranteed to see virtually precise copycat items for a fraction of the prize. Slimane continues to push the same aesthetic, unrelentingly. The woman’s section on the high street are served up similar garments and a select few from the womenswear collection. More palatable to the layman, it’s unsurprising to see menswear emulated into womenswear in this division. His youth-crazy design vision has been exhausted, yet it is still attractive. Despite the banality of it all, he’s doing something right. On the runway, it is a different story. Slimane’s blissfully ignorant, wildly inaccurate portrayal of women and men can only be described as a designer committing a ludicrous disservice to a generation.

For Fall 2016, the collection presented was an exclusive, intimate affair. At 24 Rue de l’Université, the Hôtel de Sénecterre—the refurbishment of the Left Bank building has been overseen by Slimane for the past few years—housed about 150 special guests. “La Collection de Paris” it was entitled. An ode to the city where he was defined by his success at Dior, and once again by Saint Laurent. Each attendee had their name engraved into a typical couture salon chair. It was announced via email prior to the show that the audience would be viewing a couture collection, created in the refurbished salons. Pierre Bergé, life and business partner of the late Yves, and co-founder of the YSL couture house, took his front row perch alongside the original Saint Laurent muse Betty Catroux. The show began with Bénédicte Ginestous’s voice intoning the numbers 1 through 42, as each model descended the dramatic staircase at a painstakingly slow pace. 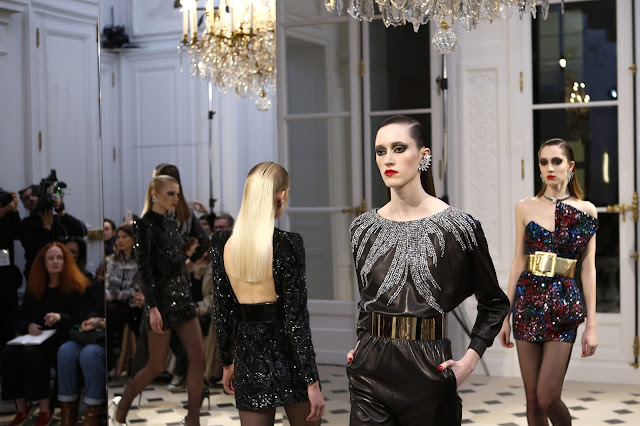 Credit where credit is due: there were some beautiful clothes here. A modern riff on the iconic Le Smoking tuxedo opened the show. The trousers were high waisted and belted, the blouse had polka dots and featured an obnoxiously large frilled collar. With slicked back hair, a stained red lip and an ear cuff, all the model was short of was a cigarette effortlessly placed between her index and middle finger. An intricately embroidered gold mini dress, an imposing cobalt blue fur coat with exaggerated shoulders, an off the shoulder dress in black, a gorgeous evening gown with a flowing train were among highlights. Lily Sumner closed the show in a response to Yves Saint Laurent’s iconic emerald green fur coat. The livid red coat, from behind, made the shape of a love heart. The love heart was a red herring though. It would be impossible to apply it to modern woman because the extreme body types presenting the collection don’t represent today’s society. His imprecise portrayal is found to be offensive among certain audiences, who find it unimaginable to get on board with such preposterous concepts of womanhood. There’s also the issue of the whitewashed casting. I’m not accusing Slimane of being the worst offender, but some careful consideration should be taken into account at such a large conglomerate. Slimane’s proved highly influential amongst youngsters. If only we knew how this makes them feel? Some could be smitten, others repulsed.

The love heart in question might symbolise something else. Rumours reverberate in the industry quicker than you can say “fashion”. The rumour churned out ideas that this could be the final chapter in Slimane’s Saint Laurent career. Was it his kiss goodbye to the label? Entering the last week of March, Vanessa Friedman of the New York Times reported on Twitter that we were in the week of the all important announcement. By Friday April 1, the news rolled in a press release from Kering, announcing a discontinuation of Hedi Slimane’s contract with the house. His reign at the house was dubbed by the press release as a “four year mission” and an “undisputed success”. His reformation of the house was also highlighted. 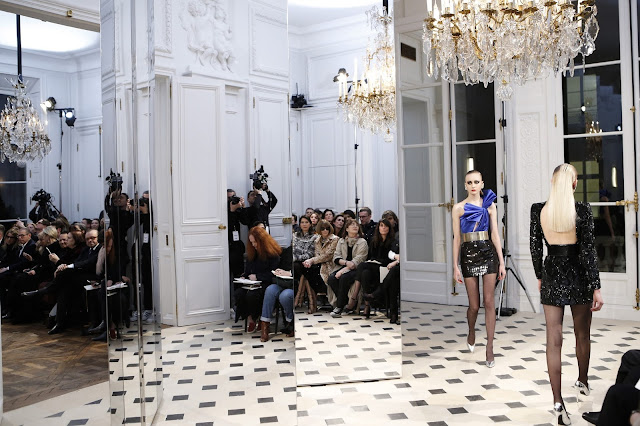 The renovations of the new SLP headquarters would’ve lead you to believe he was here to stay; unless of course, it was to pave the way for his successor. There was the special event in Los Angeles back in February, an off the beaten track (in fashion terms) presentation. The one off show presented at the Hollywood Palladium prior to New York Fashion Week, menswear and womenswear pre-fall was intended to be the beginning of a two part extravaganza for the house. One in Hollywood, one in Paris—a place that Hollywood tries to copy, and where Hollywood is copied. Given the age of the models, a 23-year-old Julia Roberts, starring as a sex worker in Los Angeles, in the 1990 classic Pretty Woman sprung to mind. These clothes would certainly fit in for a night of unadulterated revelry. A plunging neckline, ruffled mini dress or a python print one-shouldered mini are perfect for the queen of the night. People did, in fact, wear dresses that graze the upper thigh. Noticeable in less popular, smaller cities, ritualistic nightlife practices for young woman include finding a standoffishly short mini dress. But that was years ago and this is 2016. Woman dress individualistically, and self-expressively in a conformist manner. Even Anthony Vaccarello has managed to adapt to this aesthetic in inventive ways.

Slimane seems too absorbed in the past. Apt commentary delivered on this collection labeled it a mishmash of his greatest hits at the house, further playing to the idea of those undeniably important rumours. Derivative is the best word to describe the collection. The thing about greatest hits is that designers find a way to interpret them years after their inception. In the case of music, which Slimane is also preoccupied with, there are a few new additions to the lineup of the classics. There were one or two semblances of that here, but overall you didn’t have butterflies in your stomach, indicating something refreshing, exciting and powerful. It was just the sign of another labels couture line stagnating. The shame here was that it had only just begun the label’s foray back into couture.

Swirling rumours of Donatella Versace’s protege Anthiny Vaccarello succeeding Slimane were in fact correct. Kering appointed the French designer yesterday, after an announcement revealed that he was leaving Versus Versace. However, he is left with a massive dent to repair. Hedi Slimane has transformed the company into a billion dollar entity and has merchandised the brand in such a way that it would be difficult to follow if you’re not him. Will aesthetics shift slightly and continue on as the exclusive SLP club, or will a subtlety be returned to the label? Like every other burning question in the fashion industry: time will tell. But in 2016, labels are running out of time. Parent companies need to resolve issues with designers jumping shit after three years. It creates a highly disjointed, systematic failure despite how nice it may look. In all of this, Hedi Slimane moves onto the next stage of his career unscathed. 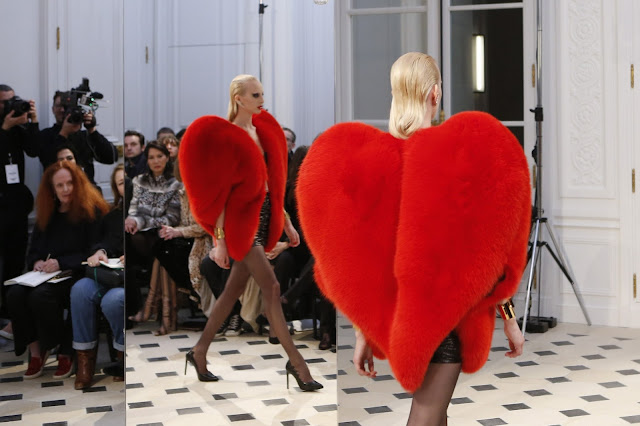