Today, as you may know, is St Patrick's Day here in Ireland. It's never been a truly patriotic day for me. As a child, attending the annual parades, I was dissatisfied and bored by the weak offering of the community. Or, at least that's what my eyes saw as a child (I haven't returned in over 9 years). In most cases, the day is an excuse for youths to get sloppily intoxicated in broad daylight. But given the it's the anniversary of the 1916 Rising in a few weeks, my patriotism is at an all time high. I've been angrily pondering on the flagrant abuse of power on behalf of the British, merely a hundred years ago. If it wasn't for the valiant rebels and there successors, Ireland would be very different today. Diplomatic ties have since been restored and it's something that I am grateful for. Many Irish people find themselves working, living or studying on England soil and vice versa. Particularly, Ireland's cultural exports have found a home and established their names across the pond. Namely in the fashion industry, the likes of Danielle Romeril are prospering. Albeit I'll be ignoring the parades, the leprechaun jokes and the ubiquity of green glitter, I thought I'd share some of the Fall 2016 collections from Irish designers. 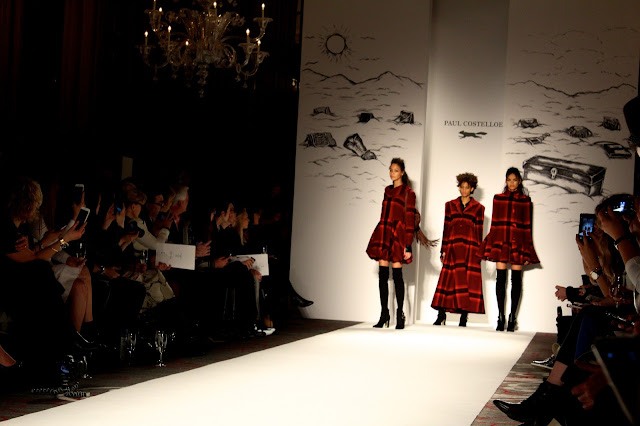 Paul Costelloe is one of Ireland’s most storied designers. He has lines in national retailer Dunnes Stores, designed for Princess Diana, opened London Fashion Week for 6 years, designed British Airways and the Irish Olympic teams uniforms, etc. He’s a household name in Ireland, an honour tricky to posses. After taking a break from the official LFW schedule a few years ago, he returned three seasons ago and his 60s inspired collections have been performing exceptionally well with critics.

His Fall 2016 collection was my first. Ensconced in a ballroom at the Meridien Hotel, the models stormed the catwalk for fourteen straight minutes, usually in groups of three. I wouldn’t have associated the word “sexy” with the Paul Costelloe, but this was that. Off-the-shouldered mini dresses were fastened at the waist with leather corsets; floral printed blouses were in delicate chiffon. The appearance of vulnerability in a collection pertaining to “power dressing” was welcomed. It contrasted well with the leather, fingerless opera gloves, structured coats, baby doll dresses and a slew of evening gowns which consciously played with proportion and volume. Sexiness, vulnerability and elegance mingled to create the “ambitious, fearless” Paul Costelloe woman.

While there were whiffs of Simone Rocha and Alexander McQueen, Costelloe presented his ideas in a way that would be more palatable to a certain group of people, specifically the majority of women in Ireland. Military coats in warm red checks and well-made and printed dresses would appeal to the Irish customer because of their practicality but also because there is a subtle showiness about them.

“I hope this collection conveys my aspirations in moving the Paul Costelloe brand forward, in an exciting and unconventional manner.” Slightly derivative, but he’s on the right track. 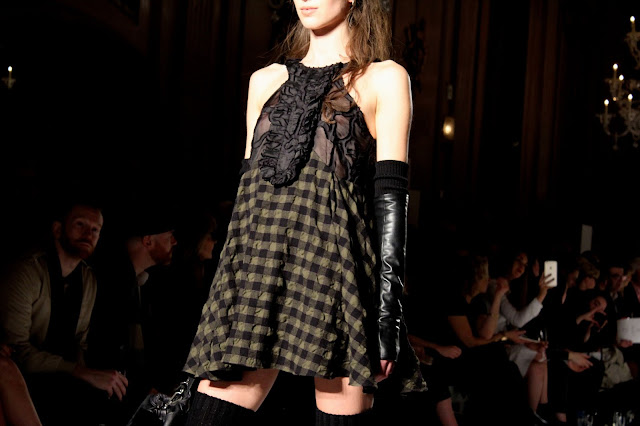 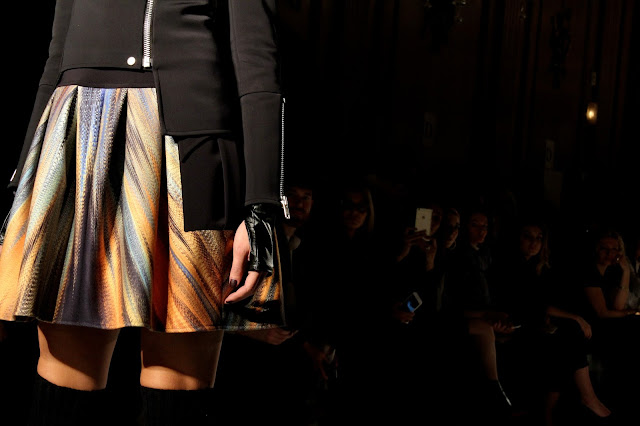 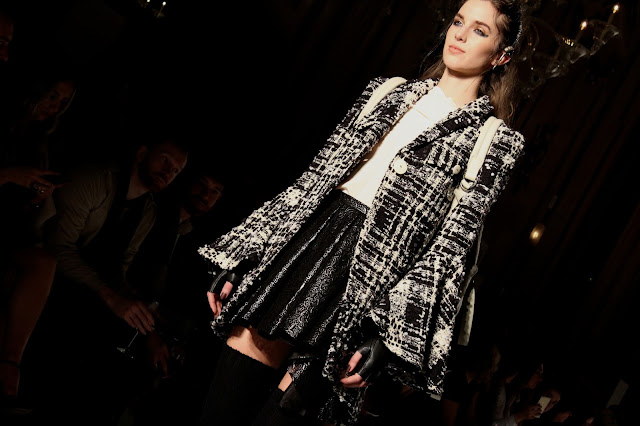 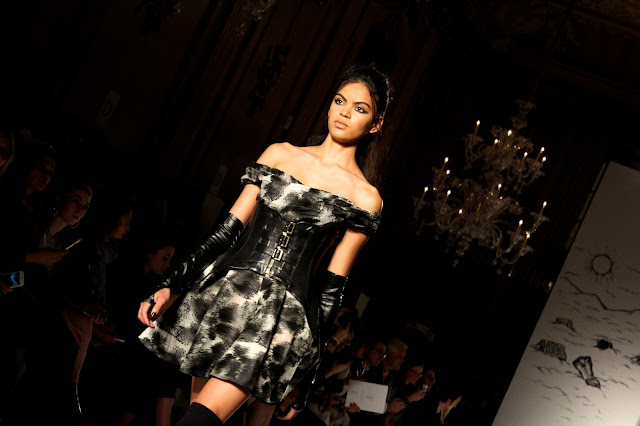 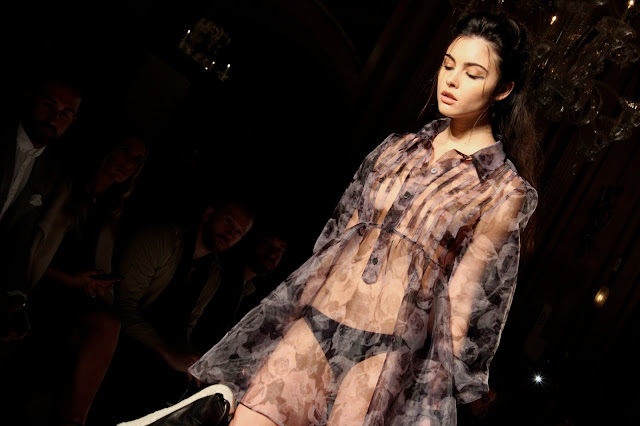 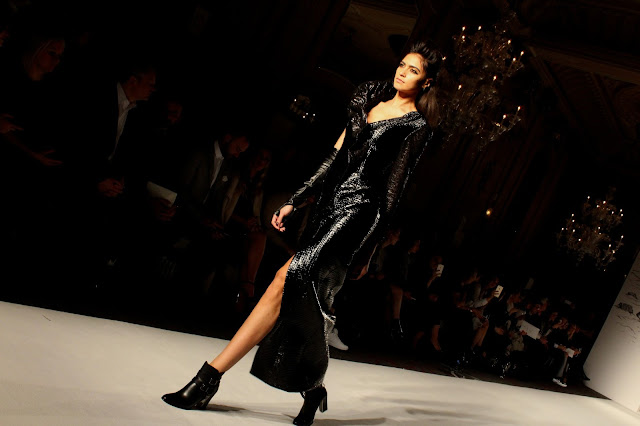 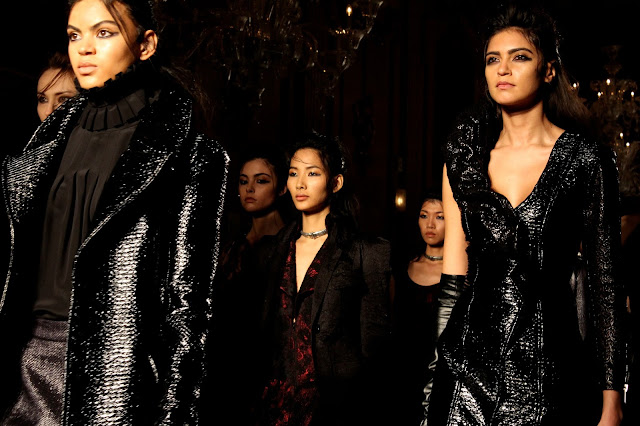 Late Saturday afternoon, after photographing street style outside J.W. Anderson, I made my way to Mary Ward House for the Teatum Jones show. Returning from New York Fashion Week with the International Woolmark Prize in tow—a victory for emerging London designers—the show the Catherine Teatum and Rob Jones put on was every bit celebratory and ebullient as you’d expect. They were inspired this season by Agnes Morrogh-Bernard, an English nun who moved to the west of Ireland and founded the Foxford Woolen Mills in 1892. Forming a workplace community for the surrounding, impoverished towns, Morrogh-Bernard sustainably built a business intersecting political, social and economic growth. Her achievements aside, the duo were mainly inspired by her “fearless and relentless spirit.”

Spirit is an apt word to describe this Teatum Jones. It had a lot of it. The beautiful colour palette was attributed to this spirit. There were fearless primary colours, darker shades and warm autumnal hues. Also, the exercise in fabrication that unfurled exemplified their skill. 95% of the fabrics used are designed and created by them. One knit sweater was styled with green check trousers, and a multicoloured coat sparkling with embellishment. There was a ribbed wool sweater with overlong sleeves—that were stylishly bunched up—and a mirror print skirt with mohair details. The layering of these details synced with the Irish weather, which is unrelenting at the best of times. That doesn’t stop women from dressing up, as seen in sheer dresses, exposed shoulders and a flouncy green number.

Simone Rocha often references Catholicism in her collections; Richard Malone denotes to working class backgrounds. Teatum Jones have delved into human interest stories—one of the many Ireland has to offer. I’d like to see them channel similar stories into powerful, emotional and fearless collections like this one. 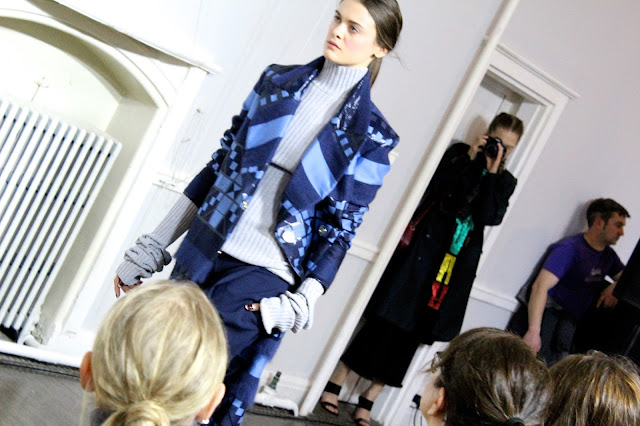 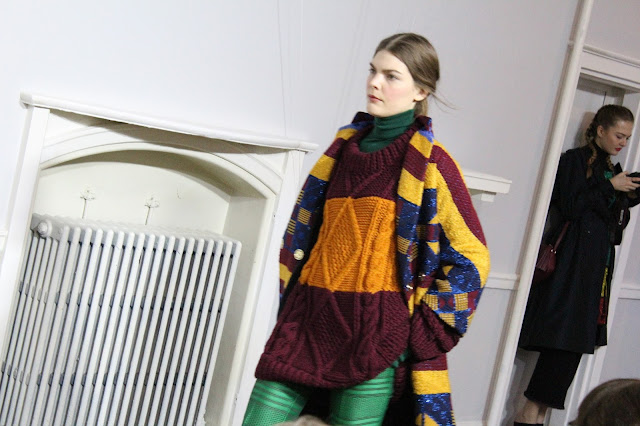 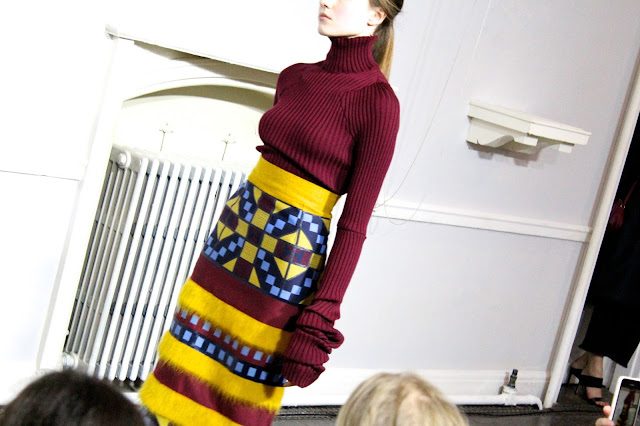 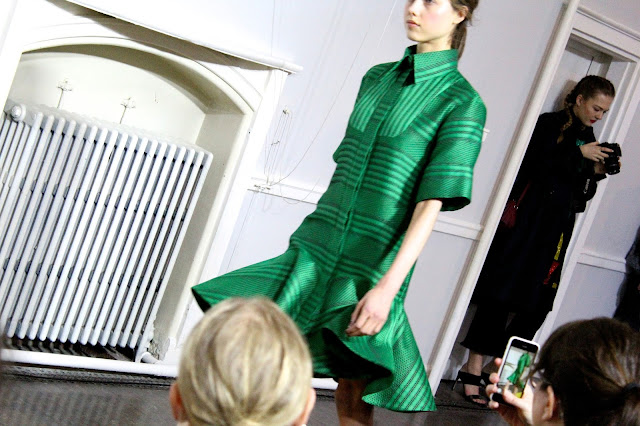 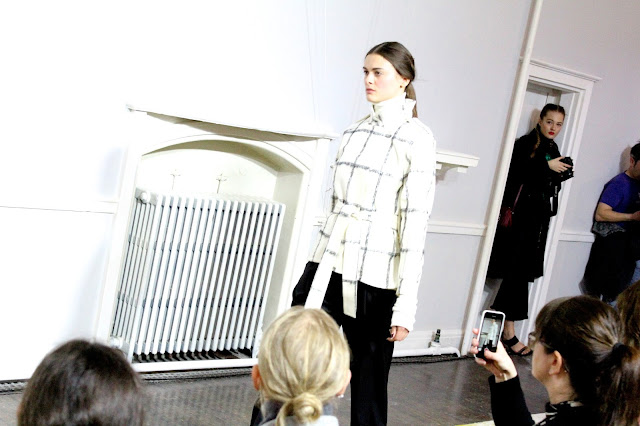 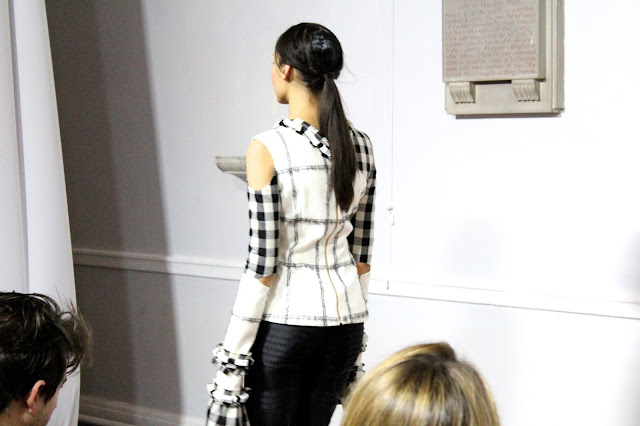 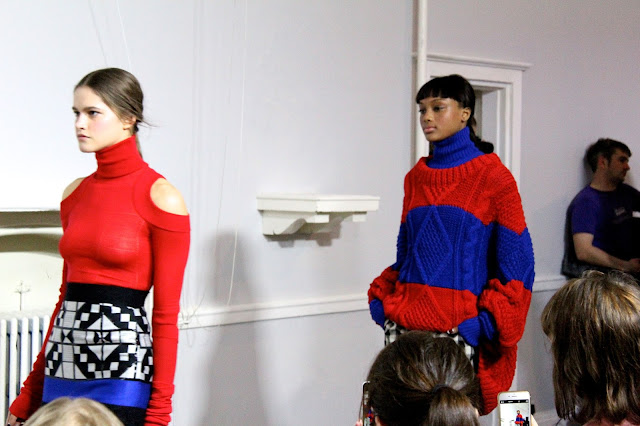 Danielle Romeril’s NEWGEN support has lasted longer than others. She certainly deserves it. Her Fall 2016 collection touched on 16th century influences by way of a Dutch 80s nightclub and sporting references. Her lessons in deconstruction, texture and fabrication further prove the fearless spirit that the previous two collections featured in this post also bare. You can’t help but be swayed by her devilishly cool spirit and creative genius.

To reiterate my point from my recent review of her collection, "Challenging, yet not intimidating. These clothes will likely stir but that doesn’t diminish their wearability. In fact, if I remember correctly, Danielle was sporting those black trousers and a netted blouse. It’s always great to see a designer in their own designs. She graciously ushered journalists around the collection. Good things happen to good people." 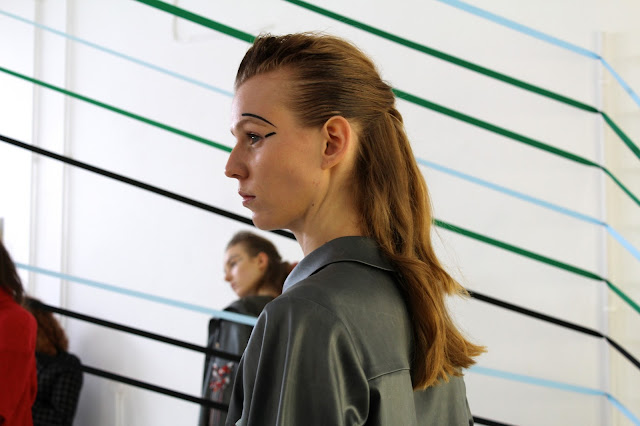 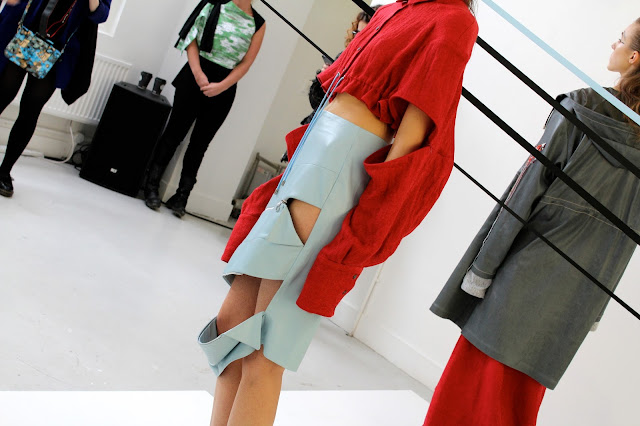 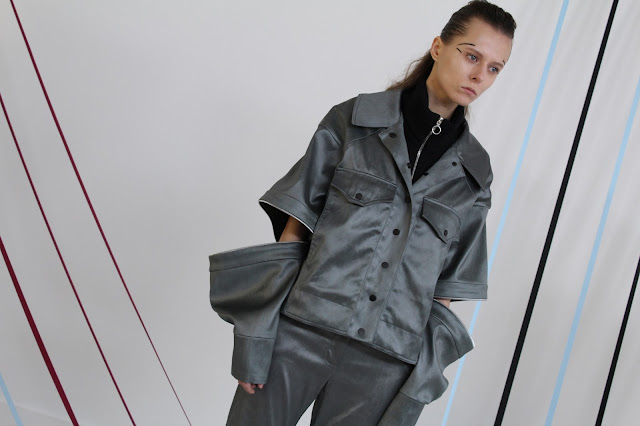 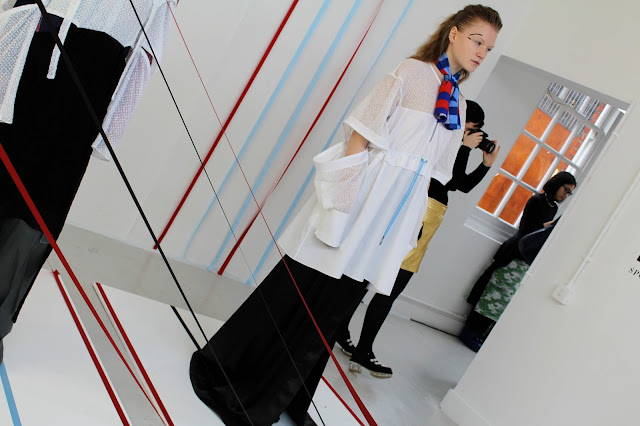 This leads me to Simone Rocha, another exceptional young talent. On New Year’s Day, as is tradition for some families, Simone partook in a chilly swim in the west of Ireland. It led to the idea of “rebirth” seen in her Fall 2016 collection. She certainly kicked off the year with a collection likely to go down as her best. Then again, I’ve had to regurgitate that line for every season in recent memory because it keeps getting better and better. Her perversely romantic wares have garnered international recognition and you’ll find her positioned on the best collections of the seasons from Vogue Runway and The Business of Fashion. 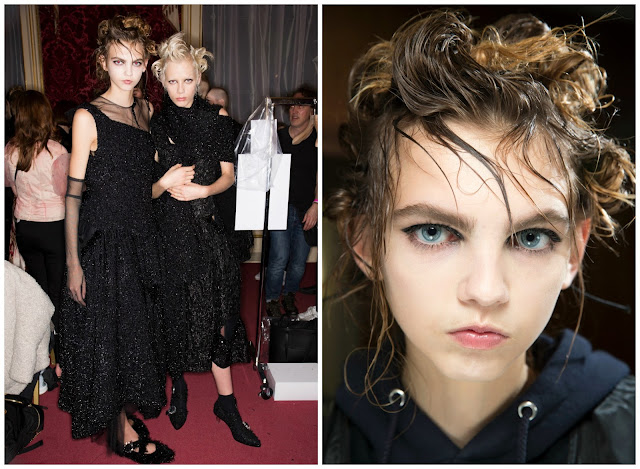 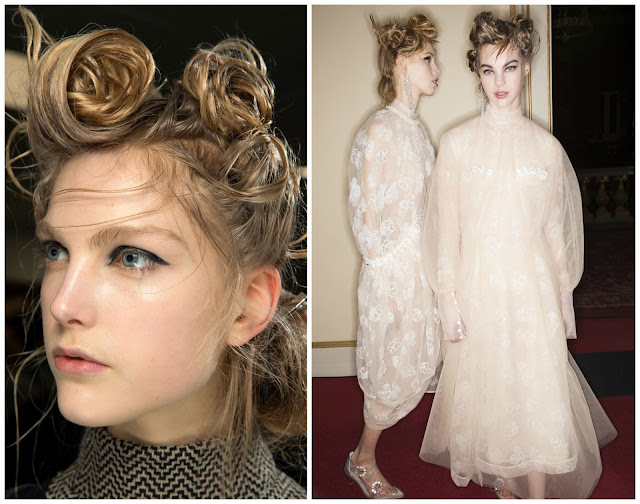 Richard Malone is a promising designer from Wexford who has had the honour of presenting as part of Fashion East for the past two seasons. Inspired by his working class background and his family, his collections are for those with a sense of humour and a value for unabashed creativity. His Spring collection was inspired by his mother’s Argos uniform and for Fall it was his aunt’s attire at his communion that influenced the collection. There’ll be more on that a later date. For now, enjoy images from his standout collection presented in February. 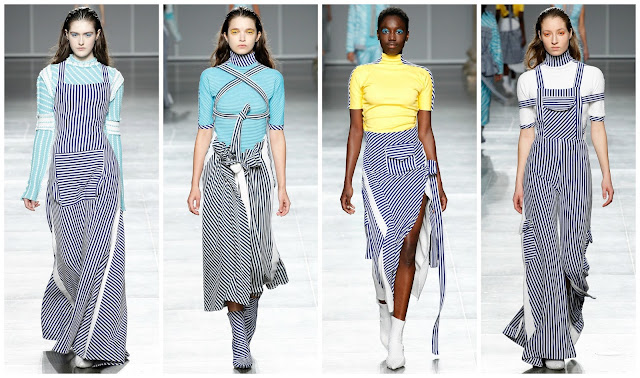 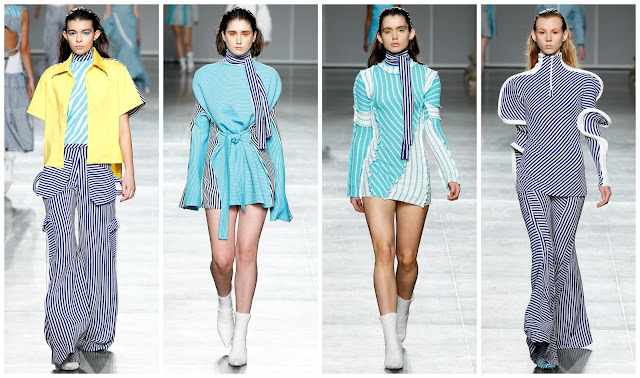